Today, obviously, was not a good day for anyone who had funds invested in global equities.

The financial sector continues to pile up stunning losses. US -- and no doubt global -- manufacturing continues to contract. Trade continues to shrink -- though the details of Korea’s February trade data offer a bit of hope that the fall in trade is slowing.

The countries that didn’t have credit-fueled housing booms are suffering along side the countries that did, in no small part because the world’s surplus countries relied on the world’s deficit countries for demand. Paul Swartz of the Council on Foreign Relations Center for Geoeconomic Studies plotted the fall in output in q4 2008 among the G-7 countries. The fall (presented as an annualized quarterly fall) was as large in Germany and Japan as in the US and the UK. 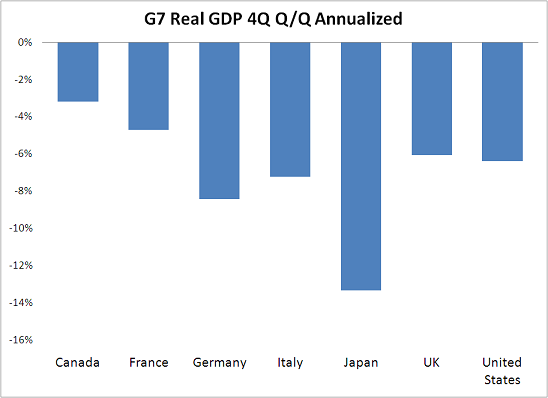 The data on industrial production -- presented as a year-over-year fall -- tells a similar story. 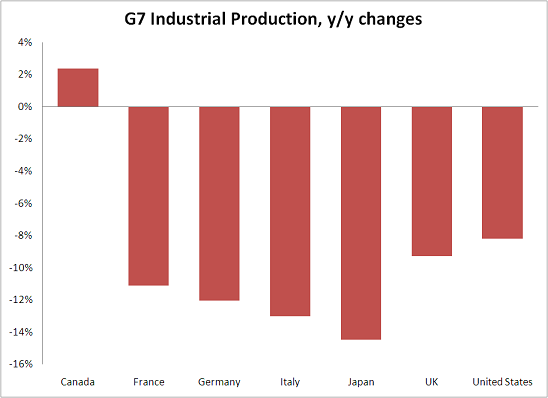 The G-7 countries are all contracting. And, alas, a host of emerging economies are contracting even more. It shouldn’t be a surprise that Merrill has joined BNP Paribas in forecasting that global growth will dip below zero in 2009. The big issue globally is how to shift out of the current dynamic, one where weakness in demand in one country generates further weakness in all of its trading partners -- and one where financial losses in one part of the globe trigger reductions in lending throughout the world, and thus add to the global credit crunch.

It is amazing how quickly a world marked by seemingly infinite amounts of liquidity were available and anyone who wanted credit seemed able to get it turned into a world where few financial assets (other than government bonds) are liquid and few (other than the G-7 governments) can get credit. Some strong self-reinforcing dynamics must have been at work on both the way up and the way down. Adrian and Hyun are on to something important.

Secrets from the Treasury’s Survey: It looks like China bought a lot of equities just before the stock market tumbled