Sovereign wealth funds, many argue, aren’t new. Kuwait set up its fund in the 1950s, Abu Dhabi’s fund was established in the 1970s.

True enough. But this argument still misses a key point.

In the past, these funds were small. Now they aren’t. The existence of sovereign funds isn’t new. But their current pace of growth is. They now have a far bigger impact on the global economy – and particularly cross-border capital flows – than in the past.

And with oil now trading above $125 – and, at least according to Goldman – set to rise further, the Gulf funds in particular are poised to get even bigger. Fast.

We still don’t know exactly how big the Gulf funds now are. Abu Dhabi continues to insist that it cannot match Kuwait’s level of transparency. We also don’t know quite how big they will become. But it isn’t all that hard to come up with a guess.

If oil averages $115 over the course of 2008 (a price consistent with $125 a barrel oil for the rest of the year), the Gulf’s current account surplus should approach (if not top) $350 billion. The big existing Gulf funds (Qatar’s fund, Kuwait’s fund and Abu Dhabi’s fund) should get about $150 billion of surplus oil revenue to invest abroad. The Saudi Monetary Agency (and the new Saudi investment fund) should get another $200 billion.

The math isn’t hard. Brad Bourland calculates that the Saudis’ oil export revenues top $1 billion a day if oil is above $115 a barrel. The Saudis only need $55 a barrel oil to cover their budget. The rest is stashed abroad. And even more will have to be stashed abroad if the Saudis follow the IMF’s advice and tighten fiscal policy to fight inflation …

Rachel Ziemba and I have been trying to update our analysis of the Gulf’s foreign assets – and a key part of our analysis is trying to better understand how the big Gulf funds have evolved over time. Since the key Gulf funds don’t report data, this involves making some big guesses. However, it should be possible – using the information that the Gulf funds have released about the contours of their portfolio (most of the Gulf sovereign funds, for example, seem to have around 60% of their portfolio in equities) – and the balance of payments data to produce some estimates.

Our preliminary estimates suggest that there is something new about the current size and pace of growth of the Gulf funds. The 2008 increase in the foreign assets of the Gulf oil exporters should be roughly comparable to their total foreign assets at the end of 2000.

There are two major sources of uncertainty about the size of the Gulf’s official portfolio.

The first stems from the lack of data about ADIA, the largest fund in the Gulf. If – as the Wall Street Journal reported in late 2000 -- ADIA only had about $150 billion at the end of 2000 and if its returns matched the returns on a set of broad market indexes, ADIA might only have $500 billion or so today. That is well below most estimates -- and below the trajectory implied in the graph above. To get a total in the $600-700 billion range (as in the chart above) ADIA had to have a sizeable emerging market equity portfolio and to have picked fund managers that outperformed the market. We didn’t explicitly try to model ADIA’s (assumed) participation in some high-flying (until recently) private equity funds; that could be one source of out-performance. And even the $600-700 billion portfolio above is far smaller than some market estimates.

The second is that the Saudis are now rather consistently hinting -- see Henny Sender’s FT article -- that they don’t disclose all of their assets. The chart is based only on the Saudis reported assets.

Generating a picture requires making some big assumptions. The potential for error is enormous. But there is little doubt that the Gulf funds grew significantly from 2003 to the end of 2007, propelled both by the rebound in global equities from the .com crash and large oil inflows. And there is even less doubt that $125 a barrel oil implies even more rapid expansion. 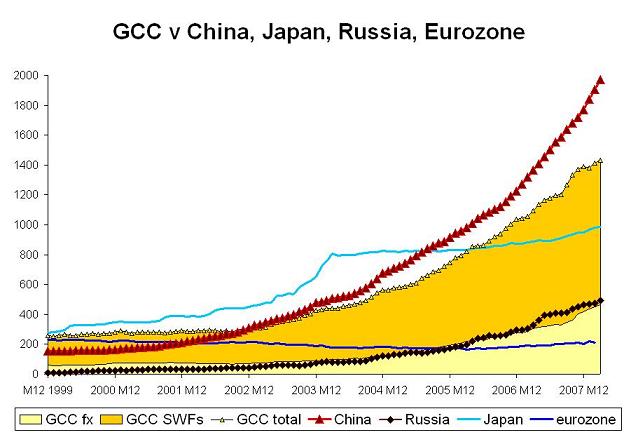 The resulting shift in global financial firepower -- a shift toward Asia, Russia and the Gulf; a shift toward sovereign investors; and a shift away from democratically-elected governments -- is staggering.

Norway was against Iceland before it was for Iceland