Over the past twenty years, the biggest shocks to the global economy have come from sharp swings in financial flows: Asia; the subprime crisis and the run out of shadow banks in the United States and Europe; and the euro area crisis. All forced dramatic changes in trade flows. Emerging Asia went from running a deficit to a surplus back in 1997. The global crisis led to a significant fall in the U.S. external deficit. The euro area crisis led to the disappearance of current account deficits in the euro area’s periphery. And one risk from Brexit is that it would cause funding for the U.K.’s current account deficit to dry up, and force upfront adjustment.

The biggest shock to the global economy right now though has come not from last summer’s surge in private capital outflows from China, large as the swing has been,* but rather from an old fashioned terms-of-trade shock. Oil, iron, and copper prices all fell significantly between late 2014 and today. Yes, oil has rebounded from $30, but $50 is not $100 plus.

$50 versus $100 oil means the oil-exporters collectively have something like $750 billion-a-year less to spend—either on financial assets, or on imports—than they did a couple of years ago. Add in natural gas and there has been another $100 billion plus fall in export income for the main oil-exporting economies. The fall in traded iron ore prices has had a big impact on Brazil and Australia, but in absolute terms oil’s impact dwarfs that of iron. Brazilian and Australian iron receipts in the balance of payments are down a total of $30 to $40 billion. Big, but not the huge impact of oil.

And the old fashioned terms-of-trade shock has had a much bigger global impact than I suspect is commonly realized. Consider a plot of non-oil imports of the “BRICS” (the world’s large emerging economies). 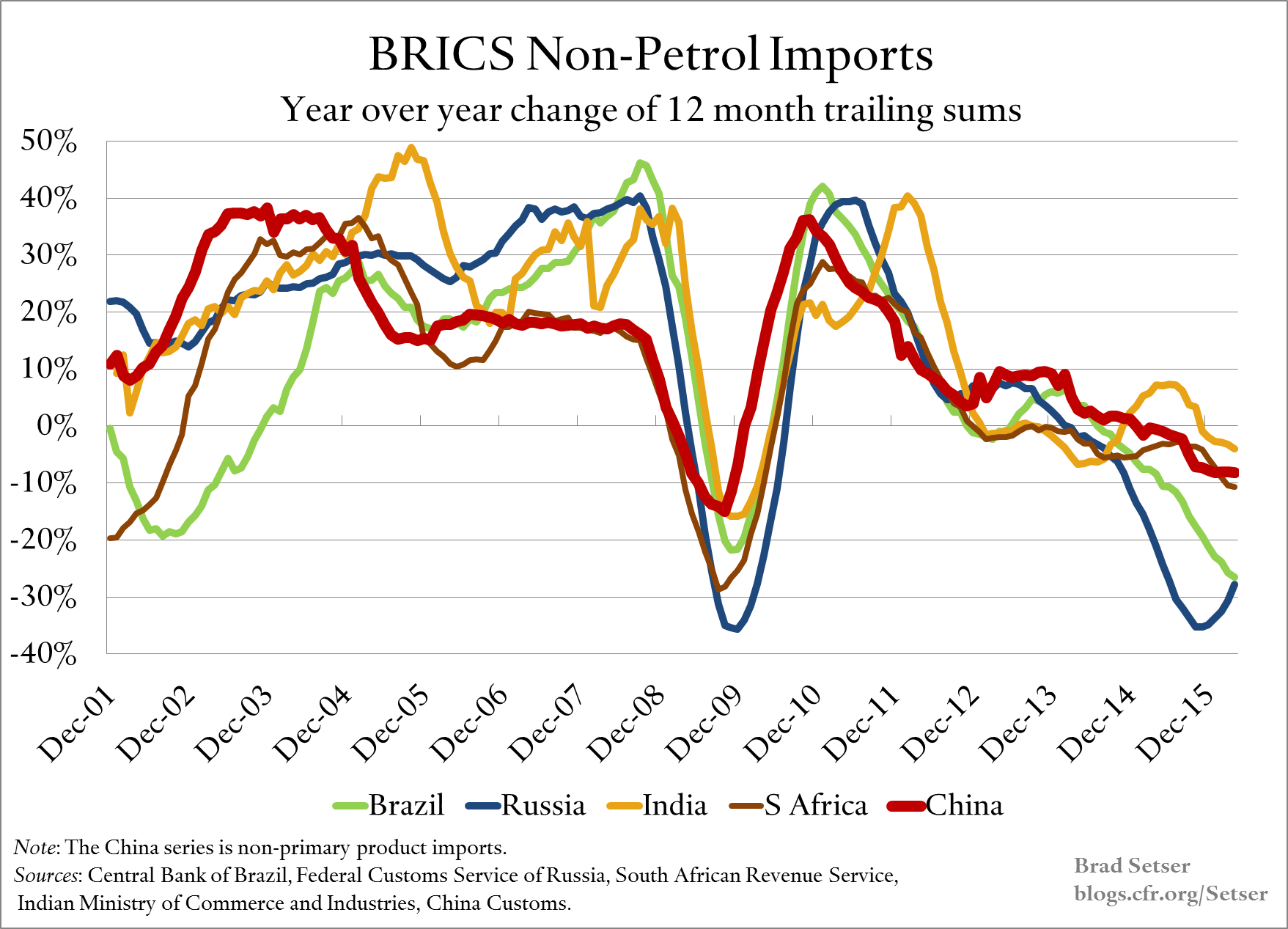 With some notable exceptions, commodity-exporting economies, writ large, have adjusted to the global terms-of-trade shock by reducing their imports rather than by selling assets or increasing their borrowing. A negative terms-of-trade shock implies a fall in trade. A country that cannot get paid what is used to on its exports cannot import (as much). It is a simple point, but still an important one.

The adjustment in commodity exporting economies is a very important reason—along with China’s pivot away from imports—why global trade flows have been weak.

The BRICS combined GDP is roughly that of the United States, or the full European Union. Their combined non-oil imports fell by a bit over 10 percent in 2015. Excluding commodities, China’s imports in 2015 were down around 8 percent. The non-petrol imports of the other four BRICS were down over 15 percent.

To be sure, the data here—the year-over-year change in the trailing 12 month sum—moves slowly. It tells a story about the past, not the present.** The big drops have already taken place. Higher frequency data points to a stabilization.

A big change for countries whose real imports on average increased 10 percent a year from 2004 to 2013.

** To take an example: the change in the trailing 12 month sum will show a big fall in the U.S. petrol import bill. But with U.S. production now dropping, crude imports rising and a near-certain rise in import prices from these lows, the U.S. petrol deficit is almost certainly now starting to rise again. The United States incidentally paid less than $30 a barrel on its imported oil in the first few months of this year.

More on China’s May Reserves