Before I launch into the post, I thought it might be good for me to introduce myself to you readers, since I’m going to be blogging pretty regularly in the coming months. I joined CFR last October as a fellow for energy and national security as part of a larger Sloan Foundation-funded initiative, the Program on Energy and National Security. I’m delighted to be a part of the CFR and am looking forward to working on this new energy program.

Before coming to CFR, I spent some time in academia and in financial services. On the academic side, I studied economics and finance at the University of Chicago, Cambridge, and Oxford. I did a bit of teaching in those areas at Oxford, which was fun (hopefully my students would say the same). While at Oxford, I spent some time working with the late Matthew Simmons, of Simmons & Co. Intl. (and a terrific guy, I might add), on private equity and non-profit ventures he was putting together in 2009–2010. Just before joining CFR, I headed up oil research at Louis Capital Markets in New York.

So that’s me. In terms of the blog, I’m planning on focusing mostly on the economic, political, and financial aspects of oil and natural gas. I’ll venture a little further afield from time to time into financial markets or the broader economy. I’m going to make charts and graphs a feature of my posts, since they’re a great way to capture trends and relationships and don’t take long to digest.

Today’s topic: a hidden U.S. export boom. There’s starting to be more and more coverage in the mainstream media, but I still wonder whether it’s sunk in to most Americans just how historic the changes going on right now in oil production in the United States really are. Last year, for the first time since the U.S. Energy Information Administration (EIA) began comprehensive data (in 1993), annual U.S. crude exports of petroleum products exceeded imports in 2011 (see Figure 1). 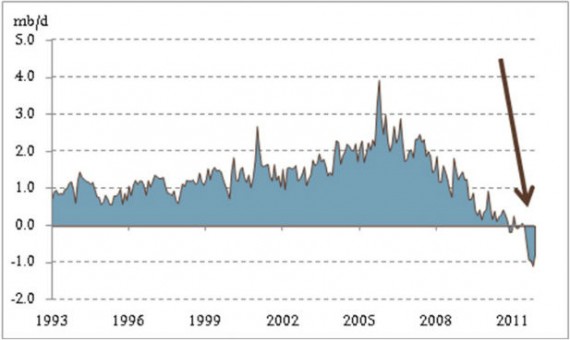 U.S. refineries sent away an average of 380 thousand barrels per day (kb/d), on a net basis, last year. That is a steep and remarkable drop from years past. In October 2005, net imports were just shy of 4.0 million barrels per day (mb/d).

The trend is even more remarkable in individual product categories, for which U.S. Department of Energy data extend back to 1945 (Figure 2). Unlike total U.S. net import data, data for the two major refined products, motor gasoline and distillates (a category that includes diesel and heating oil), are available reaching back to the end of World War II. The last time the United States was a consistent net importer of finished gasoline was in 1959. Net distillate imports oscillated between positive and negative territory during the early 1990s, but the United States hasn’t consistently imported diesel and other distillates since the 1950s. 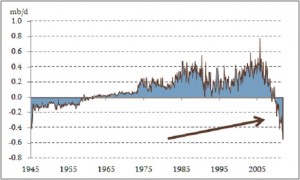 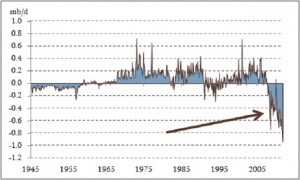 Where has the oil been going? Mexico and Brazil have become two major customers, among others (Figure 3). As of November 2011, net exports of petroleum products to Mexico had risen to nearly 600 kb/d, a record level, while the net flow to Brazil was a volatile 137 kb/d. 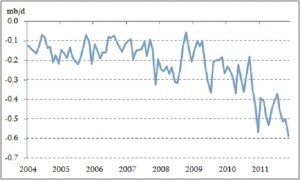 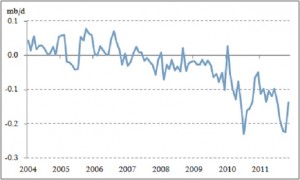 An equally dramatic story has been playing out in the flow of products to and from OPEC member countries (Figure 4). Just 5 years ago, OPEC sent 1.0 mb/d (net) to the United States. That quantity has fallen markedly. Net imports from OPEC are still positive, but not by much—a paltry 230 kb/d on average since 2010. 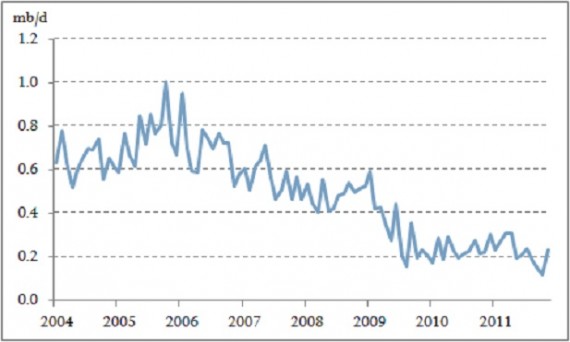 U.S. exports of petroleum products are booming (Figure 5). After remaining stagnant between 750 kb/d and 1.0 mb/d between 1990 and 2005, exports began to explode higher. The trend is still in its early stages. I don’t think it’s one that will live and die based on how fast the U.S. economy recovers—Figure 5 clearly shows that exports were moving higher before the Great Recession began in 2007, though the slowdown in the U.S. appears to have catalyzed the boom. 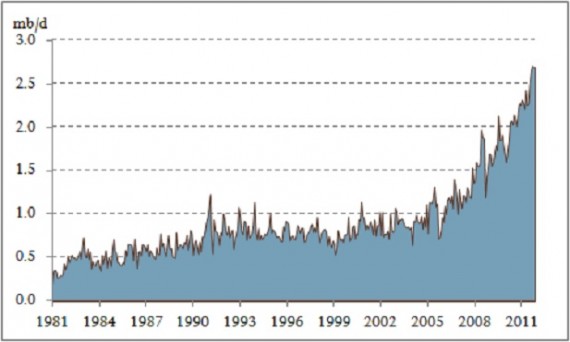 So what’s behind the trend? I’d point to four forces. First, North American oil production gains have reduced the country’s reliance on imported oil—not just products, but crude as well—as more oil came from Canadian and U.S. sources. Second, economic growth in Central and South America that outpaces that of the United States is leading to quicker fuel consumption growth in these markets, which is pulling additional volumes south of the border. Third, geographic proximity and highly efficient refining capacity in the Gulf of Mexico means that growing oil streams, from Canadian heavy to U.S. unconventional, are being sent to the Gulf, from which refined products are then sent outward. Fourth, U.S. law mandating the use of ethanol as a gasoline additive has reduced domestic demand for conventional gasoline and boosted supply.

I wouldn’t bet against the export boom in the coming decades, either. I don’t think it’s a flash-in-the-pan phenomenon. I agree with forecasts that see Canadian heavy crude production, at 1.1 mb/d in 2005, coming close to tripling by 2015, while U.S. shale oil production could swell to 3.0 or so mb/d by 2020. The Gulf Coast remains the obvious refining outlet for these liquids. Although the pace of fuel demand growth in the United States may come close to returning to pre-recession levels if the European crisis passes, it will likely increase even more rapidly in Brazil and elsewhere in Latin America. Economic growth in Latin American and the Caribbean should on average be significantly faster than in the United States in the coming years. The IMF sees the growth differential narrowing from 3.1 percentage points in 2009 to 1.7 in 2013, but that’s still a wide margin.

The implications of the trend for the economy and policy? More on that later. But for now, a remarkable boom that highlights just how quickly things are changing on the American energy scene—to the benefit of the United States.

What If We’re Wrong About Natural Gas?