How do Americans see India as a power on the world stage? It’s a difficult question to answer, in part because sources of data are scattered and insufficient. Public opinion surveys have provided a good sense of how Americans see India as a country, and its importance to the United States, but those lenses do not necessarily offer insight into American views about India on the world stage. The just-released 2015 public opinion survey from the Chicago Council on Global Affairs, however, for the first time contains some insights sure to surprise on how Americans see Indian power.

In assessing American public opinion toward India generally, the Chicago Council’s previous surveys have fielded questions about how “warmly” respondents feel toward particular countries, using a thermometer scale from zero to one hundred. This year’s survey does not contain thermometer ratings, but those previous provide a sense of the past trajectory. Not surprisingly, the warmth that Americans feel toward India has been inching up. In 2006, the “thermometer rating” was forty-six, and two years later it had risen to forty-seven. By 2010 the temperature had risen to fifty-three, and remained there in 2014. So Americans see India somewhere in the middle of the warmth scale—not at the level of neighbor Canada (a seventy in the 2014 survey) or the UK (seventy-four), but not as cold as China (forty-four).

The previous surveys establish fairly clearly that Americans see India somewhere in the middle of the pack—viewing the country with middling warmth, and seeing it in the main as “somewhat” important to the United States. So the Chicago Council’s newly released survey builds on that portrait. This year’s survey also breaks down many of its questions along partisan lines, which gives a helpful sense (especially now that the presidential campaigns are underway) of how Democrats, Republicans, and Independents view issues in foreign policy.

And the results do surprise. In a question about how confident Americans would feel in a country’s ability to “deal responsibly with world problems,” a very meagre 34 percent of Americans overall either had “a great deal” or “a fair amount” of confidence in India (Appendix Figure 4). That puts India on par with China, and two points behind South Korea. Even more interesting is the significant partisan gap in answers to this question. Democrats had much more confidence in India’s ability to deal “responsibly” than Republicans—a full fourteen points more. Still, India does not break the 50 percent mark with either party. Some 41 percent of Democrats had “a great deal” or “fair amount” of confidence in India’s handling world problems, and just 27 percent of Republicans answered the same way. For Independents it was 34 percent. 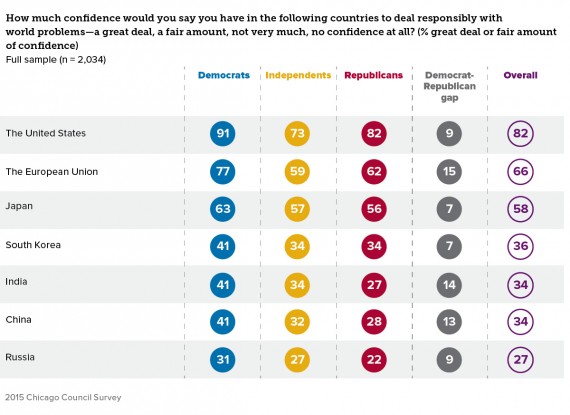 A much more bipartisan view comes through in the question about desirability for a country to “exert strong leadership in world affairs” (Appendix Figure 5). Overall, 63 percent of respondents see a strong Indian role in the world as either “very” or “somewhat” desirable. The gap between Democrats and Republicans narrows here, just five points. More Democrats than Republicans—67 percent to 62 percent—see Indian global leadership as very or somewhat desirable. India rates higher on this question than South Korea (62), China (51), or Russia (43), but below Japan (73) and the EU (80). 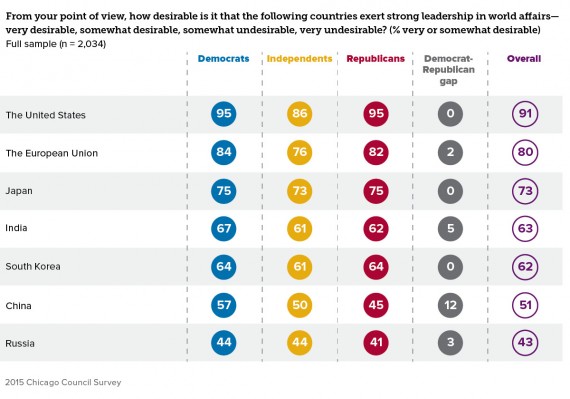 Putting this all together, we can see that Americans have a better-than-middling desire to see greater Indian leadership in the world. But we aren’t quite sure whether India will “deal responsibly” with problems—although Democrats are more likely than Republicans to think so. Combined with the medium-warmth thermometer rating, and the 50 percent view that India is “somewhat important” to the United States, it’s clear there’s still some work ahead before the American public see India as a front-line global partner.