There’s a lot of buzz today about new projections for U.S. oil imports showing that imports are poised to continue diving. The Financial Times captures the essence well with the headline “U.S. oil imports to fall to 25-year low”, referring to projections through 2014. I’ve written before about the risks of focusing on imports rather than consumption. If you want to focus on imports, though, the number to drill down on isn’t the volume of imports – it’s spending on imports as a fraction of GDP. Alas, by that measure, despite a positive trend and strong improvements over the last decade, the United States will remain in worse shape next year than in any year between 1983 and 2003.

Let’s start by taking a quick step back. To the extent that U.S. dependence on imported oil is consequential, that’s either because spending on imports bleeds the U.S. economy, or because volatile import bills hurt the United States. The first problem is measured directly by U.S. spending on imported oil relative to U.S. GDP. The second problem can be measured indirectly by the same figure: everything else being equal, the higher the baseline for U.S. import spending is, the greater the economic impact of a given oil shock will be.

The chart below shows U.S. spending on oil imports as a fraction of U.S. GDP. It incorporates the new projections for next two years by assuming that one-quarter of U.S. imports (i.e. imports from Canada) are priced at WTI and the rest are priced at Brent, and assumes 2.2 percent GDP growth (the results aren’t sensitive to this choice). The underlying data comes from the EIA and FRED. 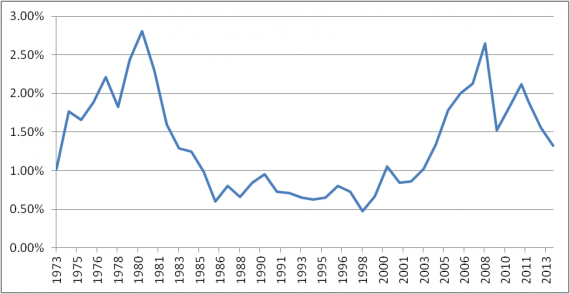 The result is clear: imports measured in value relative to the size of the economy aren’t anywhere close to their 25-year lows. (This is because lower import volumes have been substantially offset by higher oil prices.) The result is that projected import spending as a fraction of the economy is higher than import spending was in 1973, the year of the first modern oil crisis. It isn’t far below the figure for 1978, the year before the second crisis hit. And it is double its level in 1988, the year before Saddam Hussein invaded Kuwait and touched off an oil-centered crisis. Reaching the low mark for the past 25-five hears, achieved in 1998 at 0.45 percent of GDP, would require U.S. imports or prices to be slashed by a factor of four from their 2012 levels.

There should be no question that the decline in U.S. imports – and, more fundamentally, the production gains and consumption curbs behind it – is good news. But, with oil prices appearing fairly steady at historic highs, it’s important to keep that in perspective.

[Note: This post has been updated to include projections for 2014; its qualitative conclusions are unchanged.]

Drilling into the American Energy Boom, in Four Charts