As the public debate over Hurricane Sandy turns in part from the immediate impacts of the storm to its possible links to climate change, a new theme is emerging: Sandy is not just part of a new normal – scientists actually predicted it well in advance.

One of the most prominent exhibits being used to back this case is a paper (PDF) published in Nature Climate Change earlier this year by Ning Lin, Kerry Emanuel, Michael Oppoenheimer, and Erik Vanmarcke. One blogger described it with the following headline: “Peer Reviewed Research Predicted NYC Subway Flooding by #Sandy”. CNN went with the following:

“[Scientists are] telling us we shouldn’t be surprised that this 900-mile-wide monster marched up the East Coast this week paralyzing cities and claiming scores of lives…. In a paper published by Nature in February, [Oppenheimer] and three colleagues concluded that the ‘storm of the century’ would become the storm of ‘every twenty years or less.’ New York Gov. Andrew Cuomo agrees. ‘After what happened, what has been happening in the last few years, I don’t think anyone can sit back anymore and say ‘Well, I’m shocked at that weather pattern,’’ Cuomo said Tuesday.”

The Lin et al paper is meticulous and absolutely fascinating. (I particularly recommend reading the introduction for a primer on how climate change does and doesn’t influence storm surges.) Everything that Oppenheimer told CNN is sound. But the paper does not say what the journalists and pundits claim or suggest that it does. A more careful reading of it points to more subtle – and intriguing – conclusions.

The Lin et al paper uses four different climate models to estimate the frequency of different storm surges at New York’s Battery both under present conditions and, assuming rising greenhouse gas emissions, in a hundred years. The results are summed up in this figure: 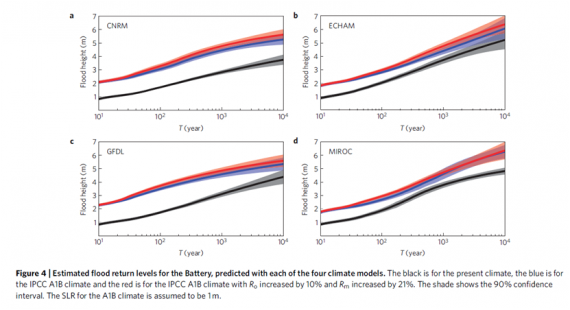 What do their models say about the present probability of a 4.16 meter flood surge, which is what we saw during Sandy? One of the four models says that it’s probably a less-than-one-in-ten-thousand-year event given current climatic conditions. A second model puts the odds closer to one-in-eight-thousand-years or so. (Take these numbers with a big grain of salt – I’m reading them off the above figure with a ruler.) The final two models put the odds at between one-in-two-thousand and one-in-three thousand. The models themselves, of course, have internal uncertainty, which the paper takes into account. But even the most foreboding of the analyses suggest that there is at most a one-in-ten chance that surges like the one we saw this Monday have become more-than-one-in-a-thousand-years-or-so events. The takeaway here is simple: none of the models said that the storm was anywhere remotely close to likely given current climate conditions. The message from those models is pretty much that Sandy was a very unlucky fluke.

The far more worrying part of the paper is what it projects for the future. I’m a focus-on-risk guy so I’m going to concentrate on what the paper says is unlikely but plausible. What the paper basically says is there’s a one in ten chance that storms like Sandy will become one-in-a-few-hundred year events. But the paper also says that flood surges north of about 1.5 meters – currently enough to create flooding in downtown New York – will go from one-in-nearly-a-hundred-year events to something that happens more than once every decade.

What I would really love to see (and I know that this isn’t simple to do) is a backcast from Lin et al that estimates what the likelihood of a Sandy-scale flood surge would have been a hundred years ago. That would help us answer the question on everyones’ minds: how much did climate change contribute to Sandy?

Hurricane Sandy: Is There Anything We Can Do About Climate Change Soon?