Quick answer. A lot. Between $1.3 trillion and $1.4 trillion, or about 40 percent of China’s reserves. The last year has made it abundantly clear that Belgium’s holdings of Treasuries aren’t from Belgian dentists. China’s reserves started to fall last summer. Yet China’s reported holdings of Treasuries in the custodial data barely budged. Belgium’s holdings, by contrast, fell by around $200 billion. It is now standard among those who care about this stuff to add Belgium’s holdings (between $80 and $90 billion in long-term Treasuries, and $154 billion if you count Treasury bills) to those of China ($1245 billion).

A more interesting question, one that takes a bit more technical wizardry to report, is how many U.S. assets China holds. The right answer, I think, is at least $1.8 trillion and perhaps more. That is somewhat less than China used to hold—but still quite a lot. In addition to Treasuries, China has $200 billion or so in Agencies, and $200 billion or so in U.S. equities, and close to $100 billion on deposit in U.S. banks. That is more or less in line with expectations for a country with $3.2 trillion in reserves. 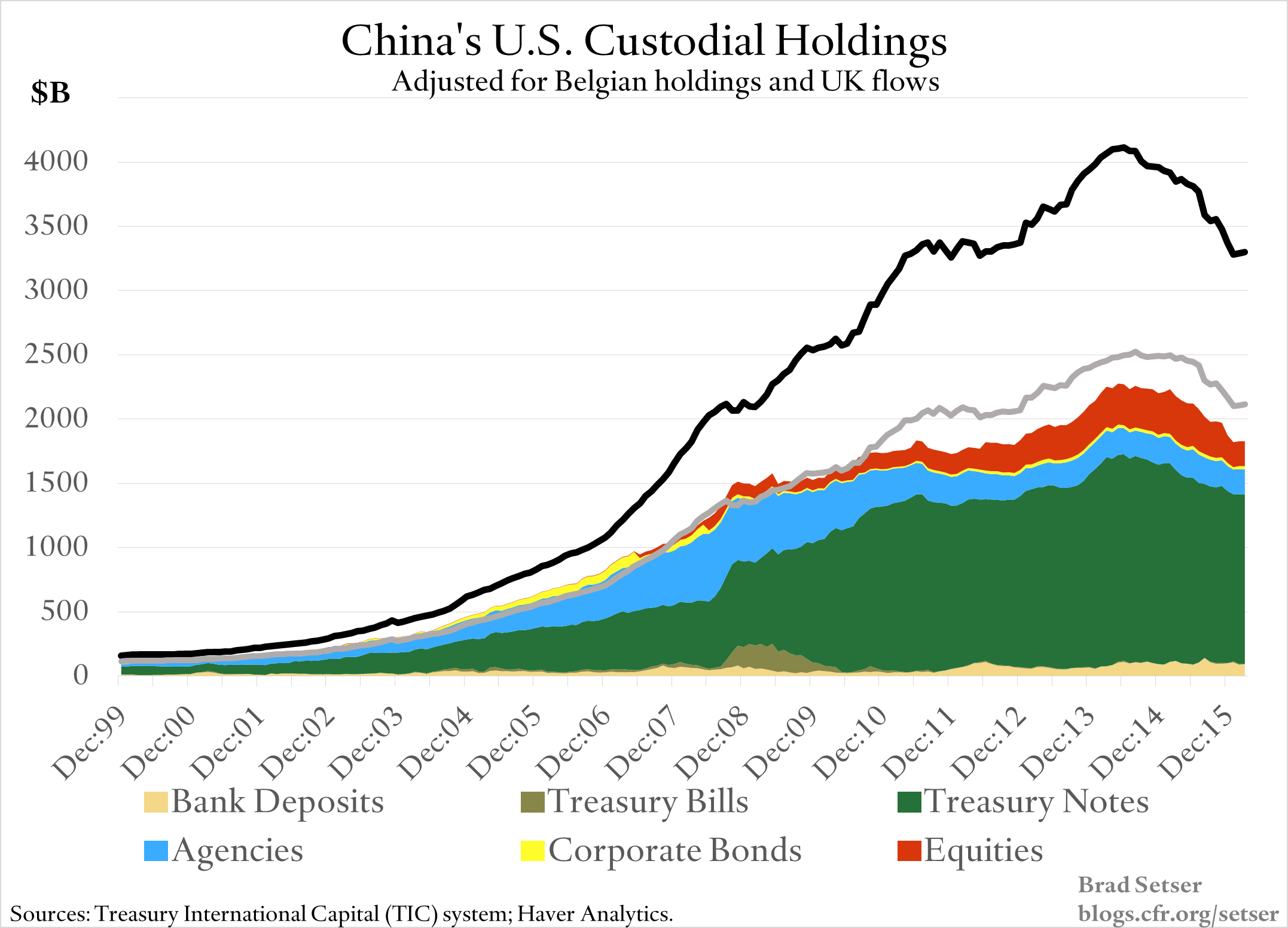 I actually lied about the technical wizardry required. Now that the Treasury reports monthly custodial holdings of all kinds of debt along with custodial holdings of U.S. equities, the amount of skill required isn’t very high. You just need to know where to look. (Historical data is here)

I do still have a few tricks up my sleeve. After all, the trick to Treasury International Capital (TIC) watching is looking at changes over time, and trying understanding the resulting patterns. The art comes in making the adjustments needed to make the custodial data better map to the transactional data.

If you want a continuous time series that goes back to the start of China’s reserve accumulation, you need to extrapolate between the annual custodial surveys from 2002 to 2012. Using, in broad terms, the methodology outlined here, that can be done with a fair amount of sweat, toil, and tears. After 2012, the Treasury provides a continuous monthly data series.

The resulting graph of China’s U.S. portfolio holdings (really a close up of the initial graph) relative to the amount of dollars China would need to hold to have a dollar share of reserves in line with the global average does tell a set of stories.** 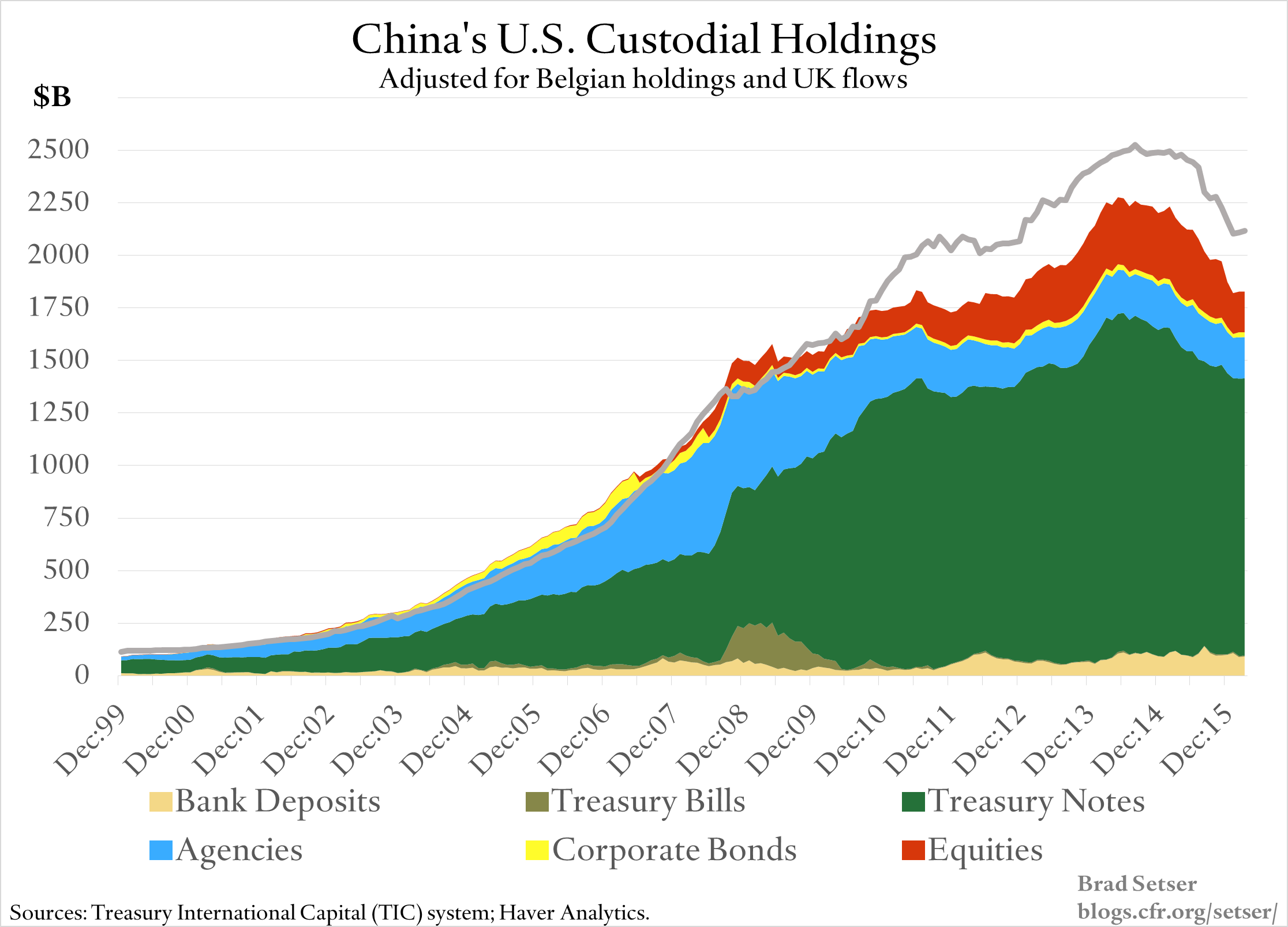 Between 2005 and 2007 the dollar share likely fell from around 70 percent to around 60 percent. Almost all of that fall shows up in the U.S. custodial data. At the time, though, the custodial data was only published once a year.

And since then there has been one other significant move. Starting in 2010, China’s visible U.S. holdings —counting wee little Belgium’s Treasury holdings—fell from around 60 percent of its portfolio to a low of around 50 percent. And if anything China’s visible holdings are now rising back toward 60 percent.

But I also suspect that after the global crisis the change in China’s U.S. custodial holdings doesn’t fully capture the evolution in China’s holdings of dollar-denominated assets.

What really happened in 2010? The TIC data is silent there.

One possibility is that China could have made greater use of offshore custodians (like Belgium and Luxembourg) so that its true holdings stopped appearing cleanly in the data. China’s holdings of corporate bonds for example, are almost certainly higher than reported in the TIC data. China could have started buying more non-dollar assets—euros, Australian dollars and the like. I could be missing an important adjustment to the data. There is a bit of work required to find the best fit. I have erred on the side of minimizing the needed adjustments for the sake of transparency.

Another possibility is China started lending a portion of its reserves (through complex mechanisms, like entrusted loans) to other emerging economies while still counting these less than liquid assets as reserves. We know from a Chinese data set that the foreign loans of the state banks started to increase around this time. I used to think this was a big part of the story. Back in 2013, Caixin reported that the China Development Bank (CDB) was tapping China’s reserves for financing: "The initiative is an offshoot of a forex lending service started in May 2010, when a SAFE [State Administration of Foreign Exchange] affiliate called the Central Foreign Exchange Business Center signed the first loan agreement of its kind with the government’s policy lender China Development Bank (CDB)...CDB has tapped the reserves for more than two-thirds of the US$ 250 billion in foreign currency loans that it has issued to clients since May 2010." Now I am less sure, as China’s Special Data Dissemination Standard (SDDS) reserve disclosure shows that almost all of China’s reported reserves are in securities, and China also reports over $200 billion in non-reserve foreign assets. The non-reserve foreign assets could be things like PBOC’s deposits at the CDB that finance the CDB’s entrusted loans.

And what has China sold over the last year as reserves fell? The answer seems to be both Treasuries and U.S. equities. The fall in Treasuries shows up in the change in Belgium’s holdings, not the change in China’s holdings. Between December 2014 and March 2016 the long-term Treasuries held by Belgian custodians fell from $321 billion to under $90 billion (data). 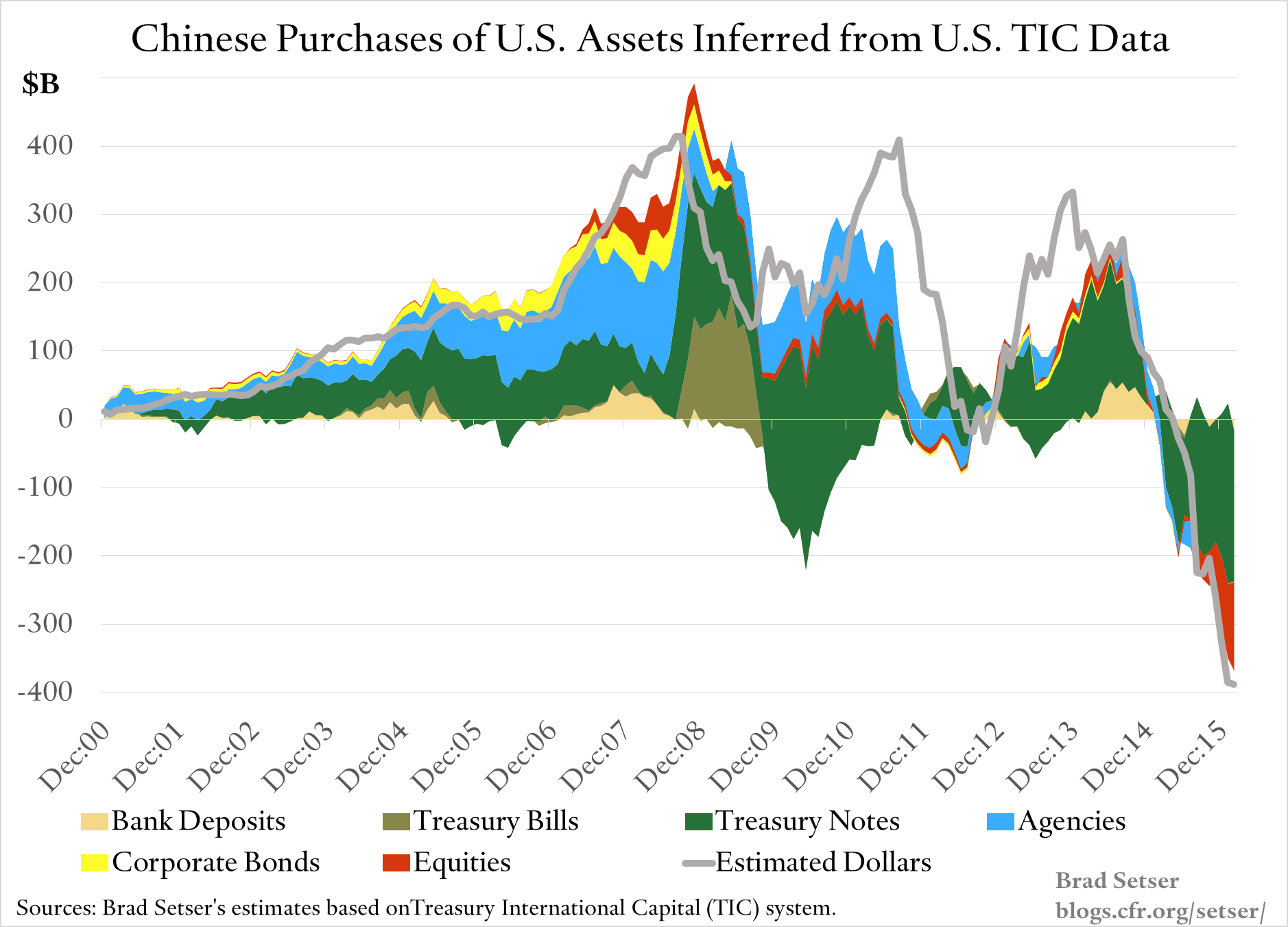 The apparent sales in the U.S. custodial data seem commensurate with the fall in China’s reserves. With maybe two-thirds of China’s reserves in dollars, a fall in reserves implies that China’s government will be selling reserves. Of course, private Chinese residents are building up their foreign assets and paying down their foreign debt. But private Chinese holdings tend not to appear in the U.S. data in any easy to track way. The U.S. data can still be used as a proxy, in my view, for the U.S. assets held by the China’s central bank and its sovereign funds.

The bigger story though is that there isn’t evidence to back up some of the scare stories circulating earlier this year. Unless China has pledged a big chunk of the Treasuries, Agencies and equities visible in the TIC data, China isn’t at all short on liquid reserves. China’s holdings of Treasuries—after factoring in Belgium’s holdings—and Agencies are still substantially bigger than Japan’s. Compared to its Special Drawing Rights (SDR) peers, China has no shortage of ammunition.

And—as I will discuss in another post—China’s government still has somewhat more foreign assets than it reports as reserves, thanks to foreign assets the state banks hold at the PBOC as part of the reserve requirement and the Chinese Investment Corporation’s (CIC) international portfolio. Unless its forward sales are a lot bigger than the $30 billion China has disclosed, China’s “true” reserves are probably a bit bigger than its stated reserves.

A lot though depends on how the CDB’s loans register in the data. And that is where I at least have the least certainty.

(*) China’s reported holdings of equities in the U.S. data are higher than China’s total (private) holdings of foreign equities in China’s net international investment position data, which is only possible if a meaningful part of the foreign assets of China’s reserve manager—SAFE—are in equities. A technique I use a lot is comparing China’s data on its foreign assets with external data that should measure the same thing, and finding the differences. Google "SAFE investments"; SAFE’s equity holdings aren’t exactly a secret.

(**) I have added the PBOC’s "other foreign assets" -- reported on the PBOC’s local currency balance sheet -- to China’s reported reserves. These are required reserves that the banks are hold in foreign currency rather than held in renminbi. This adjustment adds about $100 billion to China’s reserves right now. Confusingly, the "other foreign assets" reported by the PBOC and different than the "Other foreign currency assets" reported by SAFE in China’s SDDS disclosure. Similar name, but different things. And I have assumed that China’s dollar share is roughly equal to the global dollar share of reserves. A constant "65 percent in dollars" share would yield a similar estimate.

China’s Surplus is Rising Rapidly. So is the U.S. Deficit. The IMF Cannot Turn a Blind Eye.