Although it is probably a misattribution, Joseph Stalin is reported to have said, “A single death is a tragedy; a million deaths is a statistic.” Every year, between 55 and 60 million people die, while roughly 140 million people are born. According to the most recent estimate by the U.S. Census Bureau, there are approximately 6.96 billion people currently living around the world.

The nearly seven billion people alive speak to the spectacular progress and advancements of modern health care, specifically in the fields of infant mortality and health of the elderly. However, the vast majority of people who die prematurely are due to causes that are entirely preventable.

For example, over 90 percent of people worldwide will die from causes that do not make the headline news. Specifically, 29 percent of people in low- and middle-income countries will die from noncommunicable diseases (NCDs) before the age of sixty. In addition, the variation between countries in the crude death rate—average deaths per 1,000 people—is astonishing, and suggests that the international community and national governments could do much more to promote targeted and cost-effective preventive strategies.  The human, social, moral, and economic costs of these preventable and premature deaths are incalculable.

Mortality statistics are a grim and often misrepresented account of our short time on this earth. They are often grossly inflated to get the attention of the media or donors, or understated by governments or corporations to avoid culpability. Perhaps most significantly, mortality statistics do not account for the even greater number of people who suffer from chronic diseases, severe disabilities, or the social, environmental, and economic conditions that inhibit healthy and productive lives.

Nevertheless, in an era of increasingly limited government budgets, mortality statistics can be useful in considering how to most effectively prioritize preventive activities. If you were in a position of power and had say $100 million to spend on preventing premature deaths, where would your priorities lie?

For the latest mortality statistics from the World Health Organization, see below: 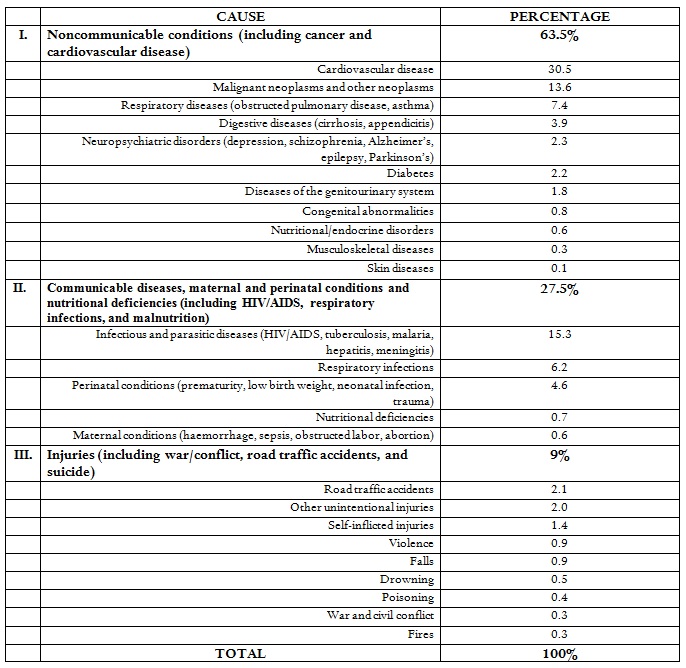 Reducing the Risk of a China-Taiwan Conflict