This is actually a well established pattern. The past five surveys of foreign portfolio investment in the US have all revised China’s long-term Treasury holdings up (in some cases quite significantly) even as they revised the UK’s holdings down. The following graph shows the gap between Chinese long-term Treasury purchases in the TIC data and China’s actual purchases of long-term Treasuries-- as revealed in the survey. With the help of Arpana Pandey, I have smoothed out the impact of the survey revisions. But when there is a hard data point -- say June 2006 -- the y/y increase in China’s Treasury holdings in the adjusted series should match the increase in the survey. 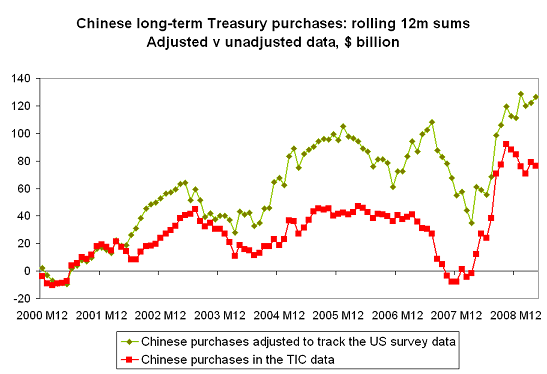 The last survey data point though comes from June 2008, so the subsequently data includes some estimates -- specifically estimates of the share of the UK’s Treasury purchases that should be attributed to China. I am pretty confident though that it is no more inaccurate than the published US TIC data, which systematically under counted Chinese purchases of long-term bonds over the last five years

Here are three signs to watch to know when China really is reducing its US holdings.

First, the TIC data should show a fall in China’s holdings, i.e. net sales of Treasuries.

Second, the TIC data should also show limited purchases of Treasuries through the UK. The fall in China’s holdings should not be offset by a rise in the UK’s holdings.*

Third, the Fed’s custodial holdings should not be rising at a strong clip -- as, given China’s size, it is hard to see how China doesn’t make up a large fraction of all custodial holdings. Mathematically, it is impossibe for China not to be largest holder of Agencies at the New York Fed, and it is hard to see why it wouldn’t also hold a decent chunk of its Treasuries there.

In April, only one of those three things happened. China’s recorded holdings fell. In my book, that doesn’t meet Accrued interests’ call for "hard evidence" that China actually is reducing its holdings. Not when there were also large purchases of notes through the UK, and in the past much of that flow has ultimately been reattributed to China. And not when there was a fairly strong rise in the Fed’s custodial holdings.

The best explanation for that combination of facts is that China was shifting a small fraction of its portfolio out of bills (hence the fall in it bill holdings) and into short-term Treasury notes (hence the rise in direct Chinese note purchase and UK note purchases).

The TIC data for China has too many problems to be taken at face value. Just using the unadjusted TIC flow data -- the kind that is often downloaded from Bloomberg -- to estimate China’s total purchases of US assets produces a result that doesn’t match the revised data in the United States final balance of payments data. Nor does it match the known stock of Chinese holdings, which gets bumped up when the survey data is released.

To be sure, the pace of growth in China’s overall US portfolio has slowed. That certainly reflects China’s decision to lend more money to a host of commodity exporters -- and its decision to stockpile key commodities. That has cut into the funds available to invest in the US.

And the pace of growth in China’s Treasury portfolio has also slowed.

But that is to be expected. Much of the growth in China’s portfolio, and indeed much of the overall growth in central banks Treasury holdings, over the past year has reflected a shift out of risk assets. Central bank purchases of Treasuries have actually been running far above total global reserve growth for the last couple of quarters. That cannot last forever. 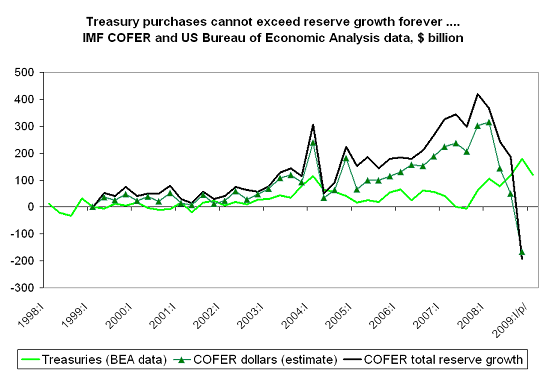 Some reduction in the pace of inflows into the Treasury market was always to be expected if reserve growth didn’t pick back up.

But the data on reserve growth in the chart is also a bit out of data, as the IMF has yet to release data for q1 -- and the end of q2 is now drawing near. Reserve growth likely remained weak in q1 09, but seems to have picked up in q2. That could support a more sustainable inflow into the Treasury market --

At least if major governments remain adverse to credit and equity market risk. That though may also be changing. At least the China Investment Corporation is once again taking risks. Lou ji-Wei is apparently worried about missing ’opportunities near the bottom of the market."

The CIC was actually quite conservative in 2008, no doubt in reaction to its losses on its high profile 2007 investments. SAFE took on far more risk. Now it seems that roles may have reversed once again. The overarching reality about China is that it now has so much money that it can now do a little bit (or even a lot) of almost everything.

* The US only tracks the initial sale of a bond to an investor abroad. Subsequent sales never into the TIC data, though they are often picked up in the annual survey.