The official sector – at least the IMF – thinks the world has started to rebalance, and the US external deficit is safely heading down.    Stephen Jen agrees, strongly.   He recently declared himself a “Global Re-Balancing Optimist.”

I see the case.  A weak(er) dollar should boost US exports.   Appreciating homes can no longer substitute for savings, or provide as good an asset to borrow against.   That should prompt Americans to scale back consumption, and start to save more out of their current income.   Slower consumption growth means slower import growth.   Higher savings would reduce the savings and investment gap.

Sounds good.    But three reasons keep me among the pessimists.

First, I don’t yet see strong evidence that the trade deficit is set to fall.  Q1 wasn’t exactly encouraging.   Exports should bounce back – strong global growth and the dollar’s weakness against the euro and the Canadian dollar is hard to square with no export growth, even if China seems to be benefiting far more than the US from dollar (read RMB) weakness.  But if consumption growth stays strong -- as Jim Hamilton notes "Whatever problems the economy had in the first quarter, they weren't a lack of consumer spending" -- non-oil imports should also grow.

The stabilization of the United States non-oil trade balance in 2006 hinged on two things – an acceleration in export growth and a slowdown in import growth, particularly imports from Canada and Europe.   If the US pulls out of its growth slump on the back of consumption growth, the second pillar of the adjustment will dissipate.

I can make the same argument from a savings and investment point of view as well: Consumption growth was far faster than income growth in q1.   That means less savings – and a wider current account deficit in the absence of a fall in investment.

Second, oil is no longer falling.  The US petroleum trade deficit is still big – even if it isn’t quite as big as it was in the summer of 2006.  It will rise a bit from its q1 levels in q2.   And on current trends, it doesn’t look likely to fall much over the course of the year.

Combine those two facts, and my current baseline forecast has the trade deficit staying roughly constant in nominal terms and falling a bit as a share of GDP.    The forecast assumes a major pick-up in export growth relative to q1, so you can argue it is optimistic.  On the other hand, global conditions should support export growth.

Third, I think the income balance is poised to deteriorate significantly.   That is the real source of my pessimism.     The market no longer expects the Fed to ease by much.   Short-term rates will stay around 5%.  And long-rates have moved close to 5%.     That suggests to me that the interest bill on the United States external debt is set to rise: the US will be taking on new debt at 5% plus to cover its deficit, as well as rolling over an awful lot of old debt at higher prices. 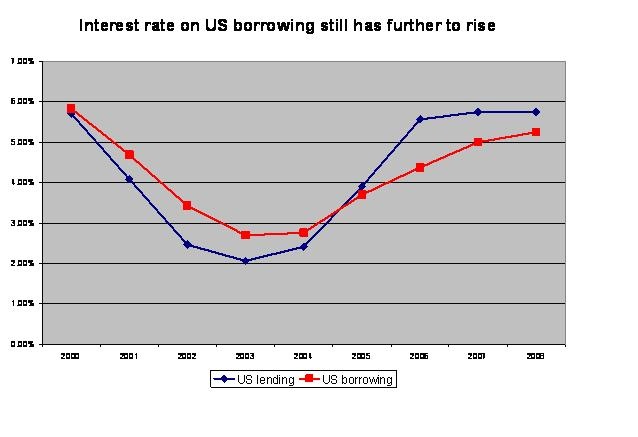 And if you combine a 5% rate on close to a trillion in new debt with a significant rise in the average interest rate on your existing debt, well, things get a bit ugly. 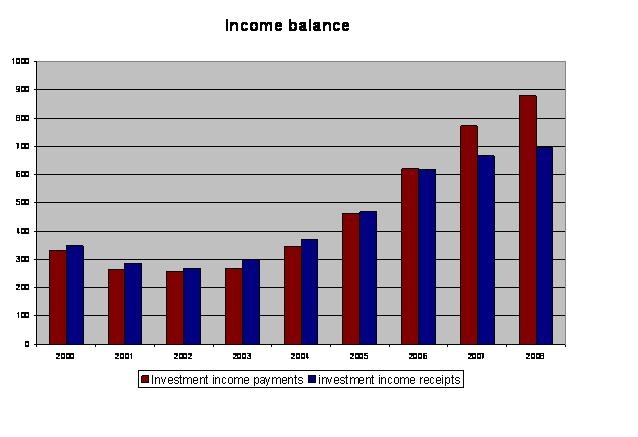 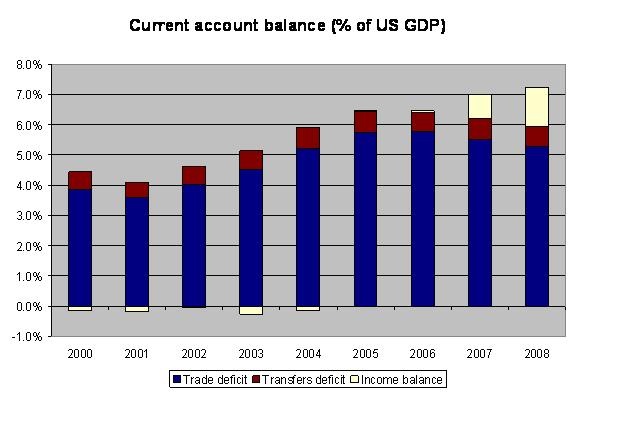 So if you want a potential surprise for later in the year – a reversal in the improvement in the US current account deficit in late 2006 would be mine.   If real consumption growth stays at 4%, pulling the US out of its growth slump I don’t quite see how the trade deficit falls by much.  And I am reasonably confident that the US will start making significant net interest payments on its debt in 2007.

Can a fall in central bank demand explain the recent rise in Treasury rates?