In today’s monthly Oil Market Report (OMR), the International Energy Agency (IEA) weighed in on how it sees the recent hostilities and pipeline tariff deal between Sudan and South Sudan affecting oil production there through 2013. This is hardly an academic question. The loss of South Sudan’s oil has been one force putting upward pressure on global prices this year, and oil is critical to the economy and stability of both countries.  The IEA’s bottom line? Don’t hold your breath for things to get much better, at least in terms of oil production, despite last weekend’s encouraging developments. And plenty can still go wrong.

Last Saturday, the two countries reached an interim deal on the contentious issue of how much South Sudan (the site of three-quarters of the pair’s oil production) would pay Sudan (which controls the pipelines that export its neighbor’s oil) in pipeline transit fees. Coming to an agreement over how to split their oil revenues has been extraordinarily difficult for both sides, and understandably so, dependent as they both are on that source of wealth. The transit fees are part of a broader dispute, which also includes “a security deal over borderlands, disputed territories and proxy militias,” that was severe enough to shut down South Sudanese oil production altogether in January.

When the deal was stuck last week, some sources rejoiced that the flow of oil would be restored again “in a matter of weeks.” Apparently the IEA does not share that optimism.

The IEA argues that “news of the deal does not, however, dramatically change our view on production prospects” over this or next year. “Restarting crude production will not be easy.” Instead of the roughly 450 thousand barrels per day (kb/d) the two countries collectively produced in 2011 (see Figure 1), the IEA sees no more than one-third of that rate being achieved in 2013. What’s more, it foresees oil production from both countries averaging just 60 kb/d over the upcoming quarter—a paltry 13 percent of year-ago levels. 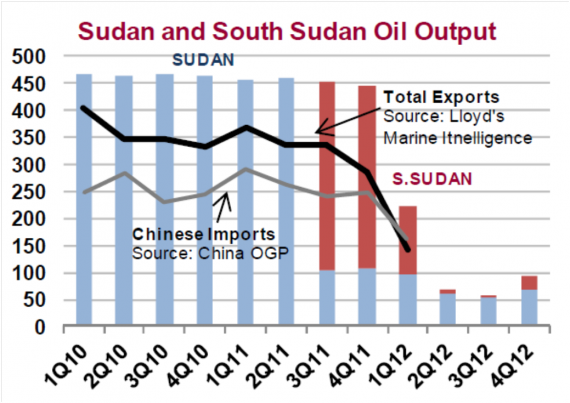 The IEA goes on: “Industry sources have been quoted as saying that restarting oil production could take six months or even longer, since the lines have been filled with water and because some wells were not closed properly.” And it emphasizes that “contentious issues remain”:

“Sudan stresses that the implementation of the transit agreement will not go into effect until the sides agree on border security and the status of the Abyei area. Talks have broken down several times in the past over the location of a demilitarised zone, which would represent the first step to ending hostilities. The sides are unlikely to continue the requisite negotiations on border security until after Ramadan, at the end of August. According to the African Union Peace and Security Council (AUPSC), the parties have until 22 September to resolve the remaining issues.”

Given the stakes involved, it’s an issue worth keeping an eye on as events unfold.