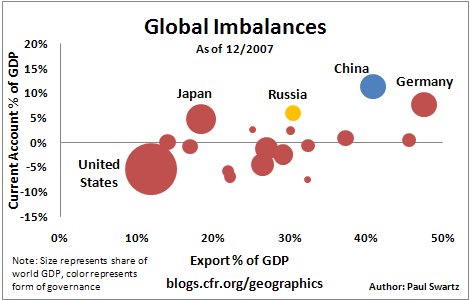 The early 1990s witnessed trade tensions between the United States and Japan, even though the U.S. current account deficit stood at about 1% of GDP and Japan is a democracy.  As our chart shows, the world is now trying to manage much larger imbalances, and two of the major surplus countries are not democracies.  Resolving these imbalances may be more difficult because of the dependence on exports in China and Germany, the two leading surplus economies.

Wolf: It is in Beijing’s Interest to Lend Geithner a Hand