I would caution against reading too much into the fall in the dollar's share of global reserves in the latest IMF COFER data release for two reasons:

Second, the diversification that is taking place is coming from the world's advanced economies, not the world's emerging economies.   After stripping out valuation gains, the advanced economies added $10.7b euros to their stockpile -- a far larger sum than the $3.1 billion increase in their dollar holdings.  Either Japan diversified at the margin or a host of European countries continued to shift away from dollars.   Those emerging economies that report data to the IMF, by contrast, bought three times as many dollars ($61.4b) as euros ($21.2b).

If emerging economies that do not report detailed data on the currency composition of their reserves acted like other emerging economies, dollar reserve growth remained very strong -- though not quite as strong as in q1 or q2.    Central bank financing of the US hasn't ended.  (UPDATE: supporting data has been added below)

Consequently, to me the big story remains the ongoing increase in overall reserve holdings.   Valuation gains explain a big chunk -- probably around $100b, but I need a bit more time to do the analysis (update: valuation changes look to have added more like $80b)-- of the $317b headline increase in q3.   But around two thirds of the increase comes from ongoing intervention in the foreign exchange market.  Valuation gains also explain a portion of the $1287.2b increase in global reserves over the last four quarters.   But the core story remains the enormous -- indeed, unprecedented -- overall growth in global reserves and the enormous growth in central bank holdings of dollars.

If 75% of that increase was held in dollars and 25% in euros (a breakdown that resembles the breakdown from those countries that do report), countries that do not report added $83.4b to their dollar holdings.    That would bring the global total up to around $150b in q3.

And that total doesn't include the increase in the non-reserve foreign assets of the Saudi Monetary Authority, the CIC, other sovereign funds or the large increase in the dollar holdings of Chinese banks (remember, Chinese reserve growth was unusually low in q3).

UPDATE: Nothing like a lengthy weather-related delay to provide time for a bit of number crunching.    Best that I can tell, funds shifted to the Chinese banks and Saudi non-reserve foreign assets added about $37b to the global total for q3 (The Saudi adjustment is straightforward, the Chinese adjustment hinges on the considated foreign exchange balance sheet of the Chinese banking system), bringing headline reserve growth up to around $354b in q3.

Valuation changes explain about $80b of the overall increase.   Total valuation adjusted reserve growth was in the $275b range.   The size of the euro's move in q3 though means that this estimate is depends more than usual on getting the estimated euro holdings of countries that do not report data to the IMF (notably China and Saudi Arabia right).

Christian and I have stress-tested our estimate of the currency composition of countries that do not report in a lot of different ways.  It is reasonably robust -- at least so long as my estimates for the dollar share of China's portfolio are robust.    But with so much of the estimated increase in dollar holdings coming from countries that do not report detailed data to the IMF, there is a higher than usual margin of error.

Taking a slightly longer perspective, over the last four quarters, the "headline" increase in global reserves -- counting reserves managed by Chinese state banks and the non-reserve assets of the Saudi Monetary Authority but not the growth of the assets managed by the Gulf sovereign wealth funds, Norway's government fund, Singapore's GIC and Temasek and the CIC -- over the last four quarters was $1394b.  The valuation-adjusted increase was only $1212b, with an estimated $182b of the increase coming from valuation changes.

These are absolutely huge numbers.  If they are right - and the main source of potential error would be a higher than estimated euro share in China and Saudi Arabia, and thus larger valuation gains -- total "official asset" growth, counting oil revenue transfered to sovereign wealth funds, is in the $1.3 trillion range.   Trillion. 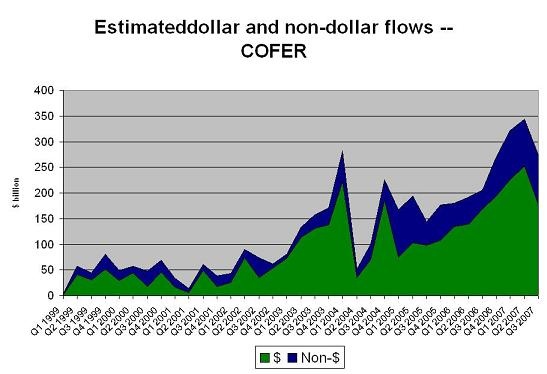 The next chart shows the rolling four quarter sum for total reserve growth, the US current account deficit and my estimate of dollar reserve growth. 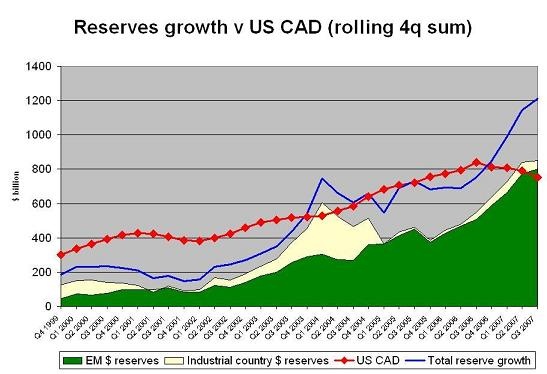 It sure doesn't seem like dollar reserve growth has stopped to me -- on a rolling four quarter basis, it never has been higher.

That is why I am not a fan of the current convention of looking at the dollar's share of reported reserves in the COFER data to assess whether the dollar is losing its status as a reserve currency.

Right now, the small fall in the dollar's global share -- a fall that is most likely due to a small shift in the portfolios of some European central banks along with moves in the euro/ dollar, not from a major shift in the activity of reporting emerging economies -- isn't the real story.  The real story is the huge growth in central bank reserves, euros and dollars alike, over the past year.