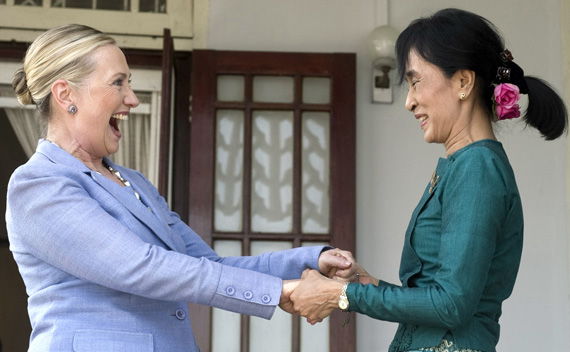 In my new CFR Policy Innovation Memorandum, I outline a strategy for U.S. policy called conditional normalization, in which Washington would significantly boost its relationship with Myanmar provided the reforms in that country continue apace. This proposal is significantly farther than the Obama administration is willing to go at this point. On her trip to Myanmar, Hillary Clinton offered the Burmese government a few small carrots: The U.S. will allow Myanmar to join the Lower Mekong Initiative, which is a forum including Laos, Cambodia, Vietnam, Thailand, and the United States designed to discuss water issues and cooperation along the Mekong.  According to the Los Angeles Times, Clinton also “proposed that the United States and Myanmar work jointly to recover the remains of 600 U.S. soldiers who died in the country during World War II.” In addition, the United States will now no longer block potential IMF and World Bank aid efforts in Myanmar.

Although these are small steps, the administration should build on the Clinton visit by taking the following measures in the near term:

As in Myanmar, Coups are Becoming More Successful, and More Sophisticated