Skip to main content
As India “Looks East,” a Little Problem of Economics 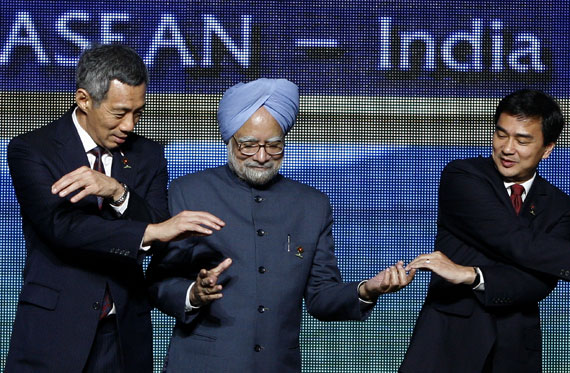 What’s the warning?  Put bluntly, it is that economics, not security, still defines the essential strategic reality of Asia today:  China is fast becoming the central player in a new economic regionalism.  The U.S. and India are each enhancing their political and security profiles—albeit for different reasons and in different ways.  Yet both risk being left out as Asian economic integration tightens.

I’ve written a lot about this in the U.S. case, including on this blog.

The U.S. has endured decades of loose talk about American “decline” in Asia.  But in the months since North Korea torpedoed a South Korean naval corvette in March, America’s security role has been strongly reinforced.  Yet ironically, that’s part of the problem:  Even as America’s security role remains the backbone of strategic stability, the economic pillars of U.S. credibility are eroding across Asia.  For one piece of that argument, see, for example, my blog here on U.S. trade policy.

As I wrote in this week’s Business Standard, this should offer a bit of a cautionary tale to India:

Strategically, India has been bottled up in the subcontinent for generations, but it wasn’t always so:  Southeast Asia bears the hallmarks of a bygone era in names like "Indonesia" and "Indochina,” and Indian sailors once plied the trade routes from the Indian Ocean to the strait of Malacca.

But as it again “looks East,” India risks being left out in Asia because of the significant mismatch between its lofty strategic goals and more earthbound economic realities.

Make no mistake, India’s strategic connections to East Asia are being restored.  Yet this is happening, in large part, because India is widely viewed as a potential—if still very modest—counterbalance to Chinese power.   And diplomacy and politics remain the central drivers, not least, for example, in the invitation to India to become a more active player in East Asian regional groups.

But, at the end of the day, strategic intentions alone cannot sustain a larger role for India in Asia writ large.  As America is rediscovering, economic content is essential.  Greater economic content to India’s relations with East Asia will be required.  And investment-related reforms will surely be essential, too, to enhance the flow of goods, capital, and opportunity.

Trade plays a growing role in the Indian economy, and India has signed preferential trade agreements with ASEAN and South Korea.  Yet scale remains a handicap:  11.6 percent of ASEAN’s trade is with China, just 2.5 percent with India.  Meanwhile, the backbone of East Asian economies remains integrated supply and production chains to which India is largely irrelevant.

More manufacturing in India’s southern states could mean greater integration into East Asian supply and production chains, or not.  Likewise with outbound investment from corporate India:  it could, perhaps, transform India’s interactions with Southeast Asia; but, here too, scale remains a handicap.

The business of Asia is still business.  And India and East Asia have some distance yet to travel.

Avoiding a Tempest in the South China Sea