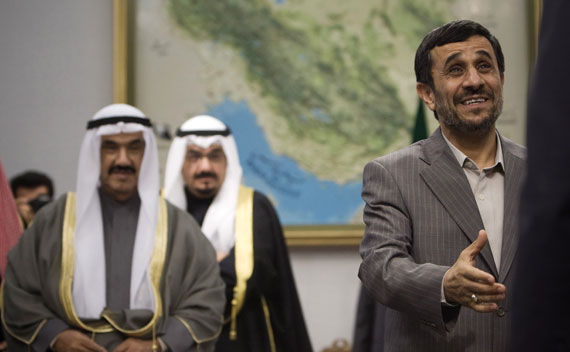 It is fair to say that Baghdad and Tehran combine to make for a certain amount of national neuroses in Kuwait.  So it is fortuitous that I am in Kuwait as the last American combat forces depart Iraq and the “coming confrontation with Iran” discussion is heating up in Washington, Jerusalem, and no doubt capitals throughout the Middle East.  The fact that Kuwaitis are worried about both countries is not news.  The Kuwaitis remain concerned—as they should be—that post-Saddam Iraq may yet pose a threat to their security.  According to Kuwaitis, there are enough Iraqis who believe that Kuwait is, indeed, the 19th province of Iraq to produce anxiety about what a Baghdad without the restraining power of American forces might do.

On Iran, there is concern, but it is of an entirely different sort than the debate—if you can call it that—going on in Washington.  Of course, the Kuwaitis don’t want Iran to develop nuclear technology, but their concern is deeper and poses a more difficult policy dilemma for them and their allies, primarily the United States.  From Kuwait City, the Iranian drive to develop nuclear technology is not a function of crazed mullahs hell-bent on dropping the big one on Tel Aviv.  Rather, it is the result of Iranians’ belief in their own exceptionalism, which drives an expansionary foreign policy in Tehran’s quest to influence the region.  In other words, from the perspective of Kuwaitis, the clerical regime in Iran—bad though it may be—is not the problem; Iran is the problem.  In other words, it does not matter who is in charge in Iran and what their particular worldview happens to be, as long as Tehran isn’t the regional hegemon, it will not be satisfied with the status quo in the Gulf and beyond.

It strikes me that this analysis, which is entirely plausible given what we know about Tehran’s foreign policy under the Shah, throws into question the underlying logic of regime change in Iran.  There may be good reason why the clerical regime is a threat to regional peace and stability, but even if the regime is “replaced” (I think that is the new term of art) and there is a change in Iran’s approach to the region, that shift may only be temporary.  If that is the case, then regime replacement seems to be a pretty bad course—a waste of resources and lives.  Still, that insight neither resolves the problem that Iran continues to present nor restrains the Israelis who have a far more acute sense of the Iranian threat than Americans and Kuwaitis.

So what is the answer?  The Kuwaitis will tell you it isn’t war.  Other than a few diehards left in Washington it is unlikely that the United States will try its hand at engagement again.  What was wrong with containment? Somewhere along the line it was declared dead. Yet containing Iran (and Iraq) was relatively cheap and it largely worked.  The Iranians were unable to alter the regional order in its favor.  This failure is, no doubt, the reason why the Iranians are developing a nuclear capacity.   Why can’t the United States and its allies contain a nuclear Iran? Didn’t Washington contain a nuclear capable Moscow? To be sure, some will say that it is because Iranian leaders have a worldview that makes them uncontainable—i.e. that they are irrational.  I don’t buy it.  I think they are bad people, but I don’t think they are undeterrable and uncontainable.  This isn’t a popular position to take in Washington these days, but ask the Kuwaitis.  They don’t want to live with the consequences of yet another war on their doorstep.  They’d prefer to marshal the resources of the region and the United States to keep the Iranians in the proverbial box.  I am with them.