It is hard to focus on a routine, backward looking data release amid the most profound financial crisis the US has experienced in a long-time -- a crisis that in its own way will likely rank among the most significant events of recent history. I am not sure if the (apparent) fall of Wall Street ranks up there with the fall of the Berlin Wall, but it does feel like an era has passed.

Questions are beginning to be raised about the United States’ ability to finance itself. Moreover, the questions are being framed appropriately: rather than focusing on whether private investors want US assets, folks are debating whether China will still want US assets. And looking back is probably as good a way as any to begin to answer those questions.

However, reading the capital account data takes a bit of skill -- or at least knowledge of how the data is likely to be revised over time. One example should suffice: back in early 2007 (before the data from the June 2006 survey or the June 2007 survey had been released and incorporated into the data), the US estimated that official creditors -- sovereign funds as well as central banks -- had provided the US with about $300b in financing in 2006. That implied the majority of the current account deficit* had been financed by private inflows. The most recent data release -- which reflects the information about flows in the first half of 2006 from the 2006 survey and the information about flows in the second half of 2007 from the 2007 survey -- indicates that the official sector provided about $500b in financing to the US back in 2006. 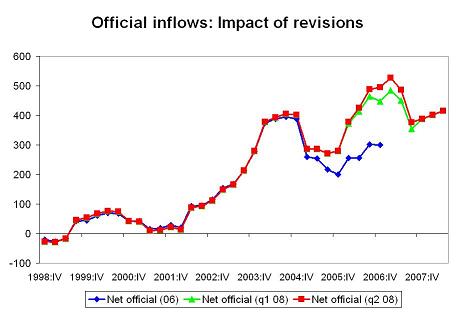 The scale of these revisions raises questions about a lot analysis that suggested that official inflows weren’t a major reason why Treasury yields remained low in 2005 and 2006. That analysis was based on the observation that yields didn’t rise after official flows - as reported in the TIC data -- fell. Alas, it turns out that official flows didn’t actually fall. The TIC data just didn’t capture most of the flow -- as China and the Gulf tend to buy through London. After the survey revisions, the US now thinks official flows for 2006 topped official flows in 2004.

What of the last four quarters? The US data indicates that official creditors provided the US with about $400b in financing -- less than in 2006. It also indicates that "private" investors abroad bought about $250b of Treasury bonds (including short-term bills). If you believe that private investors abroad bought that many Treasuries, I have a lot of formerly triple AAA CDOs stuffed with subprime debt that I want to sell you at par.

The US Treasury made the direction of the likely revisions to the data totally clear in the last survey. It noted that the survey indicated that ALL of the increase in foreign holdings of Treasuries and most of the increase in foreign holdings of Agencies between June 2006 and June 2007 had come from the official sector (see p. 16 of the .pdf/ p. 14 of the udnerlying document). There isn’t good reason to think this has changed dramatically. If I add "private" purchases of Treasuries to the official flow data, the total is roughly equal to the current account deficit. 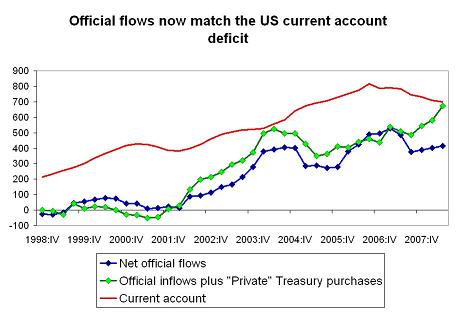 Combining private purchases of Treasuries with recorded official inflows offers a more accurate guide to what really has been going on (in my view) than the reported data. UK purchases of Treasuries and Agencies over the past years have consistently been a reflection of official demand. And remember that even the revised US data understates the real impact of central banks and sovereign funds on the global flow of funds, as it doesn’t pick up the (growing) share of central bank and sovereign fund money that is managed by private fund managers.

The US data tells another story: private foreign demand for US bonds -- setting Treasuries aside -- has collapsed. That sounds a bit over-dramatic, but it is an accurate reflection of the data. 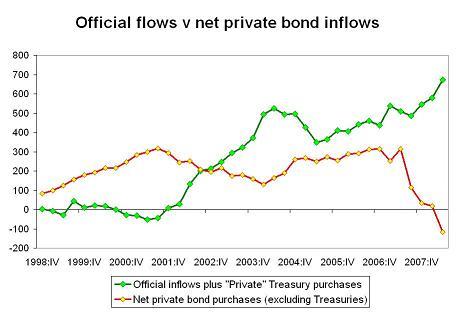 Indeed, the collapse in all cross-border flows has been dramatic.

One the arguments about the data a few years backed focused on the difference between gross and net flows. Analysts who downplayed the impact of official flows would note that official flows were relatively small compared to gross private flows; analysts who highlighted official flows by contrast tended to argue that a lot of private flows offset and that net flows provided a better guide to who in the system was willing to take on the risk of holding dollars and financing the US at low rates.

That debate is now, in some sense, moot. While official flows have increased (once appropriate adjustments are made), gross private flows have absolutely collapsed. Inflows as well as outflows. 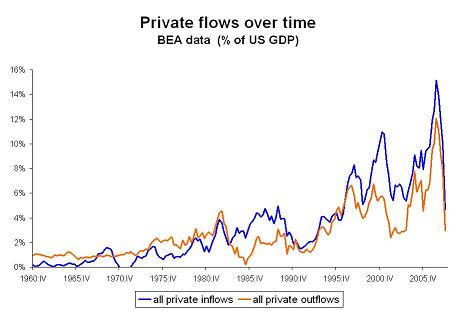 The reflects the collapse of the "shadow" banking system and the associated offshore intermediation. I suspect that when analysts look back at a lot of the data from the 2004 to mid-2007, they will conclude that a lot of the apparent rise in "financial globalization" turned out to be a chimera.

I also like to look at the rawest of raw data -- the data showing the quarterly US deficit (unadjusted) relative to various quarterly flows. 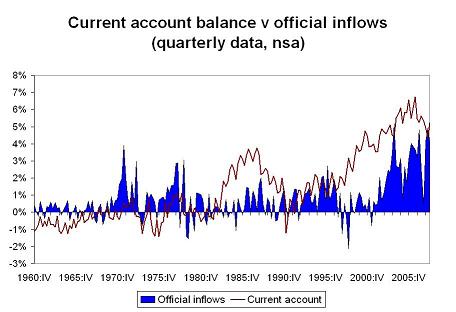 In the past few quarters, net official flows (even in the unrevised data) have basically matched the US deficit. Q3 2008 is the exception, and there is good reason to think that the deleveraging associated with the onset of the "subprime crisis" influenced the data. The fall off in recorded inflows to the US in q3 of last year is far larger than can be explained by the (more modest) fall in global reserve growth in that quarter. The IMF COFER data -- while incomplete -- also doesn’t suggest a shift out of dollar reserves in that quarter. There was a $70b increase in reported dollar holdings, and some fraction of the $150b increase in the reserves of countries that do not report data to the IMF also went into dollars -- as did some fraction of the increase in the dollar holdings of China’s state banks and the Saudi Monetary Agency.

That chart also highlighted one other point: The past few years look -- visually -- a lot more like the 70s than the 60s. The 60s were the the heyday of the initial Bretton Woods system. But they were also marked by fairly modest official inflows into the US -- and those inflows financed private capital outflows now a large deficit. The really big inflows didn’t come until the Bretton Woods system started to break down in the 70s. And, well, the recent scale of official flows makes the official flows of the 1970s look, at least in some ways, kind of tame.

* Ted Truman of the Peterson Institute likes to note, correctly, that official inflows finance both private outflows and the current account deficit, and it is impossible analytically to say official flows finance one rather than the other. That is absolutely the case -- though I would argue that short-term flows generally should be netted out of the capital flows data as most of these flows seem to be between New York and London and similar financial centers and they generally seem to offset. However, when I compare official inflows to the current account, I am using a bit of short-hand. That said, I do think that the gap between net private inflows and the current account deficit is a relevant indicator.

It seems like so long ago ... documenting the role foreign central banks played in the US decision to backstop the Agencies