The Saudis just released data showing just how much foreign exchange they added to their stockpile in 2007. Jim Hamilton (cool photos) reports that the Saudis now seem to be working a bit harder than in the past to get the same amount of oil out of their biggest -- actually the world’s biggest, by a substantial margin -- oil field.  But they certainly aren’t short on cash. The foreign accounts of the Saudi Arabian Monetary Agency (SAMA) swelled by over $75b this year. If oil stays at $90, only the creation of a Saudi SWF will keep the 2008 total under $100b.

SAMA’s foreign assets were up $16b in December, and $42.6b (valuation adjusted) in the fourth quarter.

With Rachel Ziemba of RGE, I am trying to better understand how the Gulf -- which invests buys equities as well as bonds -- is managing its money. Our latest effort -- which builds on our past work-- is only just starting.  But here is a graph showing the foreign equities the Saudis would have needed to buy if wanted to maintain a 20% equity share of SAMA’s reported securities portfolio. 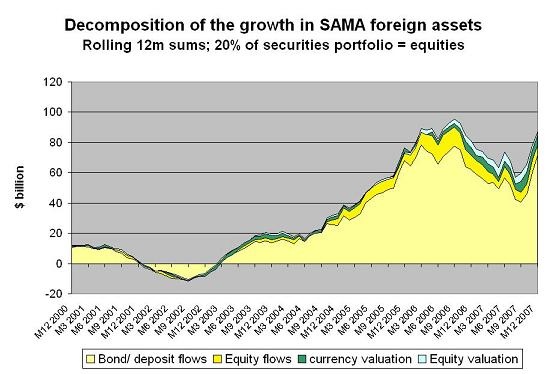 A couple of things stand out in the graph.

The first is that the Saudis never would have needed to spend more than $15 over a 12 month period to keep a constant 20% equity share in their portfolio. Of course, if the Saudis were increasing the equity share of their portfolio rather than holding it constant they would have had to buy more, but the lion’s share of their swelling coffer was still being invested in bonds.

If the Saudis-- and indeed other central banks that have been buying a lot more bonds than equities -- shift course and start putting say 80% of their funds in equities and 20% in bonds, it would be a big shift. Ask the investment banks. They are hoping the sale of (over-priced?) US equities to sovereign funds replaces the sale of (over-priced) bonds to central banks as a key source of financing for the US current account deficit.

The second is that from q3 2006 to q3 2007 Saudi foreign asset growth -- on a rolling 12m basis -- was falling. Why? It wasn’t because the average price of oil was falling. It was actually remarkably stable at around $60 a barrel (the 12m average that is) over that period. Rather, I suspect domestic spending and investment rose, reducing the funds the Saudis had left over to place with SAMA. The burst in spending explains why inflation started to pick up in 2007 -- though the falling dollar clearly didn’t help.

The recent uptick in oil prices has, though, has led SAMA’s foreign asset growth to shoot up again. The pattern here is quite clear. A shock to oil revenues is followed by a rise in spending, but with a lag.

Even so, the Saudis are unlikely to add as much to SAMA’s foreign assets as Norway will add to its government fund. 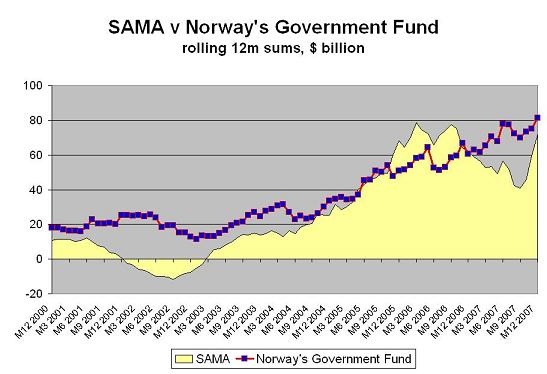 Both Saudi and Norwegian foreign asset growth is tied to moves in the price of oil, as one would expect.   But Norway has -- apart from a brief period in late 2005 and most of 2006 -- added more to its government fund than the Saudis have set aside at their central bank even though it produces and exports significantly less oil than the Saudis. Norway’s oil also costs more to produce than Saudi oil.

So what explains the difference?

First, Norway collects taxes, and generally finances its government with tax revenue not oil revenue. That means that almost all the surplus oil revenue goes to the government fund and is used to build up Norway’s financial portfolio. The government can spend -- in theory at least -- only the interest income from its financial portfolio, not the current oil revenue. That effectively converts a variable oil revenue stream in a theoretically more stable financial revenue stream. The Saudis by contrast don’t collect taxes and rely on oil revenues to fund their government budget. Higher spending (and more government-led investment) consequently means less for SAMA. Institutions -- including fiscal institutions -- matter. Norway exports fewer barrels of oil, but saves more of the revenue from each barrel of exported oil.

Second, the Saudis have -- to use a wonderful phrase -- gone further in "privatizing" the management of their oil windfall than the other Gulf states. The increase in SAMA’s foreign assets has generally lagged Saudi Arabia’s current account surplus. That implies that a range of "private" Saudi investors -- including, one would assume, members of the royal family -- have also been building up their foreign assets.

I would guess that those private accounts have been invested more aggressively that SAMA’s public accounts.