If oil stays at $140, the Gulf -- based on projections that imply GCC spending and investment will rise so that the GCC needs $55 to $60 oil to cover its import bill -- the big GCC funds and central banks should add close to $400 billion to their foreign assets in 2008. 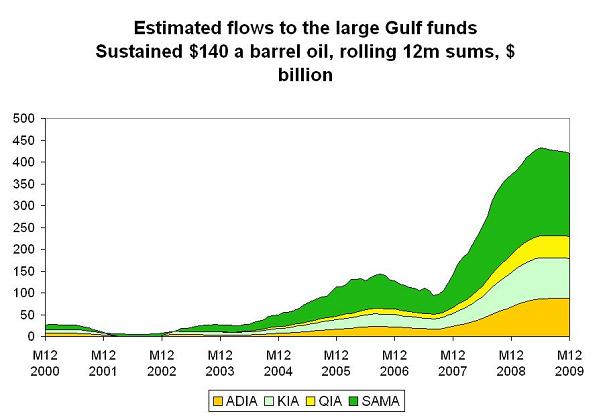 It is also a reminder that the institutions that manage the Gulf’s foreign assets will do more than determine the size of some investment bankers’ bonuses. They increasingly will shape global capital flows.

The graph showing the estimated overall increase in the GCC’s assets also shows the estimated inflows into individual funds. That is my little contribution to increasing global transparency.

Each of the big Gulf funds is worth getting to know a little bit better.

SAMA is the Saudi Arabian Monetary Agency. It now has around $365 billion in foreign assets -- and manages additional funds for the Saudi pension system. Its asset allocation isn’t disclosed, but it is likely to be the most conservative of the big Gulf funds.

ADIA is the Abu Dhabi Investment Authority. It has a revamped, but still not very informative website. SAMA isn’t as slick, but it releases more data - and the Saudis aren’t known for their transparency. Business Week’s profile of ADIA has far more information than the web site). That said, we now pretty much know that ADIA doesn’t have as much money as some investment banks are claiming. The IMF’s Moshin Khan has said as much. So has Abu Dhabi’s emir-- Sheik Khalifa. He is among the few who certainly knows ADIA’s true size. Unless someone has better information (or believes that Sheik Khalifa is understating ADIA’s size), I would argue that journalists should stop using $825 billion as an estimate for ADIA’s size -- let alone the $1.25 trillion estimate sometimes thrown around. It is very big -- especially given Abu Dhabi’s small population -- but not quite that big. There is a risk that the Setser/ Ziemba estimate ($650b at the end of 2007) may be a bit on the high side. $250 billion was bandied about a little less than two years ago.

QIA is the any website">Qatar Investment Authority. It isn’t a beacon of transparency. Don’t look for a website. But as a result of the QIA’s stake in Barclays, we now know that the QIA’s chairman (and Qatar’s Prime Minister) , Sheik Hamad, often invests alongside the QIA for his personal account. Sheik Hamad’s fund -- Challenger -- is putting $1 billion into Barclay’s; QIA is putting in a bit more -- up to $3.4 billion. Sheik Hamad’s co-investment is consistent with a lot of the informal "color" about the Gulf. The dividing line between a sovereign wealth fund and the sovereign’s personal wealth sometimes isn’t completely clear.

KIA is the Kuwait Investment Authority. It also has revamped its website -- and it provides a bit more information than ADIA. Like ADIA, it doesn’t disclose data on its size on its website. Unlike ADIA, it reports that data to Kuwait’s Parliament. We know it had $264.4 billion at the end of March 2008. That is somewhat less than SAMA’s foreign assets.

Sum it all up though and it is clear that the Gulf had a lot of money even before oil rose to $140 billion. The graph above just shows the estimated inflow into the Gulf funds from surplus oil revenues. It doesn’t include the returns on the Gulf’s existing portfolio.

Such returns aren’t going to be very impressive this year.

But it doesn’t really matter. Not if oil stays this high.

Qatar, which has close to a million inhabitants, had a per capita GDP of around $80,000 in 2007, when oil was about 1/2 its current level. That calculation includes Qatar’s guest workers. But the oil revenue goes to Qatar’s native inhabitants, who number less than 200,000. The per capita income for native born Qataris could be north of $300,000 a year.

Qatar has more oil (and gas) relative to its population than most. But the other Gulf states aren’t doing badly.

Oil, it seems, isn’t much of a curse if the price is high enough.

Does the Fed’s mandate now extend to Beijing, Moscow and Riyahd?