OK, I probably should strike “world” and insert “the world’s governments” instead.  It is pretty clear that central banks and oil investment funds provided the bulk of the financing the US needed in 2006 (see Table 1.2 on pp. 8-9 of Chapter One of the WEO).

However, at least one important government doesn’t think that it makes sense to add to its existing dollar holdings.  Xia Bin (an economist with China's Development Research Center), a few days ago:

'Everyone knows that they should try to cut their US dollar assets. But, of course, if China wanted to make such a move, a big cut, our losses would be large as well. That would be very difficult to do,' he said

True.  But adding to your reserves doesn’t reduce the ultimate loss.  It defers the realization of the loss, but it also increases the size of the ultimate loss.   But the key point Xia Bin raises is the first sentence – the idea that “everyone” knows that they want to hold fewer, not more, dollars.

Bin's statement is also hard to square with the fact that China's reserves increased by $135.7b in the first quarter alone.   Only about $5b of that likely came from the rising dollar value of China's existing euros and pounds.   A a $130b quarterly increase (ona  flow basis) is a $520b annual pace of increase -- a truly stunning sum.    China almost certainly added about $100b, if not more, to its dollar holdings in the first quarter alone.

Two trends seem to be to be in tension.

Trend one: The world’s key central banks have concluded that they have more reserves than they need, and are rapidly losing interest in adding to their dollar reserves.    China’s central bank has made it known that it thinks it has enough reserves.  Some in China think the PBoC already has far more reserves than it needs. Korea’s central bank has indicated -- at various points in time -- that it has more than enough salted away.  The ADB agrees.   So does the World Bank, the IMF, and for that matter, the US Treasury.   With good reason.    Read Olivier Jeanne and Romain Rancierre.

The argument that Asia is building up reserves as insurance against crises no longer holds water.  The Asian central bankers themselves recognize they don’t need more reserves for prudential reasons.   Their external balance sheets are rock solid.  The domestic economic and financial risks that they worry about are augmented by continued reserve growth.

Trend two:  A slowing US economy may well need to rely more – not less – on central banks to finance its deficit.   The available data suggests that private investors are willing to finance a US current account deficit of $400-500 billion when times are good and US financial assets offer a bit of a yield pickup (and, for that matter, when the US offers a tax break that encourages US firms to bring their foreign assets home).

In 2006, net private flows were more like $200-250b by my calculations -- which infers net private flows from the gap between the US current account deficit and estimated official asset growth rather than relying on the US data.   The net point is important -- private actors bought a lot of US corporate bonds, but US investors also bought a lot of foreign securities.   Moreover, I am effectively assuming some private purchases of US debt were indirectly financed by the growing offshore dollar deposits of the world's central banks -- the accounting can get a bit messy.

However, if US should ever start to cut rates -- and that seems a bit less likely now than a few weeks ago -- and the dollar lose its "carry" over the other big currencies, net private inflows might well fall.   Back in 2003 and 2004 they fell to $100b or so by some measures.

Yet even a slowing US economy leads the US trade deficit starts to trend down, I suspect the US will need to borrow about $900, maybe a bit more, to cover its ongoing trade deficit and a rising income deficit.     That works out to an “official” financing need of up to $800b in a really bad case scenario.

Trend 1 and trend 2 conflict with each other.

So far, the tension hasn’t produced any policy changes.  All available data suggests that central banks – despite all the talk about tiring of dollars – actually increased their dollar reserve accumulation in the first quarter.   Look at the growth in the Fed's custodial holdings.

It takes a brave man (or woman) to forecast that this will change.

I rather clearly underestimated central bank’s willingness to finance the US back in early 2005.   While central banks took advantage of the dollar’s strength in early 2005 to scale back on the their dollar purchases, all the available data suggests that emerging market central banks dollar reserve growth increased substantially in 2006.   We know that emerging market central banks that report data to the IMF added about $230b to their dollar reserves in 2006, up from $130 in 05, $120 in 04, $95b in 03 and $35-40b back in 2002.

And the group that reports data to the IMF doesn’t include China or a lot of the oil exporters.    Add in an estimate of Chinese and Saudi flows (which could well be off … ) and total emerging market inflows to the US – proxied by the growth in dollar reserves -- have clearly remained on an upward trend (this chart comes from my recent paper with Christian Menegatti; RGE subscription required). 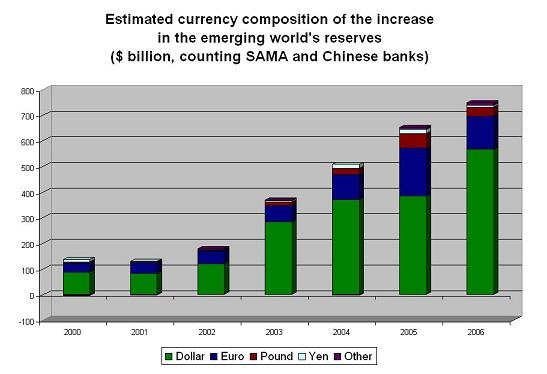 Actually, there is a third trend.  OK, this isn’t yet a trend.   It is more of a prediction.

Emerging markets increasingly will be financing not the expansion of the US trade deficit, but the expansion of the US income deficit.   If the average interest rate on US debt rises from 4.3% to 5.2% over the next two years and returns on FDI and US lending abroad remain unchanged, the total deterioration in the US income balance over the next two years will be close $200b.    The current account balance would consequently deteriorate by $200b even if the trade deficit stayed constant.

Exporters in emerging economies -- and real estate developers who have benefited from the rapid money and credit growth that has often accompanied rapid reserve growth -- have been the obvious "winners" from the current international monetary system.  They are a strong constituency that supports the status quo.  I have consistently underestimated the power of China's export lobby.   China too has its interest group politics.

Rather than financing export growth emerging market central banks (and the Japanese Finance Ministry) will increasingly be financing interest payments to themselves.   At the end of 2006, I estimate that the world’s central banks – counting SAMA’s foreign assets and China’s hidden reserves -- held around $3.7 trillion in dollar reserves.   On current trends, that easily could rise by another $1.3-1.4 trillion over the next two years.   if the average interest rate on their dollar holdings rises to around 5%, they will receive a bit under $200b in interest from the US in 2007 – and that total will rise to around $250b in 2009.

By 2009, counting all its foreign assets (not just its reserves) and counting euro and pounds as well as dollars, China should get close to $100b a year in interest payments.   By then its total foreign assets will top $2 trillion

I am starting to wonder what China’s exit strategy is.  On current trends, China will, after all, account for a very large of the growth in the world's dollar holdings over the next few years.

China is now as deeply entangled in the messy business of financing the US as the US is deeply entangled in the messy business of governing Iraq.   And as a share of China’s GDP, China is spending more subsidizing US consumption than the US is spending in Iraq.  The surplus in China’s basic balance (net FDI inflows + the current account surplus) is now close to 15% of China’s GDP (the IMF estimates China's 2007 current account surplus will top 10% of its GDP, and their estimate looks low to me, given the q1 data).   That finances the buildup of foreign assets by various parts of the Chinese state.   And if the expected  appreciation of the RMB against a dollar heavy basket of euros and dollars that replicates China’s reserve portfolio is about 33% (which seems reasonable), the expected capital loss on the incremental increase in China’s foreign assets – one measure of the implicit export subsidy – is around 5% of China’s GDP.

That is at least a rough estimate of the annual cost of China's current policy: a full accounting would look at the interest differentials, which right now offset some of these costs.

I think I know what the People’s Bank of China’s exit strategy is.   But a new People’s Investment Company just shifts the accumulation of dollars from one part of the Chinese government to another.   That doesn’t eliminate the loss, only shifts the loss to another part of the government.

Update: China's reserve rose by $135.7b in Q1, to $1.202 trillion.   Say $5b came from the rising dollar value of China's euros and pounds.  That leaves a $131b (roughly) increase.   The q1 trade surplus was $46.5b -- and the current account surplus is usually about $15b a quarter larger.  Call it $62 b.   That leaves a $69b gap between reserve growth and the current account -- which implies large capital inflows.  Say net FDI inflows were around $15b.  Then non-FDI inflows were around $54b.    Q4 reserve growth was lower than the estimated current account surplus plus estimated net FDI inflows.   So something changed.    Presumably the faster pace of RMB appreciation in q4 led folks to try to move into RMB, as expectations for RMB appreciation picked up (the stock market was also a draw).   But even so, the swing is huge -- I would guess that for some reason the PBoC stopped using swaps or doing other things to mask the pace of its reserve growth, so more of the growth in China's total foreign assets showed up on the central bank's balance sheet in q1.

That though raises another question -- why would the PBoC suddenly stop shifting some of the incoming dollars to the banking system?   It is a bit of a mystery.   The implied swing in non-FDI inflows between q4 and q1 is truely enormous.

Macroman has more as well.

You know, the weak RMB just might have something to do with the emergence of China&#8217;s big trade surplus &#8230;