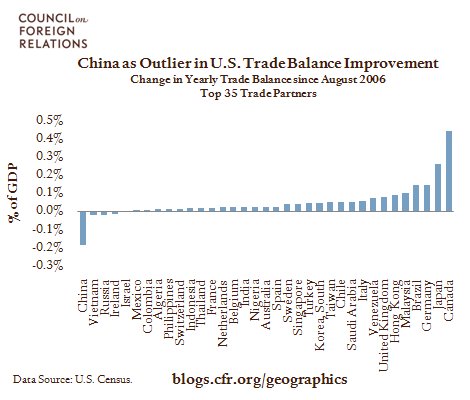 The yearly U.S. trade deficit peaked at 6.4% of GDP in August 2006. It improved significantly after the financial crisis, bottoming out at 3.6% in January 2010. This swing provided a boost to GDP and nudged the U.S. external balance toward a more sustainable level. The deficit then resumed an upward march, reaching 4.3% by November. A closer look at America’s bilateral trading relationships since the deficit high-point in 2006 reveals a significant improvement with many countries, and only a small deterioration with a few others. China – with which the U.S. has its largest deficit – is the conspicuous exception, as the figure shows. 2011 looks set to be a year of yet further-rising trade tensions between the two countries.

Beattie: Renminbi Issue Is Put on the Back Burner