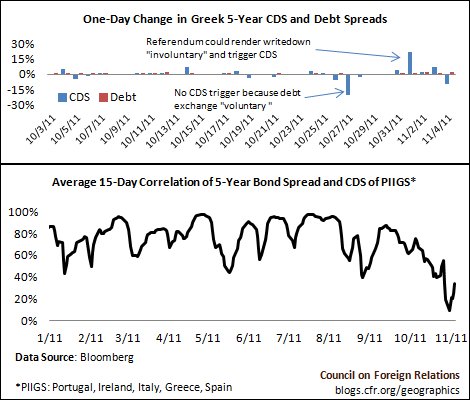 Imagine life insurance contracts that wouldn’t pay off if officials declared heart attacks to be “voluntary.” Welcome to the world of sovereign credit default swaps, or CDSs.  When the Greek debt deal was announced on October 27, the eurozone leadership insisted that the banks were taking a 50% write-down “voluntarily,” meaning that Greek CDS contracts would not be triggered.  This was done to protect official creditors like the ECB and IMF, to avoid rewarding speculators, and to prevent possible financial contagion.  In response, Greek CDS prices plunged 20 percentage points.  Policymakers didn’t seem to care, but they should.  Those who bought CDSs believing that they were prudently insuring their bond holdings now face unexpected losses.  Sovereign CDSs have lost so much credibility that the troubled investment bank Jefferies felt it necessary to state publicly that it was not using them.  This credibility loss has spread to other sovereign CDSs, as shown in the bottom part of the figure above: the correlation between PIIGS debt spreads and CDS prices has plunged, indicating that CDSs are no longer viewed as reliable sovereign credit risk insurance.  Using CDS prices as a measure of default risk is now like setting your watch to a defective clock.  Yet the market is unlikely to die owing to Basel III bank capital regulations, which still treat CDSs as meaningful offsets against certain types of sovereign credit exposures.  This gives banks a perverse incentive to hold them just to reduce their capital requirements.  Given the permanent political distortion that Europe has introduced into the sovereign CDS market, it would be best now if the market could simply be shuttered.

Conference Call: Can the Eurozone Be Rescued?

Backgrounder: The Eurozone in Crisis