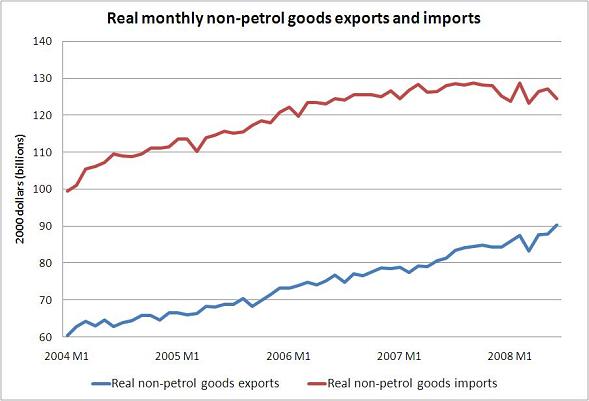 Exports of corn, beans (and other oilseeds) and wheat are up 90% in nominal terms, rising from $13.6b in the first half of 2007 to $25.9b in the first half of 2008. It isn’t all just higher prices -- real exports of foods, feeds and beverages are up 10%. The United States’ financial capital should be grateful it is linked in a currency union to the agricultural Midwest; think where the dollar would be if the US only exported repackaged residential mortgages. Quips about flyover country should stop ...

Not so long ago, important voices often argued that exchange rates had little effect on trade -- and particularly no effect on US-Chinese trade. I though would challenge anyone to explain -- credibly explain -- how both China and the United States experienced strong export growth in the first half of this year without mentioning exchange rates. Dollar depreciation is having the expected effect on US exports. And the RMB’s depreciation against the euro has had the expected effect on China’s exports to Europe.

There is only one problem with this story. Bringing the US deficit down, it now is clear, required dollar depreciation, stronger demand growth outside the US than inside the US and stable oil prices. Strong global growth in particular cuts both ways -- as it pushes up the price of oil and thus the US oil import bill even as it pushes US exports up. Falls in the dollar also cut both ways, at least to the extent that dollar weakness pushed oil up. I personally find the argument that high oil pushes the dollar down a bit more compelling, but there is a big debate on this.

In the first half of the year, the US non-petroleum goods deficit fell by $51 billion. But the petroleum deficit increased by $69 billion, pushing the goods deficit up. The services surplus improved by $25b -- bringing the overall deficit down a bit, but only a bit.

The good news here is that the current future price of oil is now below the June import price ($112 v $117 a barrel), which suggests that the deterioration in the oil balance may almost have peaked. July will be painful -- and maybe August too. But a fall in the monthly import bill is now in sight. The bad news is that the current market price is still higher than the average price of imported crude in the first half of 2008 ($96.4 a barrel), so there is still a bit of bad news to come. If petrol imports stay at their June level for the rest of the year ($45b), the US energy import bill would rise from $319b in 2007 to $495b in 2008 -- a $175b deterioration. That could be too high if oil continues to fall -- it is likely an upper not a lower bound. But it indicates that it is a bit too soon to project a huge improvement in the 2008 trade balance.

Remember, the same factor that has pulled oil down -- a slowing global economy -- should also pull US export growth down.

A few other interesting tidbits: 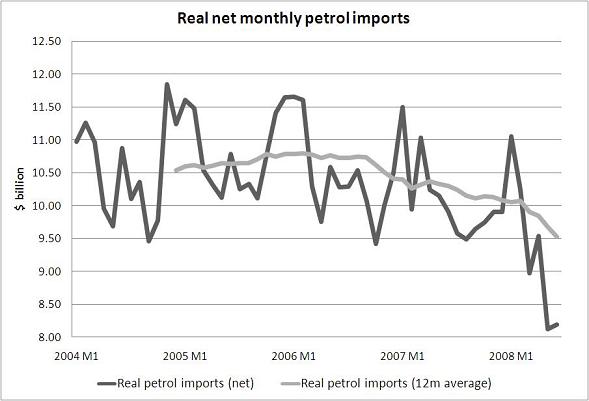 Thank the populist governments in Latin America than the US financial sector doesn’t exactly like: Exports to Argentina are up 49% in the first half of the year and exports to Venezuela are up 41%. Exports to Brazil are up a more modest 33%. On current trends, total exports to South America should soon top exports to Mexico.

No doubt there are more nuggets that can be found in the details of the trade data ...

UPDATE: Calculated Risk has a nice chart showing the petroleum and non-petroleum deficits over time. The contrast between the source of improvement in the deficit during the last recession and the current source of improvement are instructive. Last time around, the dollar was strong and almost all the improvement came from a fall in oil prices (when IT spending fell, it also cut into both US imports and exports -- producing a more symmetrical fall in non-oil imports and exports). This time around, the dollar is weak (at least against Europe, not so much v Japan and China) and the improvement in the non-oil balance accounts for all of the improvement.