There seems to be a bit of a debate. I am not a fan of many of the policies of the current Administration, but I don’t think though that the Bush Administration is exaggerating the depth of the problems in the US (indeed global) financial system right now. The administration, in my view, was far more guilty of understating the potential for deep trouble over the past year.

The New Yorker’s Nick Paumgarten recently noted that in this case the pros are more scared than the amateurs:

Often, the media exaggerates the significance of the ups and downs of the financial markets, while the sophisticates in the marketplace take them in stride. Not this time. Last week, the most farsighted market players were flabbergasted, even as they comprehended that they were witnessing a capitulation to some kind of greater truth—that Wall Street had got caught up in a pyramid scheme of its own devising.

I agree. It is quite rare for an economist at a major bank to make as dire a warning as Tim Bond of Barclays Capital did recently (via the FT):

As the freeze in the money markets persists, credit is rapidly becoming either completely unavailable or punitively expensive. This presents the world with an immediate risk of a surge in defaults as borrowers are unable to refinance. Needless to say, without an ability to lend, an economic depression threatens, as defaults erode bank capital and lending ability further. The countdown to a dramatically bad economic outcome is therefore running at very high speed. Unchecked, the current crisis would turn into a self-reinforcing vortex of defaults, bank capital contraction and deep recession within a matter of weeks.

The FT’s Alphaville isn’t normally as pessimistic as say Dr. Roubini, but Alphaville still noted that absent action from the US government: "a systemic crisis could well be realised." A run on the shadow financial system isn’t as visible as a run on a bank, but if not checked, it can have a similar impact.

A host of indicators suggest that markets remain distressed -- and that banks are hoarding cash rather than lending to each other. Look at the TED spread. Look at the moves in the LIBOR-OIS spread -- a measure of risk aversion -- recent moves were, at least if the past is a decent guide to the future (it generally isn’t, but that is a different topic), a one in almost 7000 year event. These are all measures of much more the banks have to pay to borrow.

Or look at a plot of the 3m t-bill relative to the 10 year Treasury (the data is through yesterday). Most of the time, the 3m t-bill is less volatile than the 10 year Treasury; it tends to move with the fed’s target rate for short-term funds. Recently though its yield has swung wildly as investors have -- depending on the moment -- piled into the safest dollar asset around. 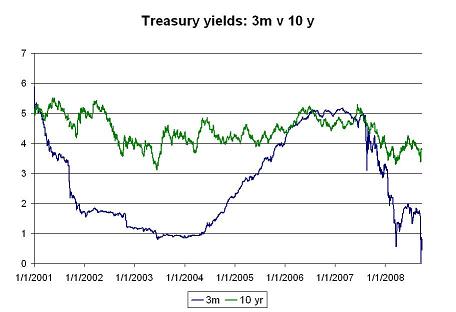 A plot showing the effective fed funds rate also provides -- I think, though I am not fully sure -- indirect evidence of distress. Usually the Fed has little difficulty meeting its target rate. But not recently. Effective fed funds has moved around even more than the 3m T-bill. 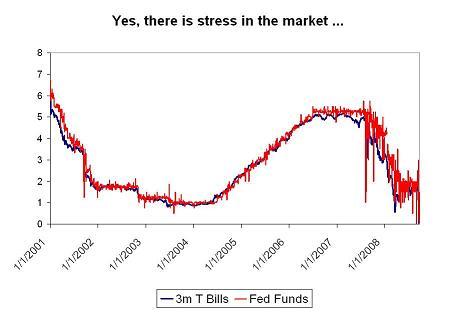 All sorts of indicators suggest a lack of confidence in the health of a set of financial institutions that are central to the United States financial system.

The details of Paulson’s proposal can be debated -- and they have been. But I at least do not doubt that there was a real need to develop a new approach to managing what increasingly looks like a systemic crisis in the US financial system. There are a broad set of institutions that have effectively made the same bad bet (levered long US housing credit) on a large scale. A scale measured in trillions, not billions. The increase in outstanding mortgage debt in the US since 2004, counting commercial mortgages, is in the order of $5 trillion, according to the Fed flow of funds. That means there are many weak institutions looking to get rid of the same bad bet -- not just one. And it has created a real problem.

We in the US need to make sure that we learn the lessons of the recent crisis and don’t allow ourselves to get into this kind of difficulty again. But the errors of the past cannot be undone magically either.

UPDATE: It looks like WaMu will join Lehman in defaulting on its bonds. JP Morgan is buying the deposits, but -- as I read the New York Times coverage -- not all of Wamu’s debts. Maybe now all the obviously weak institutions have failed, and the financial system can right itself. But I increasingly suspect the overall system lacks enough capital -- and even it weathers the current storm, it will be vulnerable to any additional shock.