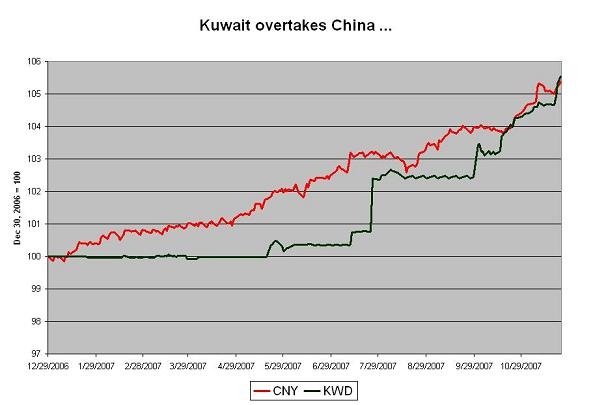 Kuwait hasn’t just managed the dinar against a (dollar-heavy) basket.    It has let the dinar appreciate against its basket.   That is the right policy.   Before it shifted to a basket, Kuwait had let the dinar follow the dollar down.  It needs to correct a real undervaluation not just protect itself from further currency volatility.

China, by contrast, hasn’t really managed the RMB against a basket.    It basically just has a crawling dollar peg.   The rate of crawl varies.   Right now the market expects the pace of appreciation (v the dollar) to pick up.   But for 2007, the total appreciation is likely to be around 6%.

The dollar has fallen by more than that against the euro (over 12%) than the RMB has appreciated against the dollar.   The result – as is now much more widely recognized – is that the RMB continues to depreciate against the euro and other European currencies.

And for that matter against a basket of G-3 currencies.   The following chart – based on a suggestion from former Treasury Secretary Larry Summers – shows the RMB’s nominal moves against a 40% dollar, 40% euro and 20% yen basket.    In nominal terms, the RMB has actually depreciated against this basket. 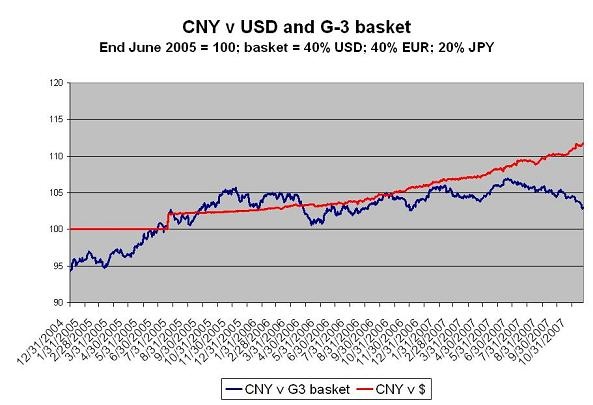 Is it really a surprise that Chinese export growth to the US has slowed while its exports to Europe are booming?   Or for that matter that China’s imports from Europe are now falling year over year?