Skip to main content
Lessons in Cleantech Success from Scandinavia (Pt. 1): The Puzzle

This post is co-written by Ben Armstrong and Varun Sivaram. Ben is a Ph.D. Candidate at MIT focused on Political Economy and a researcher at the MIT Governance Lab.

A global race is underway to dominate the clean technology (“cleantech”) sector. As international efforts to curb climate change intensify (the Paris climate talks kick off next week), demand for cleantech products that generate energy from renewable sources and reduce emissions will grow.  Countries that invent and scale such products will reap the economic benefits. For those seeking to understand why some countries are successful at building thriving cleantech sectors and others less so, a pair of Scandinavian neighbors—nearly twins in many economic and political respects—present a puzzle worth pondering.

Denmark and Sweden can both boast of low poverty rates, low inequality, and high environmental standards. But one striking difference between them is that Denmark’s cleantech sector has been considerably more successful than Sweden’s. Denmark is not only home to a cluster of leading cleantech businesses (e.g. Novozymes, Rockwool, and Grundfos), but its cleantech sales amount to nearly three percent of Danish GDP—more than any other country in the world.

Similar institutions, regulations, and social policies in Sweden have yielded far less impressive results in supporting an innovative cleantech sector. Although Sweden is a global leader in information and communications technology (ICT), it lags neighboring Denmark in cleantech. Sweden’s cleantech sales amount to less than one percent of its GDP; and its climate change patents are less than two-thirds that of Denmark despite Sweden’s larger population and overall patent portfolio. As relative leaders in the green economy, Denmark ranks 1st and Sweden 22nd. 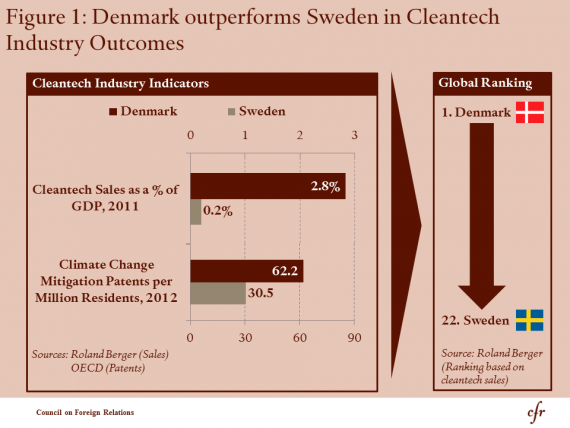 Why has Denmark had more success at clean tech innovation than its neighbor? The relevance of this puzzle is not limited to two small frigid countries. Rather, it might help explain what can differentiate some regions from their neighbors as both pursue a similar economic development strategy.  That Sweden boasts an innovative ICT ecosystem but lags in cleantech development suggests that the two sectors require different strategies.

These two Scandinavian countries shed light on a challenge for all advanced economies: how to implement responsible social policies that reduce carbon emissions and provide for the poor while also innovating to expand the economy. Both Sweden and Denmark have high tax rates that support successful social policies and still leave room for innovative industries. It’s the Danish example in particular that demonstrates how social challenges like climate change can offer great opportunities for new and expanding economic activity. The goal here is to explain what factors were central to Denmark’s success.

The academic literature tends to divide into two camps the factors that drive innovation: demand-pull factors, or favorable market conditions that “pull” innovation, and technology-push factors, or support for the research, development, and demonstration of innovative technologies. Although scholars sometimes disagree about the relative weight of each category of factor, the conventional wisdom is that each category of factor is necessary to induce innovation. So a logical way to explore why Denmark is outperforming Sweden in clean technology is to examine the difference between their respective demand-pull and technology-push factors.

Do Demand-Pull Factors Explain the Difference in Cleantech Innovation?

Environmental regulation is an example of a demand-pull factor that could encourage innovation in cleantech. The prediction is that bold environmental regulation might force a region to adapt to new constraints. New technologies will be required to retrofit buildings and adjust to new power sources (e.g. wind turbines, insulation material).

Another important factor might be consumer preferences. Although some European governments might make emissions pledges without popular support, local consumers need to be on board before those pledges can be implemented (or for those leaders to stay in power). One piece that might divide cleantech innovators from laggards is the opinion of the mass public on the importance of fighting climate change.

However, a comparison of Denmark and Sweden reveals little difference in these demand-pull factors. Their capital cities, Copenhagen and Stockholm, boast nearly identical environmental goals and trajectories. Both aspire to be emissions free in the coming decades and consistently rank as two of the most environmentally friendly cities on the planet. When asked to name the most serious problems facing the world, 73 percent of Danes and 81 percent of Swedes listed climate change. When asked whether fighting climate change and improving energy efficiency can improve the economy, 95 percent of Danes and 86 percent of Swedes said yes. Both countries have set similar emissions reduction targets and in aggregate their economies emit comparable levels of greenhouse gases (in fact, Sweden’s power sector is even cleaner than Denmark’s). Although more Swedes report relying on green forms of transportation like bikes and trains (61 percent) than Danes (46 percent), more Danes (57 percent) report purchasing energy efficient appliances than Swedes (33 percent). Overall, the two regions seem to have mirroring actions and attitudes toward climate change, yet one has been more active in commercial cleantech innovation than the other. 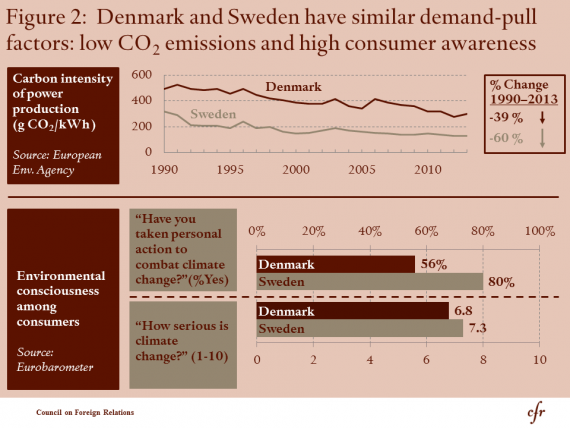 There are good explanations for why demand-pull factors may not suffice to induce innovation or to explain the difference between Denmark and Sweden. A region does not necessarily need to develop and implement the new technologies on its own. After all, it might be less expensive to import technologies produced elsewhere, particularly for a small country like Denmark with a shrinking manufacturing sector. Thus, environmental regulation might lead a region down two paths. The more convenient path in the short-term is to import cleantech products already available in the market. The more challenging long-term plan is to develop and produce the technologies domestically with intensive investment of R&D and manufacturing resources. If the development succeeds, these products initially developed for the domestic market can scale as exports to other regions adopting parallel environmental plans.

Similarly, a public preference to combat climate change does not necessarily require that the fight against climate change be waged with local technologies alone. The public might want to take on climate change, but be indifferent to how the battle unfolds. These two factors suggest that environmental regulation and supportive consumers can provide a captive demand for technology, but that demand does not guarantee cleantech innovation. It just might make it more likely.

Doubtful that demand-pull factors are the reason for Denmark’s cleantech success, we turn now to technology-push factors. Rather than examine whether the local market is primed to accept cleantech products, we might instead investigate public and private support for innovation.

A measure of direct support for innovation is the total level of research and development (R&D) spending. Unfortunately for this analysis, Sweden actually beats out Denmark in terms of R&D spending as a percentage of GDP. And although private investment in early-stage businesses as a proportion of GDP is mostly equal in Sweden (2.5 percent) and Denmark (two percent), overall venture capital spending has been higher in Sweden (5.4 percent) than in Denmark (3.2 percent). Sweden has nearly double the number of high-technology patents than Denmark. Stockholm is also widely considered an innovation hub for the software industry in Europe. 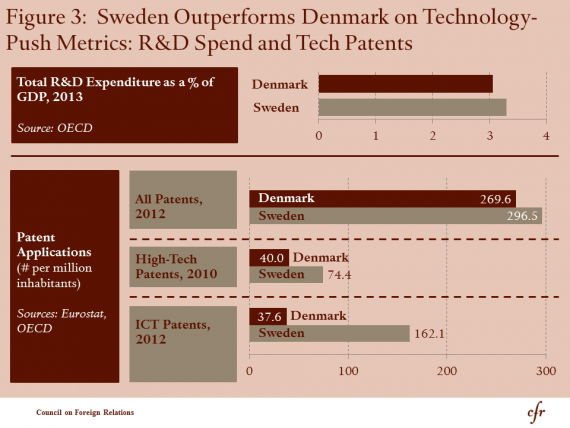 It could be that Denmark’s economic environment is generally better for innovation than Sweden’s. After all, the Danish government implemented labor market reform in the mid-1990s to combat high unemployment. While Sweden reduced public spending and changed some of its unemployment practices, Denmark overhauled its labor regulations to increase the flexibility of firms to hire and fire workers. It has also reduced the social security contributions that firms locating in Denmark must make; today it claims that locating in Copenhagen costs 20 percent less than locating in Stockholm. These reforms, the Danes might argue, make Denmark a more compelling environment for businesses to commercialize new innovations.

The cleantech boom in Denmark, according to this theory, would represent only one area among many where the Danes are out-innovating the Swedes. But this is not the case. In terms of knowledge-intensive employment and overall corporate tax rates, Sweden and Denmark are largely equal.

If the increased flexibility of the Danish labor market has indeed been an important factor, there needs to be a reason that it is influencing the cleantech sector far more than other sectors where Denmark has not been as competitive. You might think that Denmark could have deregulated specifically in the cleantech sector in ways that Sweden did not. However, the EU’s measures of energy deregulation shows that both Sweden and Denmark deregulated their energy industries at the same time and to nearly the same degree in the mid-1990s.

So far traditional explanations for innovation—demand-pull and technology-push factors— have led only to dead ends. Environmental and economic regulations, public opinion, access to finance, and other government intervention cannot explain Denmark’s comparative lead over Sweden in clean technology over the last several decades.

Continued in Part 2: “The Importance of Denmark’s Manufacturing Revival”

ORIGINAL POST: We invite readers to propose explanations for why Denmark has outperformed Sweden in cleantech innovation. Next week, we will share a follow-up post explaining our theory. Please use the comment box below to submit yours, and we will feature our readers’ thoughts in Part 2!

Will You be at the Paris Climate Talks?