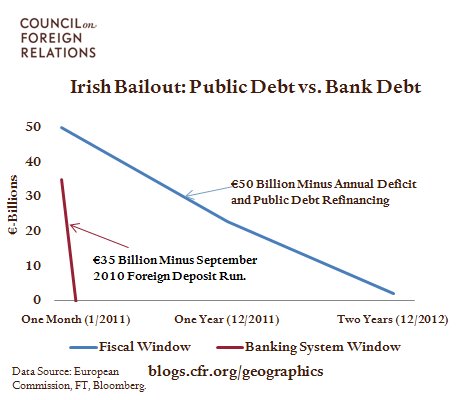 The EU-IMF Irish bailout gives Ireland a window of opportunity to solve its problems, but how large a window is it? Although the €85 billion headline number appears to be very large, at over 50% of Irish GDP, the funds must be benchmarked against what they are being earmarked for. €50 billion is tagged for public finances, which will cover two years of public debt refinancing and deficits. This provides a significant window for Ireland to achieve fiscal improvement. However, the window provided by the €35 billion tagged for banking sector recapitalization is much smaller. Over €34 billion of foreign deposits fled Irish banks in September 2010 alone. Over the past two years, Irish banks’ balance sheets have shrunk by over 9%, while their funding reliance on the European Central Bank has increased from 5% to 9% of total liabilities. This suggests that any Irish bailout plan, to be credible enough for the markets, must ensure that the Irish government ceases adding bank debt to its public debt. That will almost surely involve a restructuring – that is, a significant partial default – on the bank debt. Such a restructuring, however, will raise a slew of new bailout questions, since German, French, British and other European banks holding Irish bank debt may themselves require public assistance to remain acceptably capitalized.

Wolf: Why the Irish Crisis Is Such a Huge Test for the Eurozone

Wolverson: Aftershocks of the Ireland Bailout