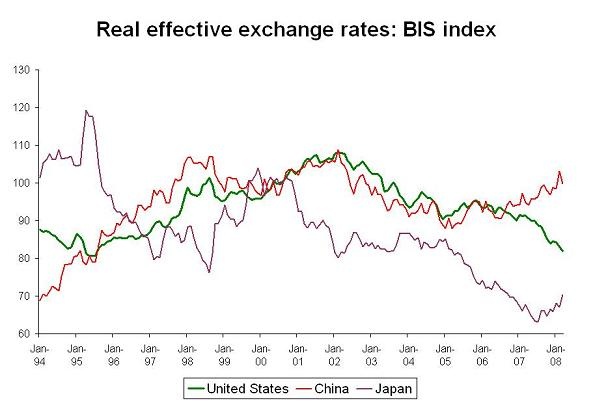 Chinese exporters have taken notice. Michael Pettis reports that exporters’ complaints are starting to influence the policy debate in Beijing. The influential Li Yang (a former PBoC advisor now at the Chinese Academy of Social Sciences) is now calling for a halt to RMB appreciation against the dollar.

Keith Bradsher of the New York Times reports that Chinese firms exporting to Europe now want to be paid in euros -- and Chinese firms exporting to the US want to be paid quickly. Some firms have apparently gotten burnt promising to deliver goods for dollars in the future only to see the RMB appreciate against the dollar before the goods were delivered, cutting into their profits.

Fair enough. These stories explain why exchange rate moves do have an impact on trade flows, despite often made arguments to the contrary. If the rise that the RMB will rise against the dollar (or for that matter the euro) makes Chinese producers more inclined to sell their goods for RMB in the domestic market, all the better. That is what should happen: domestic demand should displace external demand as the driver of Chinese growth.

Such complaints though strike me as premature.

Moreover, China’s real exchange rate remains below its level in early 1998. That doesn’t make much sense. China’s economy has been the best performing in the world over the past decade. That should translate into a real appreciation.

It strikes me as reasonable to assume that the pace of real appreciation that China experienced in the 1990s should have been expected to continue in this decade, which suggests a large gap between China’s current real exchange rate and its natural rate.

The ongoing pressure for real appreciation though is creating very serious policy challenges for the PBoC. Michael Pettis has this right. Frankly, China’s past timidity has put it in a position where it has few good options.

One option is to allow the RMB to appreciate in a gradual way against the dollar. This policy has the advantage of allowing firms time to adjust. They can avoid long-term contracts in dollars, or start hedging their dollar exposure in the forward market. A stronger RMB also will tend to lower import prices -- though this effect is muted if the RMB is rising at a slower pace against the dollar than the dollar is falling, and if commodity prices are still rising in RMB terms. It has the disadvantage of creating unambiguous incentives for anyone who can to hold RMB rather than dollars, particularly when Chinese interest rates are higher than US interest rates. The resulting hot money inflows can fuel rapid money growth and thus create inflationary pressures.

This incidentally is a difficult concept to explain. The stronger RMB helps lower the price of imports and thus reduces inflation (at least if the RMB were rising against something other than the dollar). But if too much money comes in to bet on further rises in the RMB, the influx of money can be a source of inflation. The overall impact is ambiguous.

One option is to avoid allowing the RMB to appreciate and to hold Chinese rates below US rates. A close variant is a policy of not letting the RMB appreciate by more than the difference between US rates and Chinese rates. This was the policy that China followed immediately after it "depegged" in 2005. But it was a far easier policy to follow back when US rates were higher than Chinese rates. Right now, such a policy would imply cutting Chinese rates so that they are below US rates even as Chinese inflation has picked up -- and limiting the RMB’s appreciation against the dollar even as the dollar depreciates against other currencies. Effectively, it amounts to a policy of allowing real appreciation through inflation. Central bankers in the UAE and Argentina could even provide China with lessons.

Another option -- one that many in China seem to be gravitating toward -- is to hold the RMB constant and rely on other policy tools to fight inflation. The PBoC could increase domestic Chinese interest rates. At least to me, PBoC governor Zhou’s remarks recently seem to hint at such an approach. Or China could try to limit inflation by, in effect, controlling prices. China right now is holding domestic petroleum prices below world prices (and in the process encouraging Chinese demand growth) -- a policy that requires China’s state oil companies use their profits from domestic production to offset losses on imported oil. Pettis reports that Xu Zhiman of the NDRC has said that "the government will not increase the price of refined oil or electricity until inflation is brought under control."

Such a policy means continued distortions -- with administered prices being only the most obvious. Moreover, it might not work. At least not in the sense of creating incentives to hold dollar rather than RMB. So long as Chinese interest rates are above US interest rates, there is an incentive to hold RMB rather than dollars even if the RMB is stable against the dollar.

Another option is a big move in the RMB -- one large enough to end expectations of further moves. But such a move would need to be large in order to really end expectations of further moves. Just think how far the euro has moved against the dollar over the last give years. Any move large enough to be effective would also be disruptive. A large share of China’s economy grew up around an undervalued exchange rate, and could well have trouble competing at market exchange rates.

Isn’t that, after all, what all the complaints about the RMB’s still modest appreciation against the dollar imply?

My core conclusion is that China should have moved much earlier, as further dollar weakness and a period of low US interest rates were imminently predictable. For too long Chinese policy makers avoided making hard decisions, in part because they hoped that if they waited long enough the dollar would recover. Their problem now is that the dollar in the end only slid further. As they waited, the gap between China’s managed exchange rate and a true market exchange rate only got bigger.

China’s policy makers are often said to focus on the long-term. Here though it seems at least to me that a desire to avoid short-term pain led to a series of decisions that created a bigger long-term problem.

But the past is the past.

Right now, I am in same camp as Wang Tao, Frank Gong and Michael Pettis: the least bad option now is a large one-off revaluation, probably in conjunction with efforts to tighten China’s capital controls. I increasingly though suspect that China will opt for a slower pace of appreciation and price controls.