The TIC data for May doesn’t lend itself to any overall story line.

Net long-term inflows were OK -- with foreign purchases of over $90 billion of US long-term debt offsetting the $25 billion or so in US purchases of foreign stocks and bonds. Foreign demand for US corporate debt reemerged (total official and private purchases topped $55 billion) but a little under half that demand came from the Caymans -- which is always a bit suspicious. Recorded official inflows were a bit low -- only $16.7b. But that is too be expected now that most official asset growth is in China, Russia and the Gulf. The US data consistently undercounts flows from all three. Chinese purchases of long-term US debt -- $35.6b -- were particularly strong (they exceeded total official purchases, which raises some interesting questions). However, China financed some of the long-term purchases were financed by running down short-term holdings, which fell by $15.9b. Overall Chinese purchases of around $20b are still low relative to Chinese foreign asset growth.

Moreover, as I’ll explain below, it makes sense to add the UK’s purchases of Treasuries and Agencies ($39.6b) to the "official" total -- which would bring official purchases of long-term up above $50 billion -- a more realistic level.

However, net TIC inflows were quite bad. After adjusting for amortization payments and the like, the net increase in foreign long-term claims on the US was about $45 billion. That wasn’t enough to offset a $56b fall in short-term claims on US banks. On net, $2.5b flowed out of the US. That cannot last for long. But I still don’t have a clear idea why short-term claims fell so dramatically.

Given all the interest in Agencies, I wanted to update some of the data I presented earlier this week.

But the UK now holds -- based on adding recent flows to the UK’s stock -- about $140 billion of Agencies. I would bet, based on the pattern of past survey data revisions, that $110b or so of those Agencies are really owned by central banks -- which would bring total official holdings over $1 trillion. 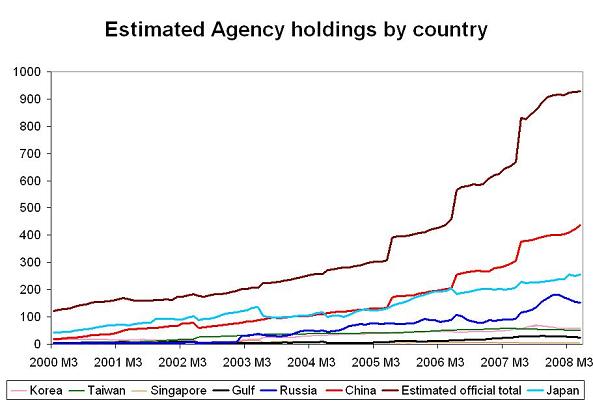 China holds $436.45b of long-term Agencies. It is reasonable to think -- based on its reported holdings of other short-term custodial liabilities - that it has about $20b in short-term Agencies. And it is also reasonable to think that a decent chunk of the Agencies the US sold to banks in the UK were then sold to the PBoC. On this basis, I am confident that China’s total Agency exposure is currently in the $500b range.

Russia’s holdings of long-term Agencies rose to $90.2b. Most of its $62b in other short-term custodial liabilities are in Agencies -- hence I continue to think Russia has around $150b in Agencies. I should note though that Russia has been increasing its holdings of both short and long-term Treasuries recently, so proportionately a smaller share of its reserves are in Agencies than in the past. Russia’s willingness to hold Treasuries is actually a bit of a change -- until recently, it almost never held many.

The Gulf, by contrast, has been selling long-term Agencies over the last few months. The Gulf’s recorded US holdings (which likely understate its total exposure, as the Gulf makes heavy use of external managers) of Agencies are only a bit over $20 billion.

Please remember that the recent "Agency" crisis will only start to impact the data for July, which won’t be out until September -- for a higher frequency read, look at the Fed’s custodial holdings.

Three final points, each of which responds to questions that I have received as a result of my post over the weekend.

First, why are my estimates of Agency holdings for a country like China higher than the "official" estimate from the Survey? Simple. The survey shows Agency holdings from last June. I have brought that data up to date by adding in flows.

Second, why do I believe the US data likely understates Chinese and Russian holdings?

The UK’s holdings of long-term Treasuries and Agencies over time: 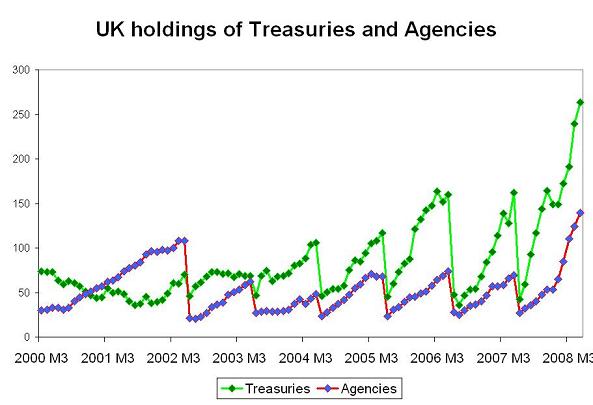 The UK’s holdings of long-term Treasuries relative to the holdings of China, Russia and the Gulf over time.* 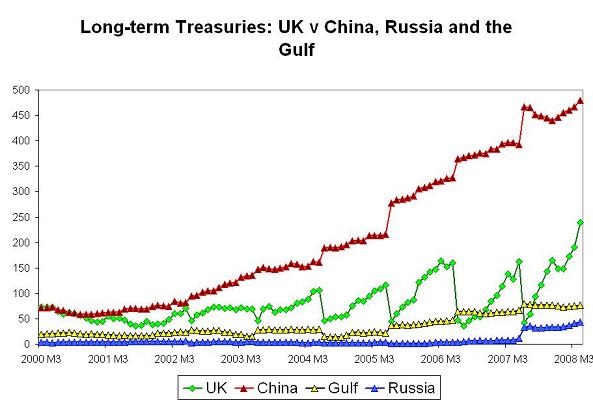 The UK’s holdings of long-term Agencies relative to the holdings of China, Russia and the Gulf over time.* 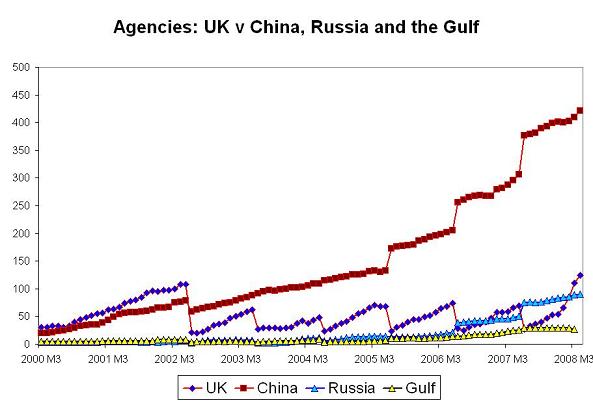 Incidentally, China tends to account for a larger share of the "UK" adjustment than the Gulf. That is why it is inaccurate to use flows through London as a proxy for oil flows.

There, of course, is a lot of Gulf money managed in London, and in other European financial centers. But that money doesn’t seem to be invested heavily in Agencies or Treasuries. The survey revisions don’t tend to dramatically increase the Gulf’s holdings. And if private fund managers were managing large portfolios for the Gulf, one would expect the UK’s own holdings to rise over time -- and they are not. Here though I should note that some of the Gulf’s holdings may be showing up in the rise in the holdings of other European financial centers over time. This is something that I need to investigate further.

Third, could the Treasury market absorb a big shift in central bank demand away from Agencies?

That actually is an interesting question, and not one that I can easily answer. China now has $491b of long-term Treasuries (and another $16b of bills), and central banks have $1525b of long-term Treasuries (and another $219 of bills). The outstanding stock of marketable Treasuries in May was $4665 billion. So central banks account for 37% (37.4%) of the total stock, and China accounts for around 10% (10.8%) of the total stock.

However, the survey data (see table 12b of the survey) suggests that central banks hold relatively few bills -- and only a small number of "long" bonds. Bonds with maturities of over 10 years account for only 4% of total official holdings. They also haven’t been big buyers (to my knowledge) of inflation linked securities. Most of their holdings are coupon paying notes -- i.e. Treasuries with a maturity of 10 years or less. And there were only $2475 billion of "notes" outstanding at the end of May. If all of China’s long-term holdings are "notes," China holds about 20% of the stock of notes (19.8%) and central banks hold about 60% of the stock of notes (61.6%). That is an overstates things a bit as central banks do have some longer-term bonds and linkers, but it nonetheless suggests that central banks hold an awful lot of the outstanding stock of coupon-paying notes.

The Treasury will be issuing more, of course. And the Fed has been reducing its holdings of Treasuries (bills in particular), further increasing the stock in the market. But if China and Russia redirected all of their purchases toward the Treasury market, Treasuries might become a bit scarce.

* Special thanks to Arpana Pandey for help analyzing the TIC data and preparing these graphs.