It isn’t hard to figure out why so many ships are sitting idle in the Straights of Malacca. A contraction in global demand has led to a sharp fall in global trade.

Somehow, the fact that US exports to China are down about as much as US imports from the world -- and US exports to Europe -- doesn’t come through in most reporting on the trade data (setting Mark Gongloff of the Wall Street Journal aside) And since we know that the sharp fall in US and European imports in the fourth quarter of 2008 and the first quarter of 2009 reflects a sharp fall in US and European GDP in those quarters, it also suggests -- at least to me -- that China experienced a quite sharp slowdown back then. 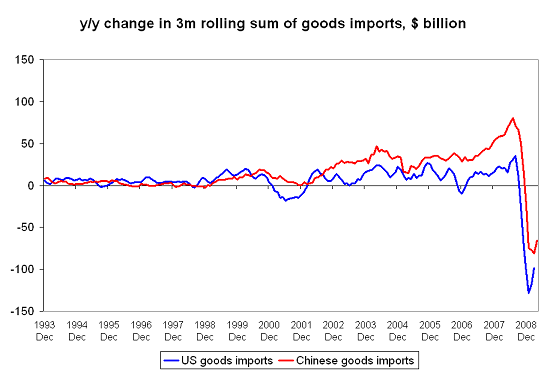 Some of the fall is due to a fall in oil and other commodity prices, and thus a fall in both countries oil and commodity import bill. And in China’s case, some of the fall in imports is tied to the fall in Chinese exports, as China’s exports have a higher imported content than US exports. But those aren’t the only factors at work either: China’s imports from the US (e.g. US exports to China) are also down significantly. 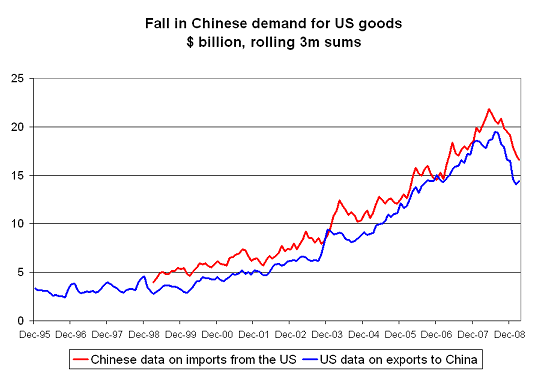 The US and Chinese data on this agree. The Chinese imports from the US are consistently a bit higher than US exports to China, as the Chinese data picks up some goods re-exported from Hong Kong -- but the y/y changes are similar. 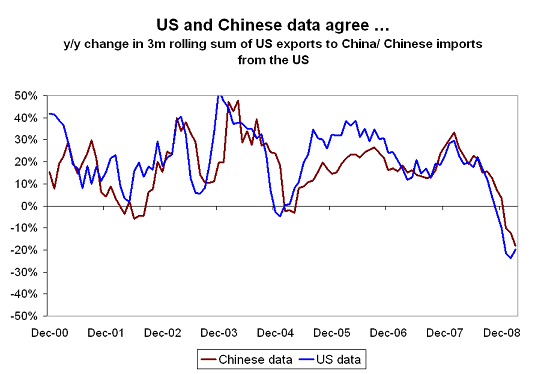 China doesn’t import that much from the US -- so the data on US imports may not be a perfect proxy for economic conditions inside China. Changes in Chinese demand for aircraft may not really reflect changes in Chinese demand. At the same time, the recent pickup in Chinese demand for earth moving machinery may not be perfect proxies for broader conditions inside China either, as Caterpillar benefits more than most from China’s infrastructure focused stimulus. But the data on trade with the US does suggest that Chinese demand -- in at least some sectors -- fell along side US and European demand last fall. Remember, China’s property and construction sectors were slowing even the Lehman crisis.

All this data is backward looking. Even if China slowed together with the rest of the world in the fall, China’s stimulus -- notably the huge increase in bank lending in the first quarter -- could starts to pull China up before the rest of the global economy. That should be reflected in the trade data, as a growing Chinese economy should but more from the rest of the world.

There are -- to be fair -- some green shoots in the data. Using a three monthly rolling sum smooths monthly volatility and thus is slower to pick up changes than the monthly data. And the monthly data does suggest that Chinese demand for the world’s goods is starting to pick up. The y/y fall in US exports to China in March was smaller than the y/y fall in January and February. And China’s April data showed a smaller y/y fall in imports (though not exports).

Turns are important, no doubt.

But so are starting points.

The trade data for the fourth quarter of 2008 and first quarter of 2009 suggests -- at least to me -- that China’s economy moved down in parallel with the rest of the global economy. China wasn’t an engine of demand growth then, nor was it a source of support for US exports. Let’s hope that changes.

On to the April Chinese trade data.

The US March trade data ...