While the climate talks continue in Cancun, the most important developments in climate policy are still happening at the national level.

Secretary of Energy Steven Chu gave a speech on Monday arguing that the United States is at risk of losing to China in a clean energy race. The most striking graph -- and Chu emphasized it in his presentation -- came near the start of his talk: 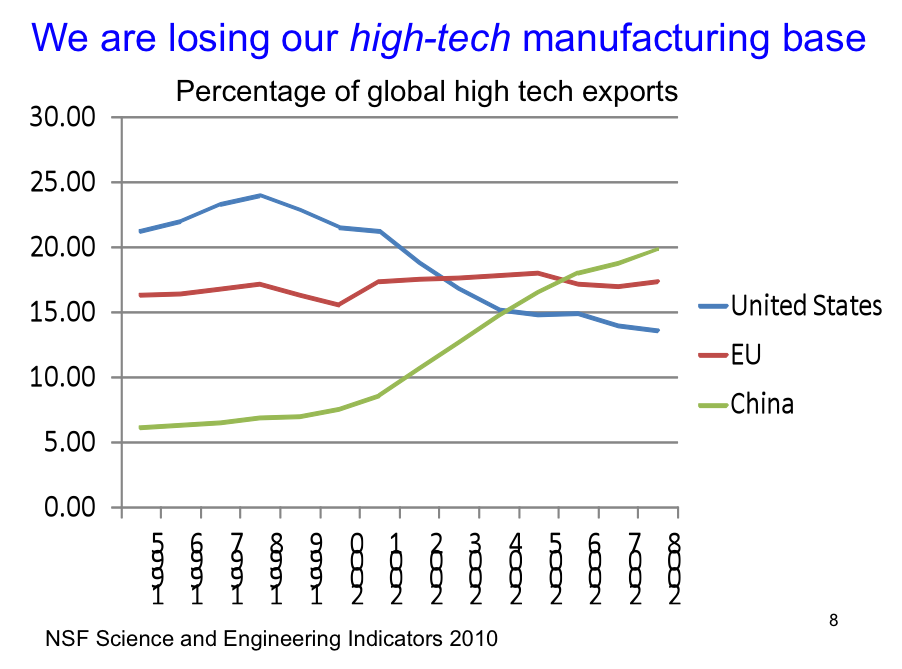 Looks scary, right? But if you flip back ten pages in the study that Chu uses as a source, you’ll find this:

Here, the U.S. is back firmly in the lead, with a steady share. China has gained, but at the expense of Japan. Whatever U.S. losses we see in recent years appear to be going to the EU.

What’s the difference between the two graphs – and which one should we care about?

The first shows the total value of exports; the second shows value added. It’s the second that describes the contribution than China makes – and the net revenue it gets. That’s the one that matters. Imagine that Japan makes most of a car for $10,000 and sends it to China where a $1,000 gizmo is added before the $11,000 car is finally shipped to the United States. The first graph would show $10,000 of exports for Japan, but $11,000 for China; the second would also show $10,000 for Japan, but only $1,000 for China, which clearly reflects what we’re actually interested in.

The reality is that China still tends to take expensive stuff from elsewhere and adds a little value to it before stamping “Made in China” on the product.

Yet a few pages later in the presentation, Chu makes a similar mistake. Here’s what he says about Suntech:

"Suntech imports the raw silicon crystal material from U.S. suppliers [emphasis in the original], manufactures the high-tech solar cells in a modern, automated facility in China, and is building assembly plants world wide, including the U.S."

"What is wrong with this picture?", he asks in the actual talk, as if the answer is obvious. I must admit that I’m not sure. Making highly pure silicon is a lucrative business. Making solar cells, less so. Yes, there’s a high-value-added intermediate step (making wafers), much of which is migrating to China, which may be a net economic loss for the United States. But as I’ve argued before, it’s far from obvious that the broader trend here isn’t a win-win for the United States and China. The high-tech silicon companies in Texas that are making money from a booming solar market (spurred in part by cheap Chinese contributions to the value chain) certainly don’t think so. Neither do the folks in Arizona who are assembling and installing the finished panels.

I’m not trying to be a Pollyanna – China poses a real competitive challenge in many respects. But it doesn’t help anyone to confuse the real situation.

Enough with the Kyoto Circus

A Path to Progress: How Voluntary Climate Action Could Redefine the Texas Fossil Fuel Landscape