Mike Dooley and Peter Garber argue (at VoxEU) that the recent crisis has nothing to do with “Bretton Woods 2” -- an international monetary system where reserve growth in the “periphery” financed deficits in the center. They write:

“the crisis was caused by ineffective supervision and regulation of financial markets in the US and other industrial countries …. [NOT BY] ….”current account imbalances, particularly by net flows of savings from emerging markets to the US,” “easy monetary policy in the US” or “financial innovation. ... the idea that fraud and reckless lending flourished because US financial markets were unable to honestly and efficiently intermediate a net flow of foreign savings equal to about 5% of GDP, while having no problem with intermediating much larger flows of domestic savings, is astonishing to us.” *

The authors of Box 1.4 of the IMF’s Spring 2009 World Economic Outlook also attribute the current crisis to risk management failures in large financial institutions and weaknesses in the regulation and supervision of such institutions.** The role of imbalances are downplayed, as a “disorderly exit from the dollar has not yet been part of the crisis narrative.”

The last point is hard to refute: the dollar rallied during the most intense phase of the crisis.*** Reserve growth stopped, but that was because private money moved out of the emerging world and into the dollar, yen and swiss franc after the crisis – not because the world’s central banks lost confidence in the dollar. The proximate cause of the most recent phase of the crisis was a collapse in private financial intermediation, not a collapse in key central banks’ willingness to finance US.

But the absence of the kind of dollar collapse that many postulated might bring Bretton Woods 2 to an end doesn’t imply – in my view – that there was no connection between a global system marked by large inflows from the emerging world and the current crisis. The key issue is whether or not the large net flow from the emerging world to the US and Europe created conditions that facilitated, directly or indirectly, the failure of private risk management.

A rise in offshore dollar deposits by central banks provided some of the financing for the growth in banks’ dollar balance sheets. Central bank inflows into offshore money market funds had a similar impact.

The availability of dollar funding allowed banks’ balance sheets to swell, with an associated rise in demand for complex financial products that generated a bit of yield.

This was particularly pronounced with European banks. Thanks to the work of the BIS, we now know that a host of large European institutions funded their dollar book – a book that included a lot of synthetic triple A – in the wholesale market.

This happened in US money market funds, who increasingly financed European banks taking a punt on risky US securities in order to pick up a bit of yield.

It seems to have happened among fixed income fund managers, many of whom underperformed their benchmarks in 2008 because they loaded up on riskier assets in good times. The Wall Street Journal:

"What went wrong? Most intermediate funds held far fewer of the safest bonds than were inthe index. Worse, as the credit crisis unfolded and prices of risky bonds collapsed, many managers boosted holdings of low-quality debt."

It also happened in pension funds. Some turned their fixed income portfolio into something like a credit hedge fund (it is hard otherwise to explain say Ontario Teachers’ 2008 fixed income returns). They needed higher yields than on offer in the Treasury or Agency market to meet their future obligations (in the absence of higher contributions).

The life insurers also likely reached for yield, even if one sets aside the special case of AIG’s financial products group.

Investment vehicles that borrowed short to lend long couldn’t make money buying “safe” long-term assets so long as central bank demand for longer-term debt helped keep the yield curve inverted. Various vehicles could have closed up shop and said, more or less, current market conditions aren’t conducive to our basic strategy. Most though took on more credit risk and increased their leverage to maintain a high return on equity as the yield curve inverted and credit spreads fell.

A host of financial intermediaries were in the same position as they special investment vehicles. The inverted yield curve put pressure on all institutions that borrowed short and lent long. Many though seem to have offset the natural pressure on their profits by expanding their balance sheets and taking more risk. There is a rough correlation between the inverted yield curve and the rise in ABS issuance in the US – 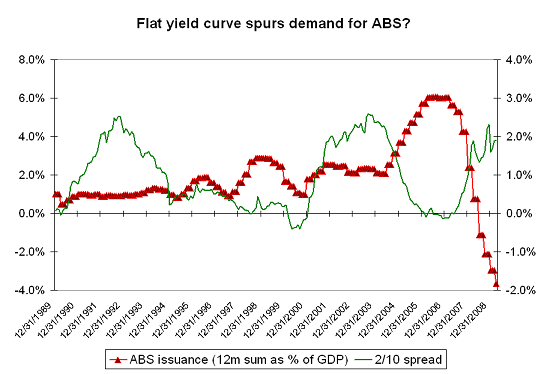 European purchases of US corporate bonds (including ABS) surged along with issuance from 05 to mid 07. Those European purchases collapsed in the middle of 2007. That marked the beginning of the crisis. The surge reflected demand from a mix of European banks that relied on the “wholesale” market for dollar financing and a slew of offshore vehicles, including some sponsored by US banks. My guess is that this demand was also a manifestation of the market impact of a flat yield curve.

I am not sure this provides the kind of theoretical or empirical evidence Dooley and Garber called for, but it could -- I hope -- provide a couple of hints that help further future research.

Another argument could be added to the list of potential links between the credit crisis and central bank demand for reserve assets, but it is a bit harder to document.

Central bank inflows helped helped create the illusion that a world with large imbalances could be a low volatility world. In the pre-crisis world, a shortfall in private demand for US assets would, generally speaking, be offset by a rise in central bank demand. Low volatility, in turn, meant that high levels of leverage appeared safe.

Dooley and Garber, I suspect, would argue that the stable flow from the periphery to the center from the emerging world’s central banks – i.e. Bretton Woods 2 –meant that it was rational for private players to bet on its continued stability. The rise in volatility during crisis, they would argue, didn’t reflect a fall in the United States access to external funding.

That though strikes as too narrow a view – especially with the benefit of hindsight. Central banks did step up their financing of the US when private flows faltered in 2006, 2007 and the first part of 2008, taking away one source of volatility. But Bretton Woods 2 – at least after 2004, back in the days when the US fiscal deficit was trending down -- required intermediaries willing to sell their safe assets to the world’s central banks and use the proceeds to invest in riskier assets. The gap between the increasingly risky assets (as loans backed by inflated housing collateral are more risky than loans backed by more conservatively valued homes) that the US economy was generating and central banks desire for fairly safe assets that had to be filled by private intermediaries. And as we now know, a failure in this process was a potential source of “volatility” inside the system, especially after the source of the US external financing migrated from the government to households.

To be sure, a surge in central bank demand for treasuries and agencies that pushed real rates down and inverted the yield curve didn’t have to lead to $4 trillion or so in (estimated) losses in the financial sector. Bankers didn’t have to take more risk to try to boost returns; they could have sat out the last dance. And even if they didn’t, regulators should have stepped in earlier, limiting the buildup of risk.

At the same time, absent official inflows, a shortfall in (net) private demand for US assets, relative to amount of external financing the US needed so long as US households were running large external deficits, would likely have cut the housing and lending-against-rising home values bubble off at an earlier stage, before it got so large. The recycling of the emerging world’s surplus back into the US regardless of the dollar’s slide or the relative performance of US assets helped allow financial leverage to build, as financiers came to believe that a world with large internal and external deficits was a stable world and thus high levels of leverage were warranted throughout the economy. That is one reason why the IMF, after initially discounting the importance of imbalances, ends up arguing that “a pattern of low interest rates and large inflows into US and European banks” encouraged “a buildup of leverage, a search for yield and the creation of riskier assets.” (see p. 36 of the WEO)

Back in March, the FT’s Krishna Guha -- in a box linked to a Gillian Tett missive on “destructive creation” -- wrote: "a more balanced economy might allow the world to live with a less perfect financial system"

* Net foreign inflows of 6% of GDP actually were fairly large relative to the US national savings rate (using the NIPA definition of savings), which wasn’t that fair from 12% of US GDP. Roughly a third of all investment – in a macro sense – in the US was financed by foreign not domestic savings.

** The IMF has changed its tune here. The IMF’s 2007 staff report on the US extolled securitization, arguing that it had left the “core” of the US financial system well capitalized.

One graph to rule them all ...