The amount the US borrows from the world is the gap between the amount that Americans save and the amount that Americans invest at home. That turns out to be equal to the current account deficit. And for the US, it so happens that the current account deficit is about equal to the (goods and services) trade deficit. The trade deficit -- at least in the first quarter of 2009 -- was way down. In dollar terms, it was about half as big as it was in the first quarter of 2008. That implies that the US is borrowing far less from the world now than at this time last year.

Why hasn’t the expansion of the fiscal deficit pushed the amount the US borrows from the world up? Simple. American households and businesses are borrowing a lot less, so the total amount of money that Americans are borrowing isn’t rising.

A picture is generally more effective than words. The following chart shows borrowing by various sectors of the economy -- households, firms and the government.** All data comes from the Fed’s flow of funds, table F1. 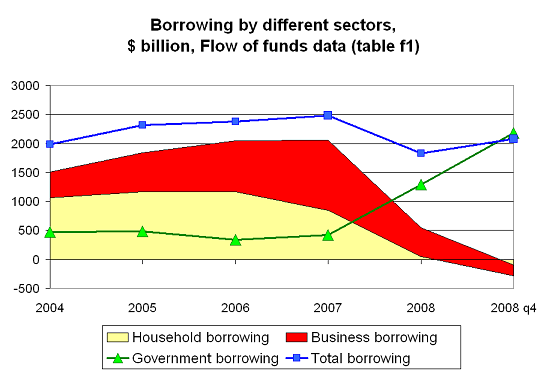 The last data point in the flow of funds data is from the fourth quarter of 2008. Q1 2009 data isn’t yet available, but the fact that the trade deficit fell so much in Q1 2009 suggests that total US borrowing isn’t rising -- at least not faster than US savings.

The fact that the rise in government borrowing has come even as other sectors stopped borrowing has made be a bit more sanguine than some about the ability of the US to find the financing it needs to sustain a large fiscal deficit.

But there obviously are still risks.

As households and firms rediscover their animal spirits and start to borrow more, the amount the government borrows needs to fall. Otherwise, total borrowing would rise, and the amount that the US needs to borrow from the world would rise.

Yet the crisis also has alerted China’s population -- rather belatedly in my view -- to the risks of lending to the US.*** The fiscal deficit is a lot more visible than the household deficit. That has had an impact on the popular debate inside China. So far the popular debate inside China hasn’t kept China’s government from continuing to add to its reserves and in the process finance the US. But it certainly has changed the tone of Sino-American discussions. Back in 2006 and 2007, China wasn’t talking about the need for the US to reduce its trade deficit by limiting the borrowing of US firms and households ...

The dislocations associated with the crisis temporarily eased the financial pressures facing the US. Americans sold their foreign assets faster than foreign investors sold their US assets (in part because American money market funds stopped lending to European banks, forcing them to scramble for dollars cash). But those dislocations have eased -- and with commodity prices rising on hopes that the emerging world will rebound quickly from the crisis, the US is likely starting to need to borrow more from the world just when private demand for American financial assets is starting to fade.

That isn’t terribly comfortable --even if it actually isn’t all that different from 2007.

* Technically, a current deficit can be financed by selling equity rather than debt, so equating the current account deficit with the amount the US borrows from the world isn’t quite right. But in general the US has financed its deficit by selling debt not equity, so it isn’t a bad rough approximation.

*** The risks that China is taking financing the US now aren’t materially larger than the risks China took financing the (large) US trade deficit of 2006, 2007 and the first part of 2008 in dollars at low rates. So long as China’s government keeps its currency systematically below its market clearing rate, it risks large currency losses. The fact that most of the deficit then came from excesses in the household sector didn’t diminish the risk.