A few weeks ago, the always interesting Michael Pettis argued that China is more like a friendly corner grocer – the kind who provides its customers credit to buy the store’s goods – than a banker. Chinese lending to the US does little more than finance the United States purchases of China’s goods.

"a very wide-spread claim — that China is Washington’s banker — is based on a misunderstanding of the reserve accumulation process ... it is probably more useful to think of China as a shop that sells to the US and accumulates IOUs, rather than as its banker. ... Banker’s lend discretionary money, whereas grocers only accept IOUs from important clients on purchases from the store.

There is no doubt some truth to Pettis’ argument, though other regions – Europe comes to mind – have managed to run a large bilateral trade deficit with China without relying so heavily on Chinese vendor financing.

But Pettis’ argument no longer works in full. Recently China has been providing the US with more financing well in excess of what the US needs to pay for its imports from China. Most grocers don’t provide store credit to help fill up their customers’ pick-up, especially grocers that don’t own any gas stations. Yet back when oil prices were here, China was in effect lending the US some of the funds it needed to cover its deficit with the oil-exporting economies – and with other goods-exporting economies as well.*

China’s rise as a true banker shows up cleanly in the most recent US balance of payments data. The detailed data tables include a table on China. And it turns out China’s $419 billion in purchases of US assets over the last 4 quarters exceeded the United States $308 billion bilateral balance of payments deficit with China. 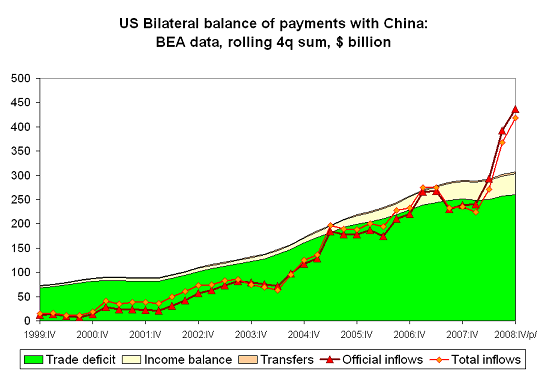 That’s a change. Back in say 2000, China used its large bilateral surplus with the US to finance a bilateral deficit with commodity exporters – and with Asian components producers. But over time the size of China’s surplus with the US (and Europe) rose, while the size of its bilateral deficit with Asia fell. Components production migrated to China. Throw in capital inflows (at least until recently) and China was in a position to buy very large sums of US debt.

The US data for 2008 actually understates China’s purchases. There is a large gap between China’s foreign asset growth and its recorded purchases from mid-2007 to mid-2008. The dip in China’s purchases then is a statistical artifact,one tied to the timing of the survey revisions. The last survey data -- which hasn’t been reflected in the BEA’s data yet -- suggests that China bought about $180 billion more US assets (mostly Agencies and equities, but also some Treasuries) than currently show up in the US balance of payments data. That revision would bring total Chinese purchases of US assets from mid 2007 to mid 2008 up to $450 billion – and official purchases up to $475 billion or so.** 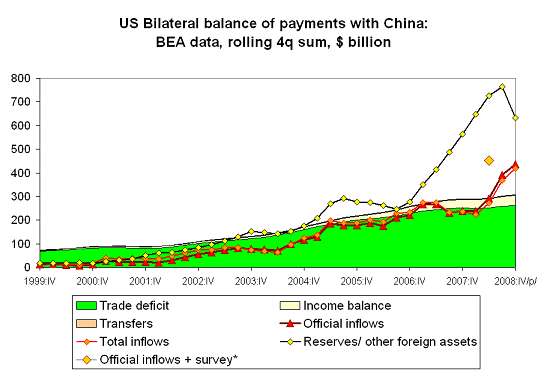 That is an unprecedented amount of financing for the US to receive from a single country’s government.

The US balance of payments data doesn’t provide a clean estimate of official Japanese flows – but it does allow me to strip out Japanese FDI and Japanese purchases of US non-treasury bonds and equities from Japan’s total inflows. The remainder would be a reflection of Japan’s official purchases, together with the Treasuries bought by private Japanese investors (and there are private investors in Japan with Treasuries, it isn’t just an official flow; Treasuries yield more than JGBs). Flows from China’s government now are larger, relative to US GDP, than flows from Japan’s government and safety seeking private investors ever were. 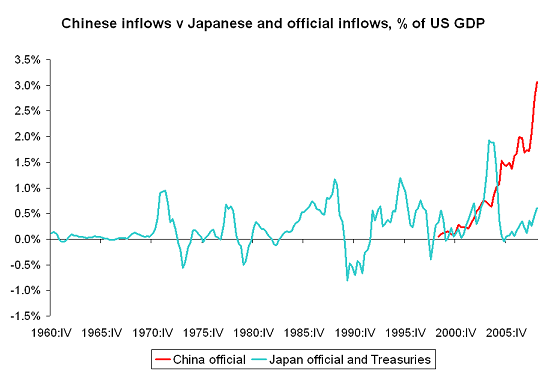 For that matter, flows from China’s government now are larger that total flows from Japan -- counting all private Japanese investment in the US -- ever were. 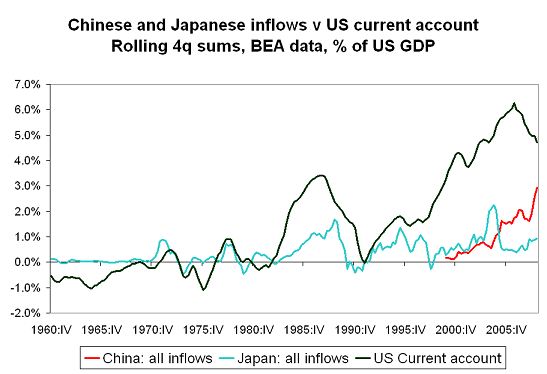 And China, unlike Japan, isn’t part of a security alliance with the US. That is why the scale of financing the US now receives from China truly is unprecedented: it is now not only tops the largest inflow the US ever received from another country, but it is clearly by far the largest inflow the US has ever received from a government that the US doesn’t consider a close military ally.

Chinese financing of the US may also fall a bit in 2009. Less private capital is flowing into China – indeed, private capital flowed out in late 2008 and the first quarter of 2009. That will allow China’s government to go back to being a grocer rather than a banker, and scale down its purchases of US assets.

At the same time, the fall in the surplus of Japan and the swing into deficit on the part of the oil exporters means that the world’s large imbalances – setting aside Europe’s internal imbalances—now largely reduce to China’s surplus (the World Bank estimates China’s surplus will top $400b, the IMF puts it at closer to $500b) and the US external deficit (estimated by the IMF to be around $400 billion in 2009).

In addition to producing bilateral balance of payments data, the US also provides (see table 5) a fairly detailed disaggregation of official (central bank and sovereign fund) purchases of US assets. Like the bilateral data on China, this data has yet to be revised to reflect the most recent survey – and it thus understates total official purchases from mid 2007 to mid 2008. It is still interesting. 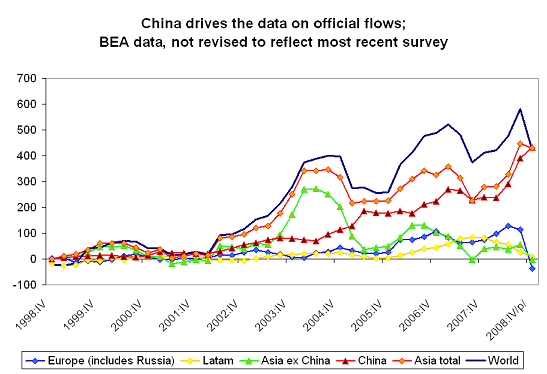 That confirms something I have long suspected: the Gulf’s purchases, including Saudi purchases, simply don’t show up in the US data. The Saudis added huge sums to their reserves and one assumes their dollar portfolio over the last year – and Saudi Arabia (along with the rest of the Gulf) should be counted as part of Asia (the data on the Gulf is reported as coming from “Asian” oil exporters).

And since China accounts for nearly all official purchases in the data over the last four quarters, the decomposition of the official data by instrument also tells us something about changes in China’s portfolio. 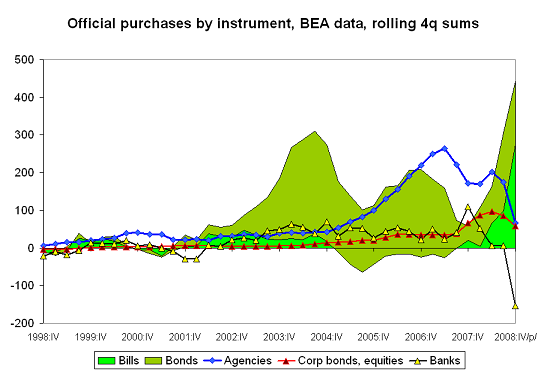 To be sure, the overall data matches China’s purchases only because non-Chinese sellers of dollars offset non-Chinese buyers, so the correlation isn’t perfect. But it isn’t all off either …

Warren Buffet likes to say that you find out who is swimming naked when the tide goes out. And with the tide turning – and much smaller purchases from other central banks -- China’s imprint on the overall data is increasingly hard to hide. I’ll be out of business soon. The dark arts of reserve tracking aren’t that useful in world with no reserve growth -- or a world where only one country is adding to its reserves.

Underlying BEA data can be found here. I used table 5 and the data for China and Japan in table 12.

* Ted Truman would object to any disaggregation of the data on the grounds that money is fungible, and China’s purchases of US debt finance a portion of not just the broad US trade deficit but also private capital outflow from the US. He is right of course, but there is still value in doing a bit of disaggregation -- as it highlights the change in China’s financing of the US.

** The US data indicates that private Chinese investors -- likely the state banks -- were net sellers of US assets in 2008. The survey also will revise China’s corporate debt holdings down; I didn’t reflect this in my adjustment though as I believe the fall in China’s corporate bonds in the survey is also a statistical artifact. The implied fall is around $40 billion, so it wouldn’t change the overall story.