Paul Swartz, my colleague at the Council’s Center for Geoecononomic Studies, continues to track how the current recession compares to past recessions. The United States fiscal deficit is now rising faster than in past cases. The biggest previous change was in 2000-2001 recession, when W’s tax cuts combined with a big cyclical fall in tax revenue to produce a large swing in the United State fiscal position. A modest surplus quickly turned into a large deficit. The swing in the United States fiscal position this time around is likely to be even larger. Counter-cyclical fiscal policy is back.

As Dr. Krugman notes, though, the case for a large policy response is simple: the economy is declining at a rapid pace. The US actually started to slow back in 2006, when residential investment tailed off. The recession formally started in late 2007 or early 2008. For a while it was possible to hope that the recession might prove to be fairly shallow. Exports were doing well, and the contribution of growth from net exports helped offset the fall in residential investment. And the American consumer seemed quite willing to keep spending.

But, well, things have changed. Rather than getting better, things are still getting worse. Exports are poised to fall sharply, as the world not just the US has slowed. And the fall in US industrial production has accelerated. The following graph comes from Paul’s chart book. The fall in industrial production in the current cycle is already worse than the fall in an average post World War 2 recession. 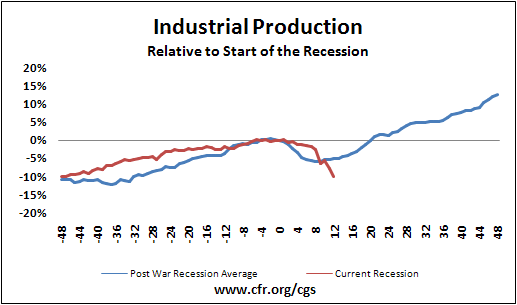 To help put this fall in context, Paul compared the current fall not just to the average but to the best and worst trajectories in the past data. 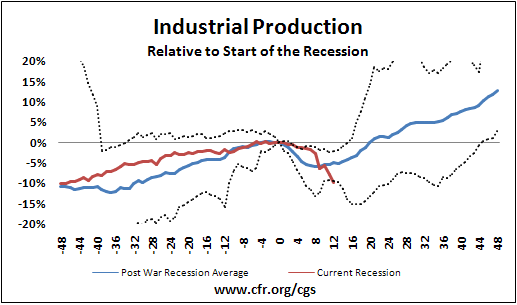 That is why -- despite the risks -- I support a large stimulus. The United States debt levels suggest that it still has room to use the public sector’s balance sheet to try smooth the economic cycle. And there is nothing moderate about the current cycle.

It would certainly be nice though if other countries joined in, especially those with large current account surpluses. Low oil prices are bringing the US external deficit -- and the United States need for external financing -- down even as the US government borrows more. This combination won’t last forever. The US government can help support US and global demand, but it would be best if it didn’t do so alone. The more countries like China do to help put their legions of newly unemployed to work at home, the better.

Still plenty to worry about ...