China released its end-August reserves, and there isn’t all that much to see. Valuation changes from currency moves do not seem to have been a big factor in August, the headline fall of around $15 billion is a reasnable estimate of the real fall. The best intervention measures -- fx settlement, the PBOC balance sheet data -- aren’t out for August. Those indicators suggest modest sales in July, and the change in headline reserves points to similar sales in August.

That should be expected. China’s currency depreciated a bit against the dollar late in August. In my view, the market for the renminbi is still fundamentally a bet on where China’s policy makers want the renminbi to go, so any depreciation (still) tends to generate outflows and the need to intervene to keep the pace of depreciation measured.* Foreign exchange sales are thus correlated with depreciation.

But the scale of the reserve fall right now doesn’t suggest any pressure that China cannot manage.

That is one reason why the market has remained calm.

Indeed the picture in the rest of Asia could not be more different than last August, or in January.

The won for example sold off last August and last January. More than (even) Korea wanted. During the periods of most intense stress on China, the Koreans sold reserves to keep the won from weakening further.

Not this summer. The slow measured slide in China’s currency against its basket hasn’t translated into selling pressure elsewhere.

And Korea is now quite clearly intervening to keep the won from strengthening. In July, the rise in headline reserves, the rise in the Bank of Korea’s forward book, and the balance of payments data all point to over $3 billion in purchases (the forward book, one of the best measures of what might be called Korea’s shadow reserves, matters; it rose by over a billion in July). There is only data for headline reserves for August at this stage, and this points to a further $4 billion in intervention. Scaled to Korea’s GDP, Korea bought about two times as much as China appears to have sold. And I would bet Korea’s forward book also increased, so the full count for August could be higher still. 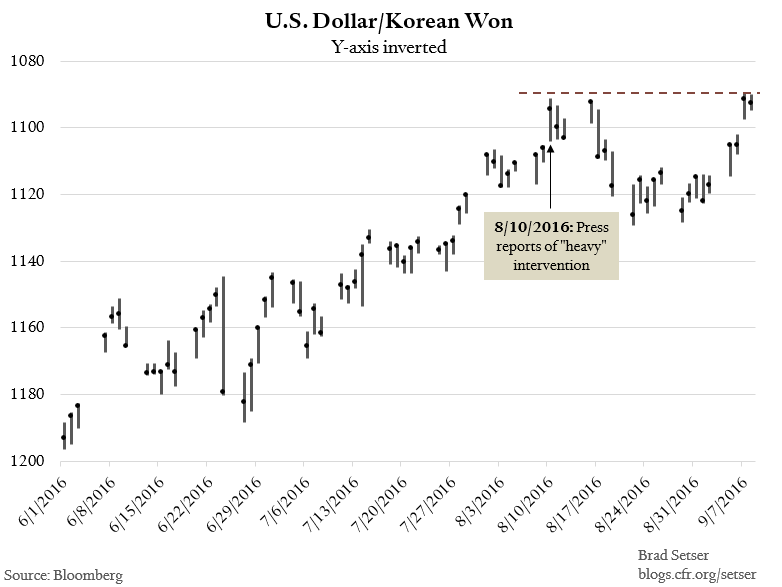 And with the won flirting with 1090, the level that triggered reports of heavy intervention in mid-August, the market quite reasonably is on intervention watch again. I am a long-standing fan of Reuters’ coverage of Asian fx markets. Reuters reported on Wednesday:

"The won rose as much as 1.2 percent to 1,092.4 per dollar, compared with a near 15-month high of 1,091.8 hit on Aug 10 ... The South Korean currency pared some of its earlier gains as finance ministry officials said the authorities are ready to take action in case of excessive currency movements. The warning boosted caution over possible intervention to stem further strength ..."

Taiwan’s rising reserves also clearly suggest that it too is buying foreign currency.

All this is very different from periods of acute China stress.

I should also note that with short-term external debt of around $100 billion and over $400 billion in reserves (counting its forward book) Korea is very well reserved by traditional metrics. It even has more than enough reserves on the IMF’s metric (p. 34 of the staff report), and the IMF’s new reserve metric tends to inflate Korea’s reserve need relative to traditional balance sheet measures: Korea has a high exports to GDP ratio and a relatively high M2 to GDP ratio. If you haven’t guessed, I am not a fan of the new reserve metric’s tendency to call on economies with large external surpluses to hold more reserves, relative to their economy, than their peers with external deficits.

* China reportedly intervened a bit after the G-20 meeting for example, as some believe China will now resume a controlled depreciation.