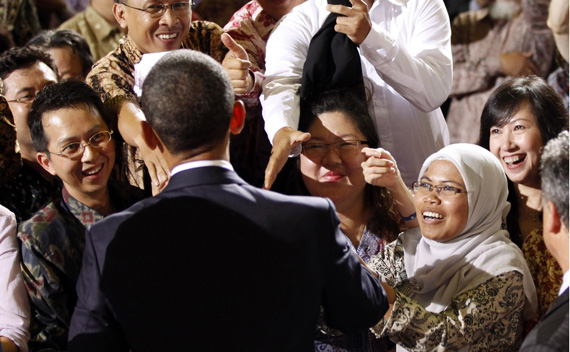 Overall, I thought that President Obama’s short “homecoming” visit to Indonesia went well. He charmed Indonesians, offered some funny reminisces about his youth, didn’t give his opponents too much more ammunition to claim he’s a Muslim, and set the agenda for the U.S.-Indonesia comprehensive partnership.

But you don’t want to hear that; it’s more interesting to focus on what went wrong, at least in my opinion. I have written this several times before, but I do not understand why the White House insists on highlighting Indonesia as a moderate “Muslim democracy,” as Obama did again Wednesday while in the country. It is certainly true, as anyone who remembers Jakarta in the late 1990s knows, that Indonesia has made impressive democratic strides, even though President Yudhoyono sometimes can be too willing to compromise with anti-reform politicians. And it’s also true that Indonesia has the most Muslims of any country in the world.

But highlighting Indonesia as a moderate Muslim democracy, to be emulated, has many flaws. For one, it’s viewed by many in the Middle East as peripheral to the debates and currents of thoughts in the Arab-Muslim world; as a result, few Arabs look to Indonesia for guidance on critical social, political, and religious issues. Secondly, this view of Indonesia basically excludes the country’s non-Muslims, when there are important groups of Christians, Buddhists, Hindus, and other religions in the country. There are certainly religious extremists in Indonesia who would love the country to be viewed as a Muslim state exclusively, and they have in recent years attacked Christians, heterodox Muslims, and others they consider non-believers.

Third, and most important, viewing Indonesia in this way trivializes and ignores its many democratic accomplishments, subsuming them to the idea that it’s a success story simply because it is free and Muslim. Since the late 1990s, Indonesia has solved several thorny autonomy disputes, federalized a great deal of political and economic power, reined in the army (to some extent), made strides toward greater involvement of women in politics, and taken other critical steps. These should be recognized, but they have little to do with the religion of most Indonesians.

Things to look for in Indonesia

A Review of “Man of Contradictions: Joko Widodo and the Struggle to Remake Indonesia” by Ben Bland