The attached graph -- used with permission -- comes from an excellent November 12 paper by Goldman Sachs’ Hong Liang. It shows quite clearly that the recent surge in Chinese growth hasn’t come from a surge in domestic demand; domestic demand is actually weaker than it was in 2003 and 2004. Rather it stems from a bigger contribution from net exports. 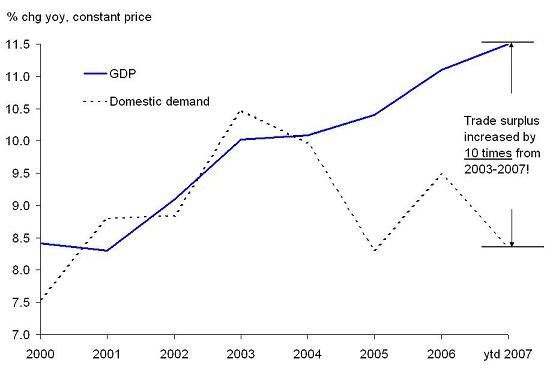 The data for 2007 is an estimate, but the final data for 2007 will unquestionably show a significant ongoing contribution from net exports to Chinese growth.

Liang’s paper -- "China’s Renminbi: An unbearable straightjacket for the central bank" -- would make for an excellent Economics focus piece. It also touches on a set of related but often neglected points: the link between the RMB’s depreciation against the euro on the rise of China’ surplus with Europe; the PBoC’s rising financial losses (when its foreign exchange reserves are marked to market in RMB terms) from holding more reserves than China needs; and the dramatic fall in domestic foreign currency deposits.

The only way I can reconcile the fall in household fx deposits with the banks rising fx position is an increase in the fx that the banks are managing on behalf of the central bank.

Hong Liang’s emphasis on the contribution net exports have made to China’s growth is important for another reason. Many smart, intelligent commentators highlight the rise in Asian demand, arguing that Asia has been a driver of global growth. But a region’s net contribution to global demand is a function of the difference between demand and supply growth. Recently, Asia has contributed more to supply than to demand -- leading Asia’ surplus to widen even as Asia’s commodity bill has soared.

China has decoupled to a degree from the US over the past two years. The US hasn’t been the engine of demand growth globally over the past two years. Net exports only subtracted 0.1% from US GDP in 2006, and they contributed 0.5-0.6% to US GDP in 07. US import demand has slowed -- with real imports in 2007 growing more slowly than real consumption (in part due to the fall in residential investment). Europe, by contrast, has emerged as an engine of demand -- growing more rapidly than the US. That has meant that China has shifted from relying on US demand to relying on European demand. Up until now, China has offset the slowdown in the pace of growth in its exports to the US with strong growth in its exports to other parts of the world.

For China to help support the global economy during a potentially rough period -- and for the world’s imbalances to shrink on a sustained basis -- China needs to grow entirely on the basis of domestic demand.

What to Know About the Border Conflict Between China and India