NATO’s twenty-eight member counties wrap up their annual summit today in Chicago. The parting sound bites no doubt will tout this year’s summit for being especially productive—even with a few breaks to throw a football around and to watch a soccer game. And the final communiqué will almost certainly point to progress on critical issues such as Afghanistan, missile defense, and alliance modernization.

But that sunny talk won’t hide a dark cloud that hangs over the most successful military and political alliance the world has ever known—namely, the United States accounts for the vast (and increasing) bulk of the alliance’s military spending. The chart below from the Associated Press makes the point: 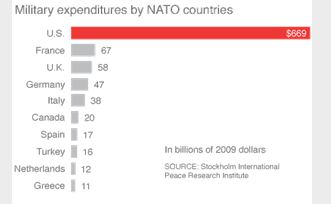 That disparity is not likely to lessen anytime soon. Not in an era of austerity when most of Europe is looking to cut spending. Indeed, with all the talk of a possible “Grexit” and fears that the financial markets might turn on Spain and Italy, the pressure in Europe to cut defense spending is likely to intensify.

It’s not just me pointing to this unpleasant fact. Here is what Ivo Daalder, the U.S. ambassador to NATO, had to say recently about European defense spending. (Full disclosure: Ivo and I have co-authored a thing or two over the years.)

I don’t see that loosening the austerity constraints that currently exist will now lead to a massive increase in European defense spending. But it is clear that we need more defense spending if you look at just two statistics. A decade ago Europe still spent 50 percent of the total amount that NATO spends on defense. Today, even after the cuts that the United States has engaged in, 70 percent is U.S. spending, and 30 percent is Europe.

Now, part of it is because the United States expanded its defense spending in the last decade, but the other part of it is that Europe has been cutting it. And there will come a time when if you continue that divergence between European and American defense spending that the gap becomes so large, the ability to operate together in military operations becomes so constrained that there is a real need to start thinking about how do we meet the ability of the Europeans to be good partners and strong partners—as we saw in Libya, they can be—but continue to be over the future. And that will require not only spending more, but it also will require Europeans to spend better and smarter.

That is a critical point to keep in mind when mulling over suggestions like Anne-Marie Slaughter’s thoughtful call for “globalizing NATO.” NATO certainly can do “bigger and better” things. But it most assuredly won’t if current spending patterns persist.