Central banks haven’t lost their appetite for Treasuries. At least not shorter-dated notes. John Jansen noted before yesterday’s 2-year auction "the central banks love that sector [of the curve]." And the auction result certainly didn’t give him cause to backtrack. Indirect bids -- a proxy for central banks -- snapped up close to 70% of the auction. Jansen again:

The Treasury sold $ 40 billion 2 year notes today and the bidding interest from central banks was frantic. The indirect category of bidding ( which the street holds is a proxy for central bank interest) took 68 percent of the total. That leaves about $ 13 billion for the rest of us.

Strong central bank demand for Treasuries shouldn’t be a real surprise. Reserve growth picked up in May: look at Korea, Taiwan, Russia and Hong Kong. There are even rumblings - based on the data that the PBoC puts out -- that Chinese reserve growth picked up as well. The rise in reserve growth fits a long-standing pattern: emerging markets tend to add more to their reserves -- and specifically their dollar reserves -- when the euro is rising against the dollar. A fall in the dollar against the euro often indicates general pressure for the dollar to depreciate -- pressure that some central banks resist (Supporting charts can be found at the end of a memo on the dollar that I wrote for the Council’s Center for Preventative Action).

And the Fed’s custodial holdings (securities that the New York Fed holds on behalf of foreign central banks) have been growing at a smart clip. Recent talk about a shift away from a dollar reserves by a few key countries actually coincided with a surge in the Fed’s custodial holdings. Over the last 13 weeks of data, central banks added $160 billion to their custodial accounts, with Treasuries accounting for all the increase. 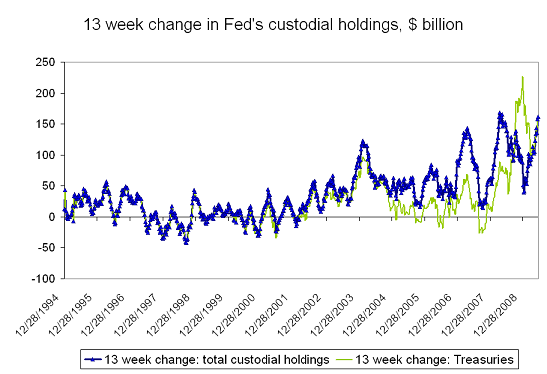 $160 billion a quarter is $640 billion annualized -- a pace that if sustained would be a record. Of course, $640 billion in central bank purchases of Treasuries would still fall well short of meeting the US Treasuries financing need. The math only works if Americans also buy a lot of Treasuries. That is a change.

China may be in a different position, but it likely will find that scaling back its dollar exposure is hard so long as it wants to maintain a dollar peg ...

But the Fed’s data is the best high-frequency data we have got. And if central banks reserves are up and the Fed’s custodial holdings are up, Occam’s razor suggests that central banks are adding to their dollar reserves.

That isn’t to say all is well so long as central banks are adding to their dollar reserves.

On one hand, there is a risk that a return to excessive reserve growth will keep the United States trade deficit from continuing to adjust. They could make it harder for exports to spur US growth. A depreciating dollar is once again producing a depreciating RMB.

And on the other, central bank reserve managers are a lot more comfortable holding short-term US notes than longer-term US notes. There consequently is a potentially a gap between what central bank reserve managers want to buy and what the US wants to issue. That is a more subtle version of the argument that central banks won’t finance the US deficit. Central banks might finance the deficit but not by buying the tenors the US really wants to sell.

Central banks could be clustered at the short-end of the curve because they fear that US inflation will rise -- and they don’t want to be stuck with longer-term US bonds then. Or they could just worry that they will buy a bond that yields 3.5% only to see yields rise to 4.5%, producing a mark-to-market loss. Or it could just be a mechanical result of central banks aversion to the risk of any (mark-to-market or accounting) loss. More volatility means a high probability that a longer-term Treasury portfolio might lose value. That mechanically might lead some central banks to shorten the maturity of their holdings.

But there is a limit to how far central banks can go. Bills don’t produce any income, and most central banks need some income from their reserve portfolio. When the yield curve is steep, that generates pressure to hold something that has a slightly longer maturity. The two year note seems to be hitting central bank reserve managers’ sweet spot -- and today’s auction suggests that central bank demand for somewhat longer tenors could be picking up as well.

UPDATE. From last Wednesday to this Wednesday, the Fed’s custodial holdings were pretty close to flat (looking at the data from the end of the reporting week, not the change in the weekly averages). From May 27 to June 24 (a four week period), the custodial holdings rose by about $30 billion, with an increase in Treasuries of a bit less than $40 billion and a fall in Agencies of a bit less than $10 billion. That is a solid increase, but a much slower increase than in May -- when an uptick in capital flows to the emerging world pushed up reserve growth.

* One caveat: the recent rise in indirect bidding may be -- in part -- a function of changes in auction rules. "Guaranteed bid arrangements" through the primary dealers have been eliminated. See Jansen (and ultimately the reporting by Min Zeng of Dow Jones)

Where is the spillover? China’s stimulus isn’t doing much to support Japanese demand