Korea reports its trade data faster than anyone. Korea also exports a lot. That makes it a useful – though imperfect -- indicator of the state of global demand.

The strong bounce-back in Korea’s April exports suggested that the sharp contraction in global trade that followed Lehman’s collapse had come to an end. Alas, the May data isn’t completely consistent with the current market narrative of global recovery.

Exports fell back a bit from their April levels. 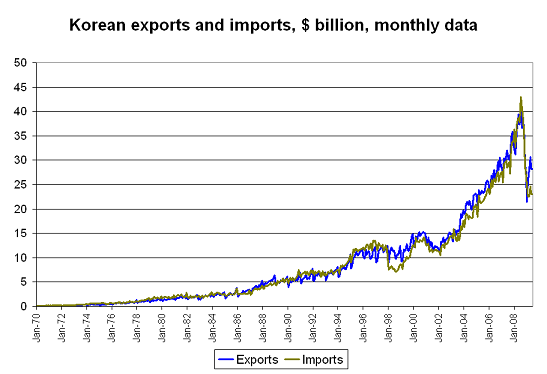 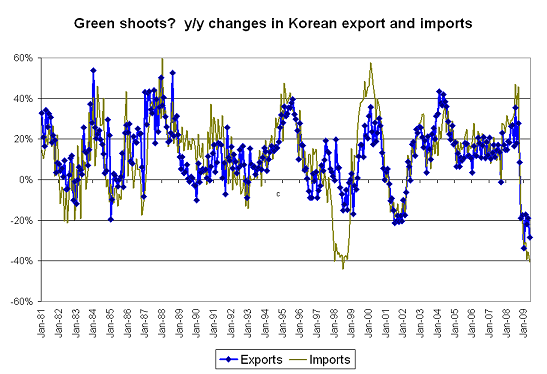 Taiwan also reports its data quickly. Year over year, its exports are still down more than Korea’s (31% v 28%). But May’s exports were a bit higher than April’s exports. That at least hints at a recovery.

Korea’s May data leaves no doubt that the current downturn exceeds the 01 downturn. And the .com bust was focused on electronics – and thus hit Korea hard. Moreover, Korean exports have held up better than exports from many other countries, that in part to the won’s large depreciation. Korean auto sales in the US aren’t down as much as overall sales.

To put it differently, Korea is in better shape than Japan. Even so, the fall in Korean exports has been sharp. In dollar terms, they are somewhere between their 2006 and 2007 levels.

Imports though are down even more – thanks to the fall in commodity prices. And I would guess that domestic demand growth hasn’t been particularly robust. That has kept Korea’s trade surplus at record levels.

Here Korea is much like China. Exports are down, but so are imports. So the overall trade surplus isn’t down. In Korea’s case, the surplus is actually up quite significantly.

Like everyone else, I am curious to see what China’s May trade data tells us. If China truly is going to lead the global recovery, China needs to import more – and not just import more commodities for its (growing) strategic stockpiles.