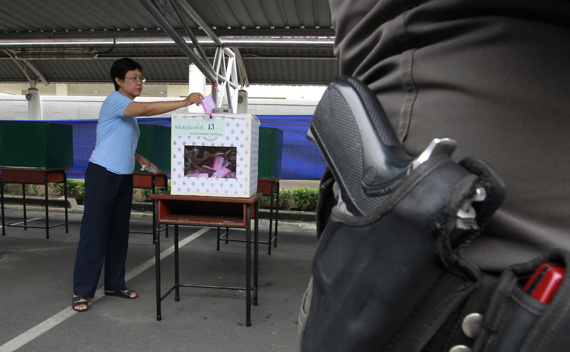 After a summer of repression, much of the fire of the red shirt protest movement in Thailand appears, on the surface, to have evaporated, though some red shirts have been holding symbolic protests every Sunday, and getting a small crowd. The fact that the ruling Democrat Party won a recent by-election and local elections in Bangkok have been touted by much of the domestic press in Thailand as evidence that the Democrats, and Prime Minister Abhisit Vejjajiva, have won the public trust once again. Strong recent economic growth reports have added to the improved mood in Bangkok.

But this positive narrative is patently false. The Democrats already were strong in Bangkok – remember, the middle class supports the Democrats in Thailand, and the middle class lives in Bangkok – so it was hardly surprising that the Democrats took the Bangkok elections and a by-election for parliament in Bangkok. And in that by-election, the candidate of the red shirts’ party, who was in jail on charges related to the protest, still only lost by a relatively narrow margin. That’s right – he was in jail during the campaign – that kind of makes it tough to promote his positions to the electorate.

As the blogger Bangkok Pundit has noted, the red shirts’ party got roughly the same percentage of the vote in the Bangkok by-election as they had gotten in previous parliamentary polls for seats in Bangkok, and the Democrats did roughly the same as well – despite the fact that they were facing off against a candidate who was in jail. What’s more, as a recent New York Times article captures, outside Bangkok, the mood in Thailand is of sullen resentment toward the government,  rather than any kind of shift. This resentment has been bottled up by tough security measures, and a high degree of online censorship, but it has hardly gone away. The continuing repression over the summer, too, has made it much harder for the government of Prime Minister Abhisit to actually pursue its supposed policies of national reconciliation, since at the same time it is alienating many of the people it is attempting to reconcile with. The tension will erupt again.

A Review of “How China Loses: The Pushback Against Chinese Global Ambitions”