Ok, the Treasury can not borrow for free. Three month Treasury bills, according to Bloomberg, yield something like 2 basis point. 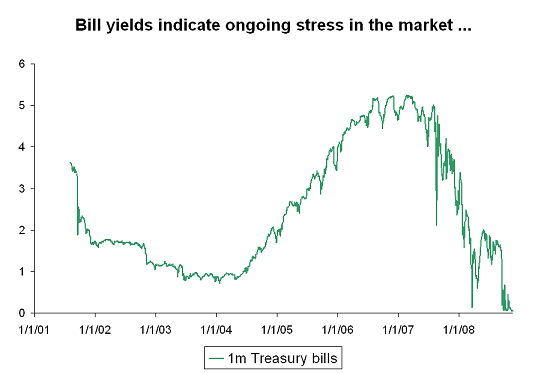 Treasury yields aren’t hard to calculate. But they are still my favorite indicators of the scale of the current crisis. The fact that so many are willing to lend so much to the US Treasury for so little is a clear indicator of a lack of confidence in other financial asset. Dr. Krugman is right. Market analysts are more or less saying the same thing: "“Where the credit markets are trading, it’s all but implying a 1929 scenario,” said Joe Balestrino, fixed income strategist at Federated Investors"

I can not match John Jansen’s market experience -- but I share his amazement at the scale of the moves in the Treasury market today. Jansen:

The Long Bond is trading at a yield of 3.43 percent and the dollar price has exploded 9 points today. I have done this for nearly 30 years. I have never witnessed this before.

The rise in the price of the ten year bond wasn’t quite as dramatic, but the rise in price (and fall in yield) still shows up quite cleanly. 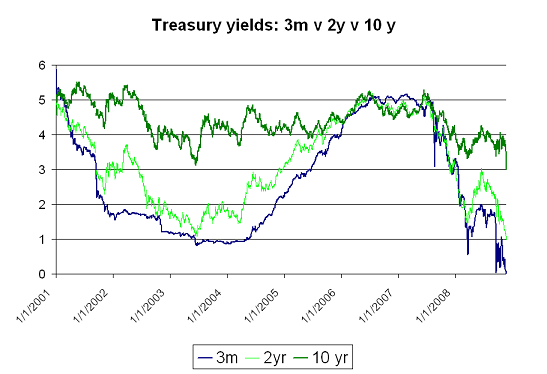 Suffice to say that surge in Treasuries -- and rise in credit spreads -- isn’t a good sign. Investors (including central banks) aren’t willing to accept anything that just has an implicit government guarantee -- let alone debt with real risk. Right now they want nothing less than the full faith and credit of the US government.

p.s. I would be interested to hear a true believer in the efficient market hypothesis explain recent moves in 30 year swap spreads. For a primer, read Jansen.

"The 30 year swap rate is 2.84. It has dropped about 80 basis points on the day and is about 60 basis points rich to the 30 year Treasury.I just spoke with an options trader about this historic move. He said that there structured product trades buried in trading books all over the world which are melting. There is a massive short in the 30 year sector (in Treasury paper and in the swap market) which resulted from sales of cheap volatility. Some of these positions have been on the books of various entities for years and it is only recently that the chickens have come home to roost. Each time the spread turns more negative, that movement forces some one to receive in swaps to hedge there position. There are short the long end trades in every permutation and combination along the curve. The receiving creates a self fulfilling prophecy which compels someone else to receive."

I am no expert on swaps (to put it mildly) but it sure seems like the current move is driven by something other than fundamentals. A negative swap spread -- according to the FT -- implies that "investors are somehow reckoning that they are more likely to be paid back by a private counterparty than by the government." That doesn’t seem consistent with what the rest of the market is telling us ...

There is now little doubt ...