Today, Adam Entous reported the latest confirmation about what informed citizens already knew: the White House’s purported policy guidance for U.S. lethal counterterrorism strikes issued on May 23, 2013 does not apply to CIA drone strikes in Pakistan. The CIA may still target unknown individuals, and they do not have to pose a purported "imminent threat" to the United States. This was widely reported at the time publicly, and I was told by a then-member of a congressional oversight committee that this exception was made clear to them as well. This substantial carve-out for the standards of who can be targeted that apply in Pakistan versus Somalia or Yemen call into question the entire 2013 reform efforts of the Obama administration. Though, long before today, it has been increasingly apparent that U.S. drone strike practices have not matched the promises that President Obama made two years ago.

Moreover, this further demonstrates how drones routinely work at cross purposes with other U.S. foreign policy interests. As Secretary of State John Kerry said soon after Obama’s much touted speech, “The only people that we fire a drone at are confirmed terrorist targets at the highest level after a great deal of vetting that takes a long period of time. We don’t just fire a drone at somebody and think they’re a terrorist.” In August 2013, Kerry also pledged while in Pakistan that the guidelines applied to all U.S. drone strikes (we now know this is untrue), and that Obama had “a very real timeline and we hope it’s going to be very, very soon” for ending drone strikes (also apparently not true). What is unclear is whether Kerry was being deliberately misleading or was unaware that the policy guidance does not apply to Pakistan. Either way, it makes America’s leading diplomat appear less credible and believable. 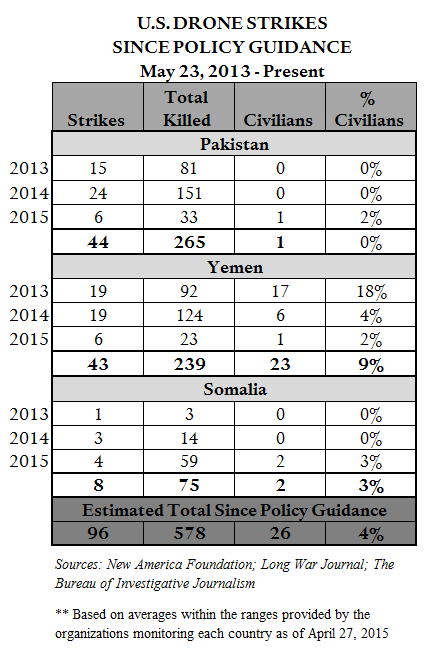 On Thursday, when President Obama wisely declassified the circumstances of the tragic incident regarding Warren Weinstein and Giovanni Lo Porto, he declared, “As President and as Commander-in-Chief, I take full responsibility for all our counterterrorism operations, including the one that inadvertently took the lives of Warren and Giovanni. I profoundly regret what happened.” This, albeit selective, account is admirable. Now, it is long past time that Obama publicly extends the same sympathies to the family of sixteen-year-old Abdulrahman al-Awlaki, a U.S. citizen inadvertently killed in a drone strike in Yemen on October 14, 2011.

You Might Have Missed: Drone Strike Policies, North Korea, and Conflict Prevention