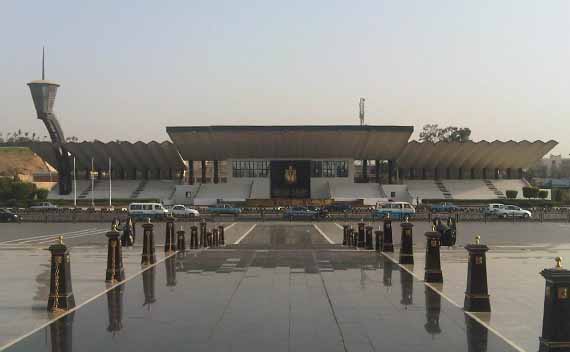 Cairo - I had some down time today, and this being October, I braved the traffic and went out to Nasr City to visit the 1973 War Panorama, which commemorates al Ubuur or “the Crossing” of the Suez Canal, a truly momentous and celebrated event in Egyptian history. From there, I traveled to Nasr Road, where President Sadat was assassinated on October 6, 1981 at a military parade to commemorate the war. The picture above was taken from Egypt’s Tomb of the Unknown Soldier, where the martyred president is interred.

Other than the fact that I hadn’t been to the Panorama since my very first visit to Cairo 17 years ago, I also went to visit because the Crossing has indirectly caused some controversy for the past few weeks. The following story has some twists and turns, but stick with me: Recently, the new owners of the independent daily al Dustour fired the paper’s outspoken founding editor, Ibrahim Eissa, for his intention to publish an article by Mohamed ElBaradei, in which he asks whether Egypt could pull-off the Crossing today. ElBaradei was not questioning the proficiency of the armed forces (that’s strictly mamnu’a, verboten, a real no no), but rather he was making a statement about Egyptian society after almost 30 years under President Hosni Mubarak, suggesting that the discipline and self-sacrifice that was necessary to take on the mighty Israeli army in October 1973 had been lost.

Now, it is important to understand that the regime had been after Eissa for quite some time, and the new owners, who include the head of the Wafd party, seemed all too willing to help. Although one ruling party stalwart told me that Eissa was fired because of personality differences with the ownership, the opposition wondered aloud whether there was a deal on the table between the government and the Wafd. Eissa’s head was the price for better returns for the Wafd in the upcoming parliamentary elections, all at the expense of the Muslim Brotherhood. It turns out that ElBaradei’s article eventually ran the day after Eissa’s firing, proving for some that the whole thing was less about ElBaradei and more about getting Eissa.

The whole “yucky” situation, in the words of a talented Egyptian journalist friend, speaks to a larger issue about press freedom in Egypt: there isn’t much of it. To be sure, Eissa was free to say a lot of things for a long time, but when the leadership grew tired of him, they found a way to get rid of him. There is more though beyond the Eissa controversy. On October 14, Egypt’s National Telecommunications Regulatory Authority canceled the licenses of satellite television providers. If they don’t renew—likely to be an arduous task—and want to continue broadcasting, they must do so from state-owned studios. There are also new fees and regulations on text messaging. News outfits now need to get a separate license to send out articles via text message. It’s no coincidence this is all happening now. So much for independent coverage of the upcoming People’s Assembly elections…

What has Washington said about all this you might be wondering? Here’s a quote from senior U.S. official: “…I would say broadly that we in the last several years, in the last 5 or 6 years, have seen an opening of the space of journalists, for freedom of expression, and certainly some of the events of the last couple of weeks by private news organizations, whether newspapers or TV stations, are cause for concern.”

It seems that Egyptian officials aren’t the only ones well-practiced in truthiness.