John Cassidy is right.  The leading US export to China is high-quality housing debt.

The toxic waste generally went elsewhere – thought there are now hints that China (perhaps the state banks) may have bought a few triple AAA rated CDOs composed of the tranches of subprime-mortgage backed securities.   We just don’t quite know much of this ended in China  -- or where the rest went. Elsewhere in Asia?  Europe?  US hedge funds? US money market funds?

But we do know that China provided – through its purchase of Agency bonds and other mortgage-backed securities – an awful lot of credit to American households over the past two years.

During that period, the US sold – according to the BEA -- $48b of goods to China.

That total was dwarfed by the $83.5b of Agencies and $22.5b of long-term corporate bonds that China bought.  “Corporate” debt includes mortgage-backed securities that do not have an Agency guarantee – and China is widely thought to have been a big buyer of these securities.  Combine Chinese Agency and corporate bond purchases together, and it is not all together out of the question that China bought $100b of US housing debt between mid-2005 and mid-2006.   Most of this was the still-good stuff, not subprime.

We know, for example, that China bought as many -- $51.5b -- of MBS backed securities with an Agency guarantee (Agency MBS, a subcategory of Agencies) as it bought US goods.

Over that period China also bought $87b worth of Treasuries.

And that was back when China wasn’t really adding to its reserves all that fast.
It is almost certainly buying a lot more US debt -- and US housing debt -- now.

That likely translates into even larger purchases of US debt.

It though is impossible to get an accurate read on just how much US debt China has purchased.    There is a bit of data – from the TIC.   But regular readers know that I think the TIC fails to record all Chinese purchase.

From mid-2005 to mid-2006, the TIC data suggested that China bought about $40b of Treasuries and $34b of Agencies.   The Treasury's survey data doubled that – and then some.    The survey data also – for what it is worth – adjusted China’s purchases of corporate bonds down a bit.     Overall though, the survey data added about $90b to China’s total purchases, basically doubling the total ($194 v $104b for mid-05 to mid-06; the increase was proportionally larger for mid-04 to mid-05).

All this means that, well, we really don’t know just how much US debt China has bought over the past year.    The US data shows $30b of Treasuries, $62b of Agencies, $36b of Corporate debt and $4b of equities – but that total increase is small ($131b) relative to the increase in China’s foreign assets (estimated at $390b …)

Consider the following – formerly top-secret – chart.   It shows Chinese purchases of various US bonds (and the “foreign bonds” China bought from US residents) relative to China’s estimated reserve growth (counting reserves shifted to huijin and the state banks) and the purchases required to keep China’s dollar holdings at around 70%.   All data is presented as a rolling four quarter sum. 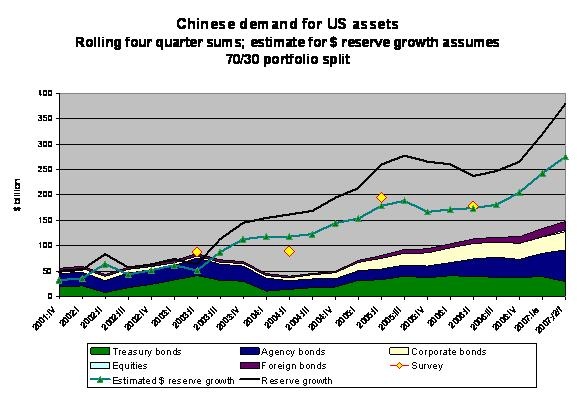 A few things stand out.

1.  China is buying more US debt – as one would expect, based on the increase in its reserves.

2. There is a huge gap between recorded inflows in the TIC data and Chinese reserve growth from mid-2003 on.

3. The survey data tends to reduce the gap, and generally shows Chinese purchases that are close to what one would expect if China was buying enough US dollar-denominated bonds to keep the dollar share of its portfolio around 70%.

4.  China has increased its purchases of Agencies and corporate bonds significantly over the past few quarters.

I used a bit of alchemy to transform the available data into an estimate of what the next survey likely will show – I assumed it will show that China bought a lot more US debt, and I assumed that the shift toward agencies and corporate bonds in the TIC data will be replicated in the survey data.    The last assumption is a bit debatable -- the last survey revised Chinese holdings of Treasuries and Agencies up, but actually lowered the estimates of China's holdings of corporate bonds.   However, the anecdotal evidence -- along with Keith Bradsher's reporting -- indicates that China was a bit more adventurous over the past year. 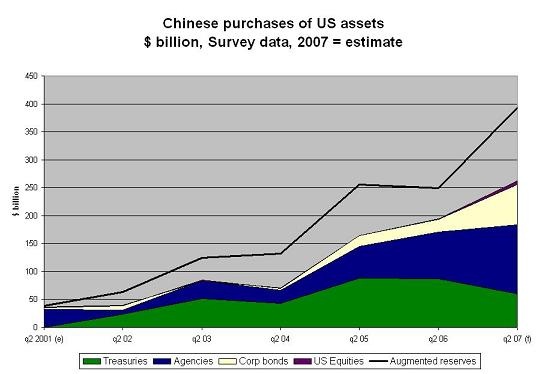 Sum up its estimated agencies and MBS purchases, and it could easily have bought three times more US housing debt than US goods … 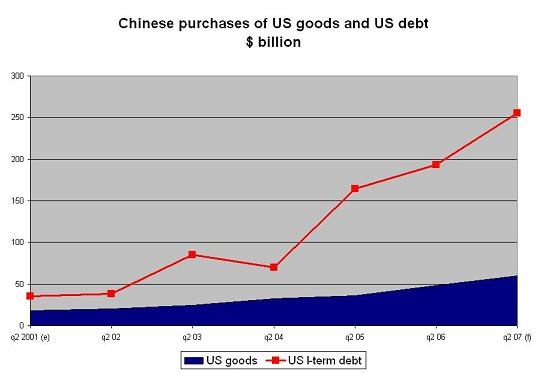 In some deep sense, this whole system is nuts.

China is a poor country.  It is buying this debt on terms that almost guarantee enormous financial losses for Chinese taxpayers simply from the RMB's appreciation against the dollar.

Plus, Chinese demand for safe assets – and the resulting low-yields on those assets – also helped to induce a lot of the excesses that are now clogging up the arteries of the US financial system.

At the same time, if China stopped buying -- especially now, when the private market is clogged up -- US financial markets would really seize up.

The US is in a position where it has no realistic alternative to ongoing financing from China -- at least in the short-run.   In the long-run, though, I continue to believe that the scale of China's dependence of the US to provide financial assets that will retain their value and the United States dependence on credit from China is unhealthy for both parties.

The Rise and Fall of Great Powers? America, China, and the Global Order