Skip to main content
Our Test Scores Are In 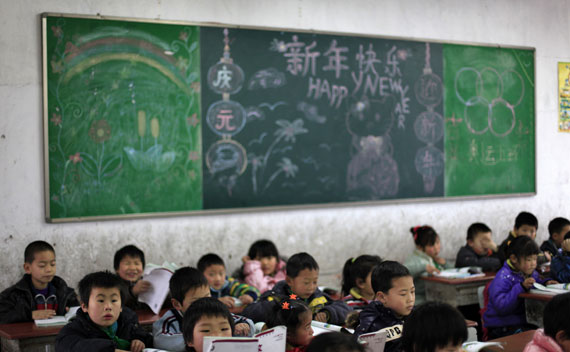 The results for the most recent Program on International Student Assessment (PISA), which tests fifteen-year-old students on math, reading and science, are out.  Once again, U.S. students finished in the middle of the pack, with their best finish being 17th place in reading.  Or if you prefer to see your glass as half full, their worst finish was 31st in math.

The big news, though, is that students from Shanghai tested off the charts, easily surpassing the second-place finisher in each category.  The test results will undoubtedly get big play in the next few days—the New York Times put it on the front page today—and spark a lot of hand-wringing here in the United States.  But before we have another round of op-eds lamenting America’s decline, five points are worth keeping in mind.

1.  Shanghai’s scores are impressive, but they likely aren’t representative of China as whole. Educational opportunities are significantly better in Shanghai than in much of the rest of China, especially in the countryside.  So if PISA had tested a representative sample of Chinese fifteen-year-olds, China’s scores would be likely much lower, and we would be spared the China-is-rapidly-pulling ahead stories we are bound to hear.

2.  There is nothing new here. U.S. students have been middling performers on these international standardized tests for three decades now.  The U.S. economy remains remarkably innovative and inventive, the current economic downturn notwithstanding.

4.  PISA scores say something, not everything. Math, reading, and science tests reveal only part of the story about ability.  We test for these skills because we can measure them.  Other attributes of ability such as creativity and imagination can’t be measured, so we don’t test for them.  But they remain critical skills and at least some of the countries that do well on PISA want to unlock the secret of how American schools encourage creativity and imagination.  As Singapore’s former minister of education told Fareed Zakaria, “We know how to train people to take exams.  You know how to use people’s talents to the fullest.  Both are important, but there are some parts of the intellect that we are not able to test well, like creativity, curiosity, a sense of adventure, ambition. Most of all, America has a culture of learning that challenges conventional wisdom, even if it means challenging authority.”  Overreacting to the PISA results increases the chances we end up like talent evaluators for the National Football League who spend so much time fixated on measurables such as 40-yard dash times that they fail to notice whether players can play the game.

5.  The hand wringing over PISA will be most intense where we need it least--affluent suburban school systems. I’m not worried about how schools in the upper half of the distribution are doing.  Watching my four teenage children and their friends navigate high school, I can safely say they take more challenging courses than I ever did, they have more homework than I can remember doing, and they feel much more pressure from their teachers to excel on standardized tests.  (No one in my high school in the late 1970s ever took an SAT prep course.)  My concern lies with schools in the bottom half of the distribution.  The high school graduation rates say it all.  Only three of four white students graduate from high school, and slightly more than half of black and Hispanic students.  That’s a lot of talent we could be developing.  It’s a problem we need to fix regardless of how we do overall on PISA-style tests.