China's Vice-Premier Wu Yi, the Economist, Stephen Roach,  William Pesek and no doubt a host of others all have argued that the US trade deficit with China has nothing to do with the RMB/ dollar.

Look at the following graph.  It shows the US goods trade deficits with Asia, the US oil balance and the US goods deficit with everyone else.

To make the numbers jump out, I plotted the change in the goods trade deficit from its end 2002 level of $480b.  It subsequently rose to a high of $850b in q3 2006 (using a rolling four quarter sum to get annual data) before falling a bit.  The graph tries to show what drove the deficit from $480b to $850b. 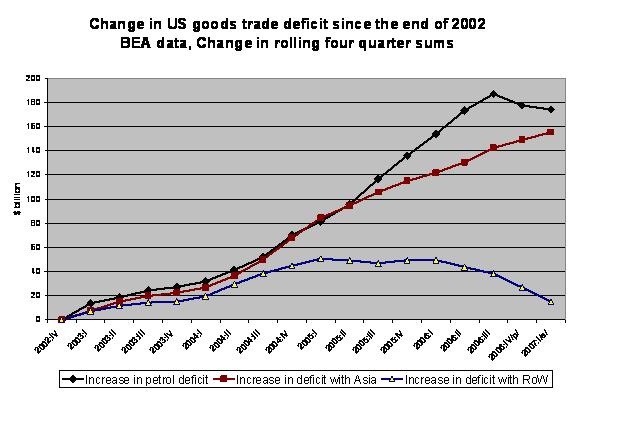 And even if the US trade deficit -- which depends on both export and import growth -- didn't come down when the dollar started to fall, it is clear that the 2003 slide in the dollar had a much more immediate impact on the pace of export growth.

Just look at the acceleration in US export growth to Europe. 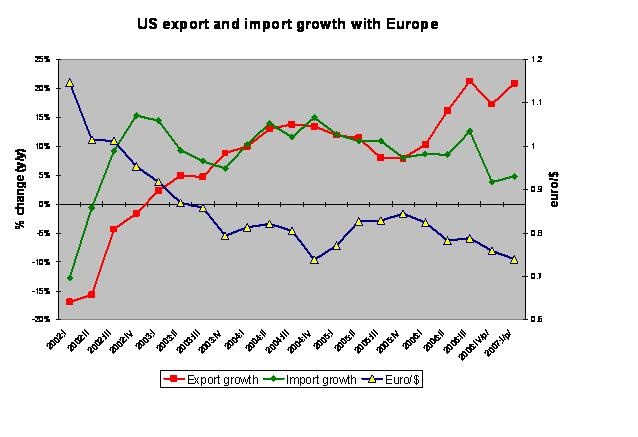 The acceleration in export growth that followed the dollar's decline against the euro is, I think, more or less what the latest econometric analysis tell us should happen.   Changes in the real exchange rate tend to have a bigger impact on US exports than imports.

The dollar isn’t the only factor that influences the trade balance.   Relative growth rates matter.   In 2004, the US was growing much faster than Europe.  By 2006 and 2007, though, things had changed.  Combine a weak dollar with stronger growth outside the US than inside the US and presto, a shrinking deficit.    The expected adjustment did happen.

And pretty soon, the income balance is likely -- at least in my view -- to turn negative.  That won't help the current account deficit.   The world's central banks better be prepared to finance the US for a long time ...

One technical note.  The BoP series that I use for these graphes hasn’t yet been updated for q1, so I drew on the trade data to estimate the q1 deficit with various parts of the world.   The balance for the rest of the world has been calculated as a residual.  It is the goods deficit - the deficit with East and South Asia - the oil deficit.

Private capital now flows to places that don&#8217;t need it