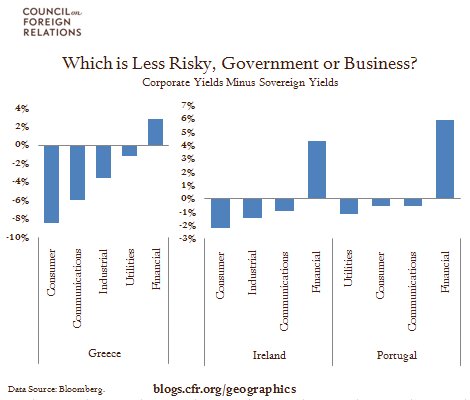 The risk of corporate debt is often measured by looking at the spread between its yield and similar ‘risk-free’ government debt. The higher the spread, the greater the risk. However, when government credit comes into question, this spread is no longer suitable as a measure of corporate risk. The spread does, nevertheless, tell a story about relative risk. In Greece, Ireland, and Portugal, a number of sectors have negative corporate spreads, suggesting that firms are either less likely to default than their governments or will have higher recovery rates if they do default. The sector that stands apart as being much riskier than the government is financials. If these governments partially default, the guarantees they have made to the banking system are no longer credible, and the credit losses may be severe.